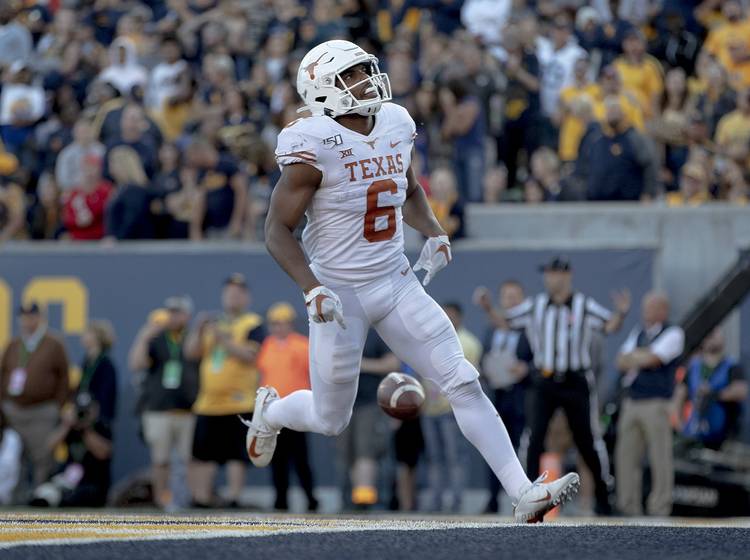 MORGANTOWN, W. Va. — There were 151 snaps taken in Texas’ 42-31 win over West Virginia on Saturday. Here are five that ended up making a big difference:

After winning the coin toss, Texas deferred and kicked off to a Mountaineers offense averaging 25 points per game. West Virginia wasted little time in giving an announced crowd of 62,069 something to cheer about. Aided by a personal foul penalty on B.J. Foster and D’Shawn Jamison’s pass interference call, West Virginia went 76 yards in four plays.

On that fourth play, quarterback Austin Kendall found Sam James — West Virginia’s leading receiver — for a touchdown. James, covered by Foster, made a beautiful diving catch in the end zone. The 44-yard touchdown was upheld by a review.

The UT defense has now surrendered a first-series score in three of its five games. LSU and Oklahoma State both kicked field goals on their first drives. Louisiana Tech was in position to score, but missed a 43-yard field goal try.

West Virginia led twice on Saturday, but its last lead lasted for just over five minutes. Texas tied the game 14-14 with 7:56 left in the first half when Sam Ehlinger threw a 13-yard touchdown pass to John Burt. Later, Ehlinger scored on a 13-yard run and the Longhorns didn’t trail again.

The touchdown was Burt’s first since the 2017 Texas Bowl. A fifth-year senior, he appeared in only four games last year as he took advantage of the NCAA’s new redshirt rule. He did not practice this spring as his duties as a hurdler on UT’s track and field team took precedence.

On Saturday, Burt became the eighth Longhorn to catch a touchdown pass this season. In the first quarter, freshman Malcolm Epps was the seventh. Last year, UT’s 28 touchdown catches were split among seven players.

“(The receivers) can rely on each other. We all trust each other,” said senior Devin Duvernay, who led UT on Saturday with 86 receiving yards. “”We’re all equally equivalent of making that play or making that touchdown.”

In the process of corralling the first interception of his career, Jamison set the bar high for any future turnovers. In the third quarter, a leaping Jamison got one hand on a pass intended for James. He then wrestled the ball away from the Mountaineers freshman.

Jamison’s interception was recorded on West Virginia’s first snap of the second half. The Mountaineers trailed 21-14 at halftime. But the WVU defense had forced Texas to punt to midfield on the second half’s opening possession.

Jamison intercepted another pass in the fourth quarter. The sophomore cornerback’s two-pick performance came one game after he earned the first defensive start of his career. Jamison signed with Texas as a four-star defensive back, but the Longhorns moved him to offense last season. Jamison recorded four catches and one start as a converted receiver, and he also scored on a punt return.

4. From receiver to runner

Texas punter Ryan Bujcevski and his West Virginia counterpart, Josh Growden, combined for five punts in the third quarter. The Mountaineers did kick a 29-yard field goal during the low-scoring quarter.

Bujcevski once again punted on the fourth quarter’s second play, but Texas soon got the break it needed. A Foster interception set the Longhorns up at the West Virginia 18. After an incomplete pass and a five-yard gain by running back Roschon Johnson, Duvernay lined up in the backfield and finished off the touchdown drive with a 13-yard run.

Duvernay told reporters after the game that he got a few snaps at running back in high school. He has now logged five carries at Texas, but that was his first rushing touchdown.  Thanks to a six-reception effort, Duvernay left Morgantown locked in a second-place tie with SMU’s James Proche on the NCAA’s receptions leaderboard.

Texas went into cruise control following Duvernay’s touchdown as its lead never dipped into single digits. West Virginia, however, did score twice in the fourth quarter. Due to those late scores, the Longhorns’ game-winning touchdown was technically scored by … an offensive lineman.

Following Jamison’s second interception — UT’s fourth of the afternoon — Texas found itself on the West Virginia 33 with 12:25 left. After Johnson gained 14 yards on two carries and Jake Smith contributed a 7-yard catch, Ehlinger rolled to his right and then threw a backward pass across the field. Awaiting  was left tackle Samuel Cosmi. After making the catch, the 300-pound left tackle sprinted upfield and survived a collision with 292-pound defensive lineman Darius Stills at the goal line.

The touchdown put Texas up 35-17. It was later revealed that the trick play is called “Moses” in honor of Cosmi’s offensive line coach at Humble Atascocita, Todd Moses.