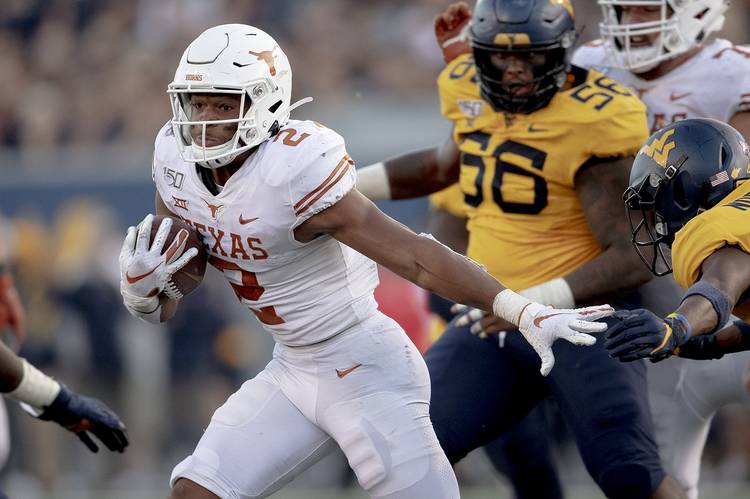 Texas running back Roschon Johnson (2) runs with the ball against West Virginia during an NCAA football game on Saturday, Oct. 5, 2019, in Morgantown, W. Va. [NICK WAGNER/AMERICAN-STATESMAN]

Roschon Johnson, the quarterback from Port Neches-Groves, is blossoming into one of Texas’ best running backs. The freshman cranked out his first 100-yard game in Saturday’s 42-31 win at West Virginia.

Nobody can play two positions at once, so what exactly is Johnson’s future at Texas?

“I’m kind of going along with it,” Johnson said Saturday in his first interview since the position change. “We’ve discussed with coach (Tom) Herman that I’m going to switch back to quarterback after this season, but I’m just taking it day by day. Just contributing to the team right now.”

Does Johnson consider himself a true running back or a true quarterback playing a different position right now to help the team?

No. 11 Texas (4-1, 2-0 Big 12) will keep Johnson in the backfield this week against No. 6 Oklahoma (5-0, 2-0) in the Cotton Bowl. He’ll likely stay there the rest of the season, too. Make a mental note to monitor Johnson’s position status when the offseason begins, whenever that may be.

Johnson was considered the nation’s 14th-best dual threat quarterback prospect in high school, according to 247Sports’ composite ratings. He threw for 2,343 yards and 24 touchdowns as a senior. He also averaged 6.7 yards on 244 rushing attempts. He scored 26 touchdowns on the ground while running straight to high school All-American status.

He enrolled early at UT to get a jump-start on learning the offense, and Johnson was the third-string quarterback when preseason practice began.

Watching all the depth fall to the wayside, coaches looked around to see who could help. Herman and the offensive staff weighed moving freshman slot receiver Jake Smith over to running back. It was decided that would stunt Smith’s overall growth.

Coaches ultimately approached Johnson, who had a team mindset and dynamite athleticism. “Even though he had never played that position, the cost benefit was much more slanted to benefit on Roschon’s side than Jake’s,” Herman said on Sept. 16.

Johnson said he planned on redshirting this season and “sit back and just learn.” Injuries to others opened this running back door, whether Johnson was ready or not.

“Coach Herman told me the situation at running back and the things that he needed to get done,” Johnson said. “I told him I’d step up. I’d be willing to do it. Things haven’t turned out exactly how I planned. But honestly, I’ll do anything for this team, whether that’d be playing running back or wherever. I’m just rolling with the flow right now.”

This is a results-oriented business. Right now, Johnson is getting results at running back. He ran hard against LSU, getting 32 yards on seven carries. He caught a 25-yard touchdown pass on a wheel route against Rice and got his first touchdown on the ground against Oklahoma State.

Johnson added another strong performance against the Mountaineers.

On a drive early in the second quarter, he caught a pass for 10 yards. Then he ran for gains of 4 and 6 yards on consecutive plays. He later had another 6-yard gain that moved the ball to the WVU 13-yard line. The next play, Sam Ehlinger threw a touchdown pass to John Burt.

Johnson finished with 121 yards on 21 carries — an average of 5.8 yards per clip. A lot of those carries were dictated by Ingram’s second quarter absence. Ingram had to be checked out by trainers temporarily before returning to the game.

This isn’t a surprise to those in the locker room.

“Roschon, he’s learned it so quick,” Ingram said in early September. “He’s taking it all in. Any chance he gets, he’s putting in the extra work in film session. He’s asking questions, being real mature about the situation. I feel like we’ve got the right guy in the room.”

In 2020, Ingram is scheduled to play his junior season. Young would be a senior. Texas has a commitment from five-star running back Bijan Robinson from Tucson, Ariz. As UT is showing this season, you can never have too many backs.

At quarterback, Ehlinger is likely to return for his senior season, according to some inside the program. Backup Casey Thompson would be a sophomore. The Horns also have commitments from two standout quarterbacks — Hudson Card of Lake Travis and Ja’Quinden Jackson of Duncanville.

None of this is to say that Johnson should stay at running back or demand a move back to quarterback. There is too much football left in 2019 before anyone engages in serious discussions about any of it. In Herman’s mind, the issue is tabled until the calendar flips to 2020.

For the moment, Johnson is like most freshmen. He’s simply happy to be on the field.

“(Running backs coach) Stan Drayton, he’s an amazing coach, and he really, really harps on the fundamentals of the game,” Johnson said. “Sometimes it may not feel natural, but I’ve been practicing the technique of running back and all of the things that come with it.”

At least Johnson has one key running back trait down pat. Always compliment the offensive line. In this respect, he looks like a Doak Walker Award contender.

“So it’s credit to (Drayton) and just my guys up front,” Johnson said. “They’re making it easy for me.”