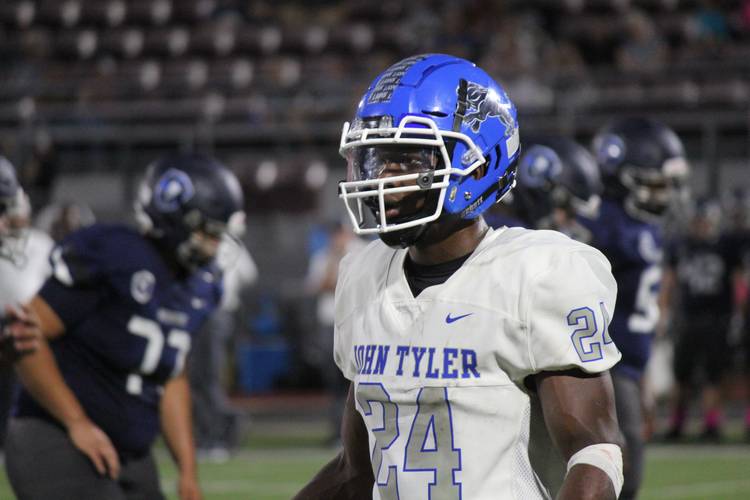 WYLIE — Tyler John Tyler cornerback Kitan Crawford lurks in the shadows of Texas’ 2020 recruiting class. That’s a testament to the quality of the prospects pledged to Tom Herman’s program. Crawford is a four-star ranked as the 11th-best cornerback in the nation and as a national top-180 prospect.

He’s not necessarily under-ranked as he is under-appreciated.

Crawford picked Texas on June 21 over 22 other offers, including Tennessee, Arkansas and Baylor. The 5-11, 200-pound prospect starts at corner and running back for John Tyler, which raced past Wylie East last Friday. Crawford put on a show, catching a 52-yard touchdown in the second quarter and returning an interception 56 yards for a touchdown in the fourth.

“My job is to help my team, whether that’s on offense or defense,” Crawford said after the game. “I want to play as much as possible. This is what I love to do and it is a challenge. It was cool to score on both sides of the football.”

“He played timid as a sophomore, and I’m not sure he really trusted his talent,” Holmes said. “He learned that he can’t afford to take days off and be ‘the guy.’”

Crawford isn’t allowed to take off many plays as a senior with his responsibilities on both sides of the field. The Texas commit credits his relationship with UT cornerbacks coach Jason Washington for getting the East Texas star to commit.

“Coach Washington is like a step-father. We’re real close. I can call him at midnight and he’ll pick up the phone,” he said. “ I trust coach Herman and the staff.”

Texas has 20 commitments for the 2020 class, which ranks fifth in the nation and first in the Big 12. Crawford is one of three pledged cornerbacks, ranking between Winter Park, Fla. four-star Ethan Pouncey and Aldine MacArthur four-star Joshua Eaton. Thirteen of Texas’ commits, including Crawford, are national top-200 prospects.

“Texas felt like home. Everyone was so welcoming to me. It’s hard to find that, so I pulled the trigger,” said Crawford back in June. “It was my third or fourth time down there, and it’s always felt great.”

“I committed in the summer in order to focus on my senior season and helping this team,” he said. “It feels good to know where I’m going. I get to just be a senior and play football with my friends.”