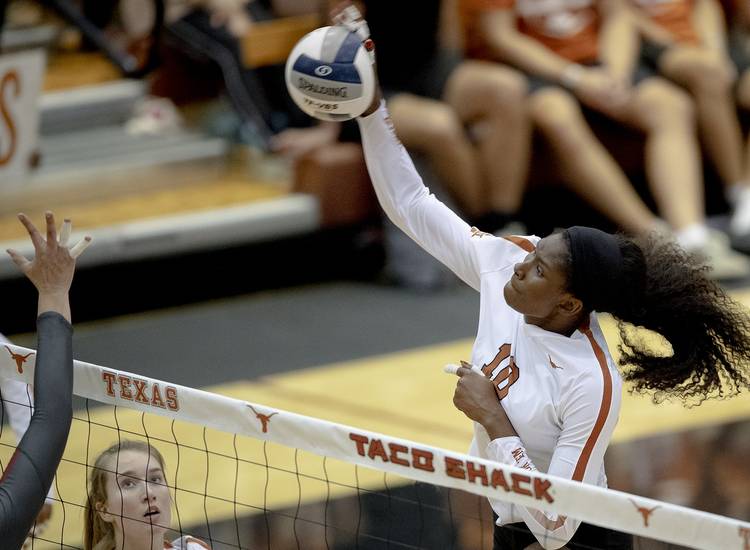 Brionne Butler, seen in a previous match, has been hampered by an injury this season but played all three sets Saturday. [NICK WAGNER/AMERICAN-STATESMAN]

Brionne Butler’s impetus toward a return to prominence gained some steam Saturday night.

Butler, the sophomore middle blocker who missed the Longhorns’ first eight matches with what a team spokesperson called a lower body injury, played in three sets for the first time since her return. Butler, a first-team All-Big 12 member as a freshman, made 10 kills with strong .471 hitting accuracy as the fourth-ranked Longhorns defeated Oklahoma 25-17, 27-25, 25-20 in front of 4,057 at Gregory Gym.

Before Saturday, the 6-foot-4 Butler had appeared in seven sets over five matches.

Sophomore Logan Eggleston had her fourth double-double of the season, leading the Longhorns with 12 kills and 11 digs.

Butler said she was injured during preseason practice.

“It feels good to finally be back out there,” Butler said. “I’m close to who I want to be. I’m just limited to the amount of jumps I can take (in practice).”

“You look at her numbers, and they are off the charts,” Elliott said. “She’s obviously one of the best middles in the country, and we got to get her involved.”

That Texas team reached the national semifinals. The Longhorns were national runners-up the next two seasons but missed the final four in 2017 and ’18 when they had to play in regionals at Stanford and BYU.

Elliott’s goal every year is for the Longhorns to become one of four regional hosts, an advantage they had en route to the 2015 and 2016 final fours.

That ambition is reasonable thanks to a nonconference schedule strong enough to earn Texas the No. 2 spot in the first NCAA RPI computer ranking of the season, which was released Monday.

The Longhorns can further advance their case with two matches against No. 1 Baylor, the first of them Oct. 23 at Gregory Gym.

Oklahoma led for a good chunk of the first set Saturday. Then Texas assembled a devastating 7-0 push for a 24-16 lead. Butler led the Longhorns with five kills and .833 accuracy in the set. Texas outhit Oklahoma .375 to .200. Gabriel served up three aces.

Oklahoma was much more competitive in the second set, falling behind 9-2 but taking a 25-24 lead with a kill by Dunbar, the Sooners’ go-to hitter. But senior Micaya White grabbed the lead back with a kill and an ace, and then freshmen Molly Phillips and Asjia O’Neal teamed up to block Dunbar and finish the set.

Elliott was unhappy with the Longhorns during that set.

Elliott was generally unimpressed with his team, which hit a paltry .105 in the third set.