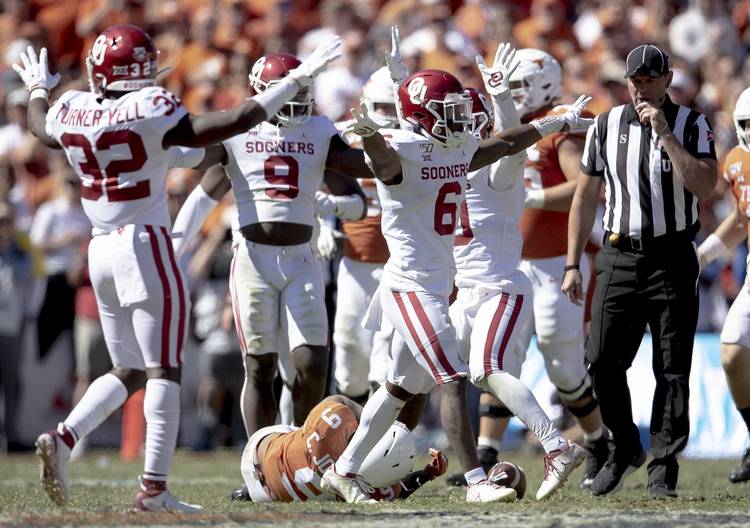 DALLAS — The Cotton Bowl scoreboard said Texas lost to rival Oklahoma by a touchdown, 34-27 for those who care about specifics. Somebody will see that score Sunday and think it was another close, epic shootout.

But this felt like a Red River rout, authored by OU’s Jalen Hurts.

“Yeah, I thought we pressed,” Texas coach Tom Herman said. “Obviously we’ve got to tackle better. You know, way too many missed tackles.”

Where was the team that thumped OU and Georgia? That group that stood toe to toe with LSU maybe got lost on the Midway.

Early on, UT’s Anthony Cook hammered Hurts, knocking the ball loose for a turnover. Senior safety Brandon Jones also picked off a pass in the end zone, stopping another OU drive. But Hurts still ran for 131 yards, threw for 235 more and accounted for four touchdowns.

“Good plays really come and go, but those bad plays stick with me for a long time,” Jones said. “When I think about this game — the missed tackles, letting CeeDee make that catch and me not getting him on the ground — those plays that aren’t good really stick with somebody.”

“I’ve obviously not done a good enough job leading these guys if we do some of the stuff we did today,” senior center Zach Shackelford. “A lot of those were my fault.”

Miami also had nine sacks against Texas in the disastrous 1991 Cotton Bowl, and Nebraska had nine in the 2009 Big 12 championship.

“It’s one of those things where it was self-inflicted, so it’s a good and bad thing,” Ehlinger said of the mistakes. “It wasn’t like we had no shot. We didn’t do everything we could to win. In order to beat a top-10, top-five team like that, that’s what you have to do.”

Oh, it got worse for the Horns.

Senior defensive end Malcolm Roach got ejected for targeting. By NCAA rule, he will be suspended for the first half against Kansas next Saturday.

Senior receiver and newly-named team captain Devin Duvernay made some disastrous decisions on kick returns. He ran two out of the end zone that should have been touchbacks, bobbled and dropped one at the 5-yard line and caught one that appeared to be going out of bounds.

“I made a couple of bad decisions,” Duvernay said. “I should have fair caught some of them. I was just trying to get something going.”

The OU half of the crowd of 92,100 had a whale of a time taunting Texas’ B.J. Foster. His comments about Hurts on Tuesday started a rather sizable brushfire in Norman. Fox cameras caught him whiffing on one tackle attempt, a slow-motion shot likely to make Hurts’ Heisman highlight film.

“Yeah, man. I don’t really do all the trash talking,” Foster said. “They took it how they took it. He’s a great player. Played a great game today.”

The sixth-ranked Sooners (6-0, 3-0) ran around the field celebrating with the Golden Hat trophy and living it up, as the winners typically do. Maybe these two teams will meet again at the Big 12 championship game. The Horns, who now statistically have the one of the worst defenses in the Big 12, clearly have issues to address.

There was quite the dustup a half-hour before kickoff. Players from both teams came together at midfield for some classic rivalry jaw-boning. Then, a penalty flag went flying into the air. Big 12 official Mike Defee said “every player” was being flagged for unsportsmanlike conduct.

OU coach Lincoln Riley speculated the brouhaha started because both teams were punting toward midfield. Still, with that kind of blanket proclamation, any player who got another unsportsmanlike foul during the game would be automatically ejected, Defee announced.

“I’m not sure there weren’t punches thrown,” Defee told a pool reporter afterward. “I got hit a couple times. My head linesman got hit.”

Once the game began, the Sooners were landing haymakers. Kennedy Brooks opened with a 23-yard run around the left end. Hurts found Nick Basquine for a 17-yard gain with no UT defender in sight. Hurts’ 1-yard throw to Lamb capped a relatively easy 66-yard drive.

Cook forced a fumble on OU’s next possession, then Hurts threw the ball to Jones for another turnover. Texas wasn’t converting off the mistakes, though. OU went up 10-0 on Gabe Brkic’s 19-yard field goal.

Texas had 12 rushing yards total at halftime compared to OU’s 165. Things finally got cooking in the third quarter when Roschon Johnson broke loose for a 57-yard run, the longest rushing play in Herman’s three seasons as coach. Johnson finished it off with a bruising 4-yard run. The backup finished with 95 yards and may have a strong claim to the starting job soon.

It was still a three-point game after Ehlinger’s 2-yard touchdown run at the end of the third. But OU was ready to answer every score thereafter. Brooks’ 42-yard run and Hurts’ 3-yard touchdown run with 4:19 left effectively ended it.

“I expect us to get closer,” UT linebacker Joseph Ossai said. “We’ve faced a lot of adversity and never folded. We’re not going to let this one game dictate our season.”

The Sooners loved this one, to be sure. The Longhorns are now the ones who must regroup. Half the season remains. Time for both teams to put their head down and go to work.

Texas linemen shoulder the blame after nine-sack day, but ‘it’s on everybody’