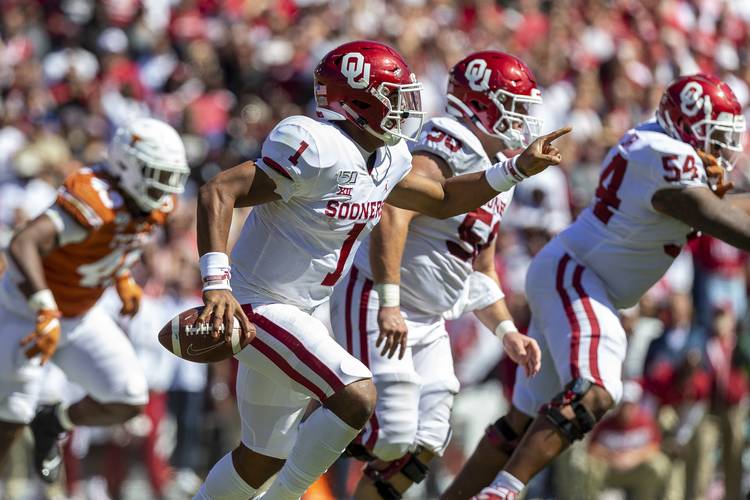 Oklahoma quarterback Jalen Hurts (1) communicates to teammates in the second half of an NCAA college football game at the Cotton Bowl in Dallas, Saturday, Oct. 12, 2019. [Stephen Spillman for Statesman]

Revisiting our five pregame questions that were facing the Longhorns ahead of Texas’ 34-27 loss on Saturday.

1. Did the defense get to Jalen Hurts?

Oh, the Longhorns were able to apply some pressure to the Oklahoma quarterback on some key third downs, forcing him into an interception in the end zone, another near interception in the end zone, some bad decisions and a couple of hurries. But he wasn’t sacked once and shredded Texas for keepers and scrambles for 131 rushing yards. The Sooners, meanwhile, were all over Sam Ehlinger. The Texas quarterback was sacked nine times. The Longhorns have now gone back-to-back games without a sack; OU has allowed only four of them through six games.

2. How many third downs did Texas convert?

That’s a 43-percent success rate. The Horns entered this game ranked No. 2 in the country when it came to converting third downs, at 56 percent. But this was a classic matchup of strengths — Oklahoma ranked fifth nationally in third down defense. The offense struggled throughout the first half, and many of those nine sacks came on third downs. The Sooners controlled both lines of scrimmage. Still, even though Texas had no sacks, OU was fairly abysmal on its third downs. The Sooners were just 3 of 12.

3. Who led the Sooners in rushing?

The graduate transfer quarterback from Alabama is the Sooners’ leading rusher this season. Now we know why. He finished with 131 yards and a touchdown on 17 carries, many of those coming on scrambles out of the backfield when either nothing was open downfield or he could take advantage of catching Texas in man-to-man coverage. He’s the third 100-yard rusher that Texas has allowed this season. The Sooners had the country’s fourth-ranked rushing offense.

4. What did Roschon Johnson do for an encore?

He led Texas in rushing. And he provided a jump-start to the offense in the second half.

The freshman finished just short of a second straight 100-yard game, rushing for 95 yards and a touchdown. But he had only eight carries. He averaged nearly 12 yards a carry, that number weighted by a nifty 57-yard run that had him weaving through the OU defense. That play set up his lone touchdown. Last week he rushed for 121 yards at West Virginia.

5. Did the Longhorns run any trick plays?

It makes sense that Texas would’ve tried something — this was the biggest game on the Longhorns’ schedule and Texas had produced trick-play touchdowns on a Samuel Cosmi lateral pass catch-and-run and a Cade Brewer reverse flea-flicker in the last two games. But Tom Herman or Tim Beck never dipped into their bag of tricks on Saturday. The Sooners did, however, scoring a touchdown on a pitch-back pass from Hurts to CeeDee Lamb.

Texas linemen shoulder the blame after nine-sack day, but ‘it’s on everybody’