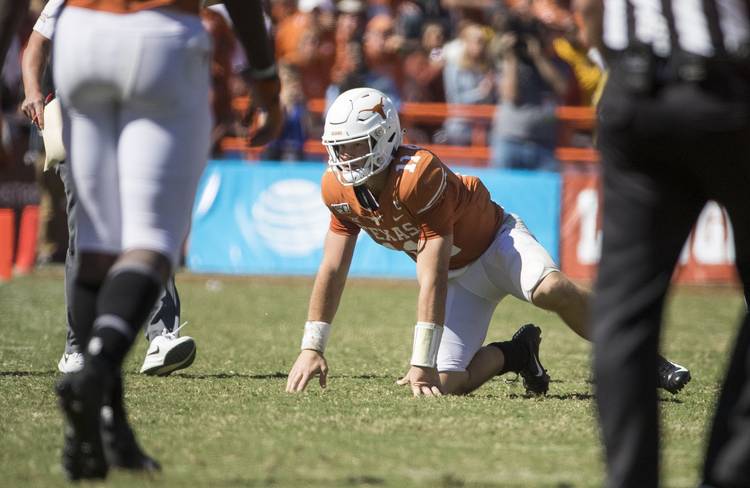 Texas Longhorns quarterback Sam Ehlinger (11) tries to get up after being sacked by Oklahoma at the Cotton Bowl on Oct. 12, 2019 in Dallas. RICARDO B. BRAZZIELL / AMERICAN-STATESMAN

DALLAS — At the Cotton Bowl on Saturday, the Oklahoma defense introduced, re-introduced and then re-introduced itself several more times to Texas quarterback Sam Ehlinger.

Oklahoma registered a season-high nine sacks in its 34-27 win over the Longhorns. Texas had not allowed nine sacks in a game since the 2009 Big 12 championship game. Texas won that 2009 battle against Nebraska and defensive tackle Ndamukong Suh, but the nine sacks proved to be more problematic on Saturday.

Texas coach Tom Herman said there was plenty of blame to go around. The coaches need to do a better job with the protection that’s called. The receivers have to get open. The quarterback has to deliver the ball and the running back has an assignment to handle as well.

“I think every time you see sack numbers, everybody wants to blame the offensive line, but you know, I said before, it’s on everybody.” Herman said. “Certainly, the O-line is going to shoulder some of that blame, but they are not to be blamed entirely.”

Ahead of its trip to Dallas, Texas had allowed 10 sacks through five games. Texas gave up three sacks against West Virginia last week, but Oklahoma State had none on Sept. 21. Oklahoma, meanwhile, was averaging 2.6 sacks per game.

On the Longhorns’ third offensive snap, Ehlinger was dropped for a 10-yard loss. That sack was credited to nose guard Neville Gallimore. Seven of his teammates would eventually get in on the action.

Those nine sacks resulted in a loss of 53 yards, which factored into UT’s total of 100 rushing yards. And 57 of those final 100 yards were earned on one Roschon Johnson carry.

“They obviously have tremendous athletes … they recruit real well. They’ve got good players,” Texas center Zach Shackelford said. “But at the same time, some of that was self-inflicted so we’ve got to clean that up.”

Earlier in the week, left tackle Samuel Cosmi said Gallimore and fellow OU lineman Ronnie Perkins were good but “not anything to worry about too much.” Gallimore recorded two sacks. Perkins had one.

Our offensive line has played good all year but you can’t come out this week and make smart comments then get your QB killed..

Cosmi’s comment seemingly drew the ire of a couple of former Longhorns after the game. Oklahoma linebacker Kenneth Murray, though, seemed unbothered.

Oklahoma coach Lincoln Riley said the Sooners knew they had to play in a way that would affect Ehlinger. “I don’t think it was anything schematically,” Riley said. “We had a good mentality. Alex (Grinch, the OU defensive coordinator) called a great game.”

Shackelford diagnosed the problems on offensive line as communication and execution issues. The Longhorns left the Cotton Bowl in search of answers instead of revenge. When asked about possibly meeting Oklahoma again in the Big 12 championship game, Shackelford said he was only focused on next week’s opponent.

“We’re about Kansas right now,” Shackelford said. “This one’s over. We’ve got to learn from it.”