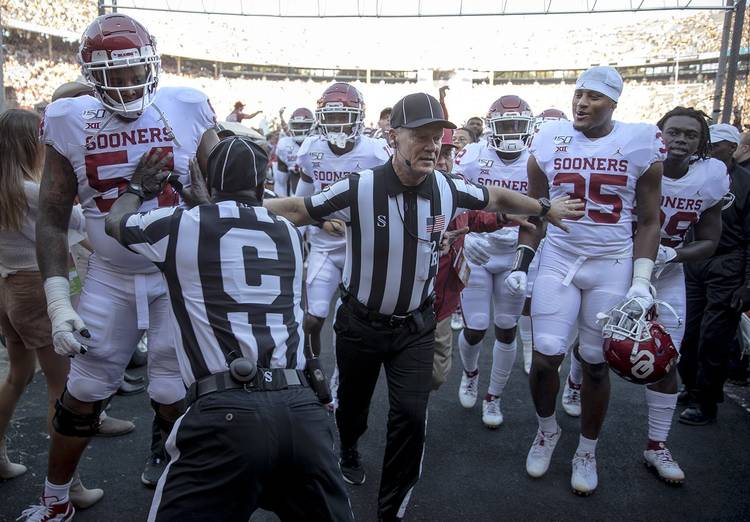 Officials hold back Oklahoma players from entering the tunnel to the locker room so Texas players can clear the tunnel at the Cotton Bowl on Oct. 12, 2019, in Dallas. [NICK WAGNER/AMERICAN-STATESMAN]

DALLAS — Before kickoff on Saturday, the two teams gathered at midfield of the Cotton Bowl.

That impromptu meeting, however, was less than cordial. The interaction was flagged and every player on both teams was given an unsportmanlike conduct penalty. Referee Mike Defee then announced that anyone who was reprimanded for unsportsmanlike conduct during the game would be ejected since that count as their second such penalty.

Here's what happened at midfield just over a half-hour before kickoff that earned a flag. Will someone get tossed for the Horns Down? pic.twitter.com/IulOonjOBx

Defee later explained that in addition to words, some shoves also were exchanged in that pre-game scrum. He claimed that both he and his head linesman were hit and noted that, “It was just clear-cut because I had warned both coaches prior to the start of the game about how we were going to manage pre-game and that we wanted to get this game started without incident.”

Sixteen penalties were called in the game. None were for unsportsmanlike conduct. There was one ejection, though.

Texas senior defensive end Malcolm Roach’s final trip to the Cotton Bowl was an abbreviated one. He was called for targeting on a third-quarter tackle of sliding receiver CeeDee Lamb. After a replay review confirmed the call, Roach was disqualified.

Roach, who’s a team captain, had recorded two tackles and a quarterback hurry.

His ejection will have a carryover effect on the Longhorns. Since he was ejected in the second half, he must miss the first half of Saturday’s game with Kansas.

Johnson returns, then exits: After missing the last three games with a hamstring injury, Collin Johnson led UT in receiving yards. He had 82 yards on six catches. He also drew defensive holding and pass interference calls that set up Sam Ehlinger’s short touchdown run at the end of the third quarter.

Johnson’s day ended in the fourth. While being wrapped up by OU cornerback Tre Brown, Johnson took a hit from Sooners safety Pat Fields. No penalty was called. Johnson left the game and Herman later said he was being evaluated for a head injury.

Texas WR Collin Johnson was shaken up after this hit. No penalty #OUvsTEX pic.twitter.com/x4N1Kaenns

Texcetera: Texas is now 6-8 against top 25 teams in Herman’s three years at the school. … Roschon Johnson’s 57-yard run in the third quarter was UT’s first 50-yard run since D’Onta Foreman had two against Texas Tech on Nov. 5, 2016. … Texas safety Brandon Jones intercepted a pass in the Red River Showdown for a second straight year. … Longhorns receiver John Burt became the first player from either team to appear in six different Texas-OU games.