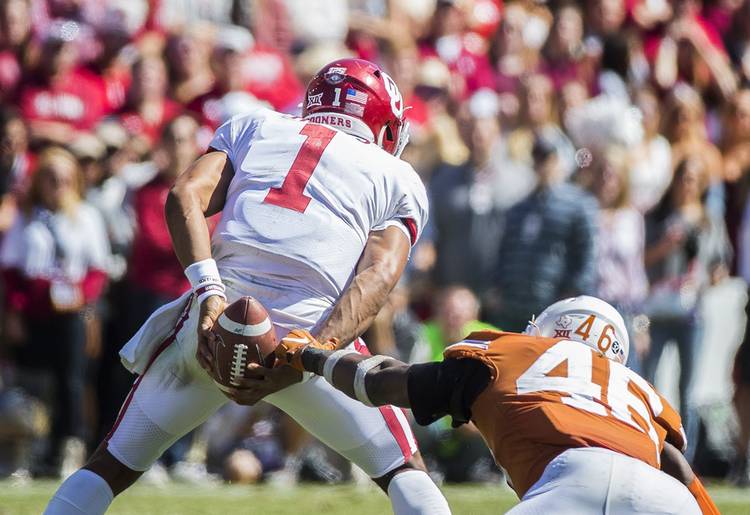 Oklahoma quarterback Jalen Hurts controls the ball behind his back as Texas linebacker Joseph Ossai tries to force a fumble in the third quarter Saturday. RICARDO B. BRAZZIELL / AMERICAN-STATESMAN

DALLAS — Anything worse than the numbers put up during the Charlie Strong era can’t be good.

Halfway through the regular season, the statistics indicate Texas is on pace to have the worst defense in school history. The Longhorns are allowing 453.3 yards per game. That’s higher than the record-setting, stomach-churning totals in 2015 and 2016.

UT’s pass defense is allowing a Big 12-worst 310 yards per game, another figure that’s on pace to be the worst in school history.

Despite nine sacks allowed and a mediocre run game against the Sooners, the Longhorns’ offense isn’t the problem. It’s the defense. That unit will be problematic the rest of the season unless coach Tom Herman and defensive coordinator Todd Orlando find some answers quickly.

“Everybody knows the ‘what,’ ” Herman said after the loss. “The ‘what’ is we didn’t play well, and we pressed. We’ve got to figure out why.”

The secondary is banged up, to be sure. Starting safety Caden Sterns (knee) and corners Jalen Green (shoulder) and Josh Thompson (broken foot) are out. Sterns and Green are expected back later this month; Thompson might not be cleared until November, if at all.

Just three weeks ago, Herman had no issues about those injuries. “I got to be honest with you. I haven’t lost a lot of sleep over it,” he said Sept. 23. “We trust the guys behind them.”

So now, Texas is down four defensive backs, all of whom were expected to get significant playing time.

A banged-up secondary plus a defensive front that hasn’t registered a sack in two weeks is a recipe for major trouble. UT’s defensive line has produced only two sacks all season.

This doesn’t even begin to address the missed tackles.

OU’s flea-flicker play was a perfect example of how things can go wrong. On second-and-10 from the OU 49, Lamb caught a pass from Jalen Hurts at about the Texas 30. Four Texas defenders had Lamb boxed in at the 20-yard line. That’s where he should’ve been brought down.

Lamb shot through Joseph Ossai’s arms and went the distance for a 51-yard touchdown.

Tackling is a fundamental skill. You can’t suddenly get better at tackling in mid-October. It’s something developed in the offseason.

“I think as a team we have to do a lot better job of our Tuesday practices, which are the only full-pad practices during the week,” senior safety Brandon Jones said. “We’ve just got to wrap up. I think a lot of people at times get caught up in wanting to make that big hit. Situationally, the easiest thing to do is get the guy on the ground.”

Herman does not allow his coordinators to do interviews after games. Orlando meets reporters on Wednesdays after practice.

Orlando was the first UT assistant to make $1 million annually when he was hired. The school bumped him to $1.7 million in 2018 to make his pay equal to that of other top assistants nationally. All assistant contracts are guaranteed.

“I’m not hiding from the fact that we’ve got to get better at getting after the quarterback, especially in those situations,” Orlando said last Wednesday. “It’s been addressed, because we do have some really dynamic guys, and we expect more out of them.”

“We’re going to find out who’s really about (winning),” Texas quarterback Sam Ehlinger said. “When times get hard, you find out. You can either come together or you can separate. We’ll figure out who really wants to win and who’s really about it.”

Realistically, there’s now a cap on how far Texas can go this season. With two losses, the Horns are probably out of College Football Playoff contention. But they can still win the Big 12 championship and reach the Sugar Bowl.

Herman is likely to pound that fact into players’ heads and reporters’ notebooks in the coming days.

Fixing the defense comes first, though. Having your defensive numbers tick higher than your predecessor’s is not progress.

“We’ve got to come to work tomorrow ready to learn from our mistakes, accept the feedback and get better,” Herman said.