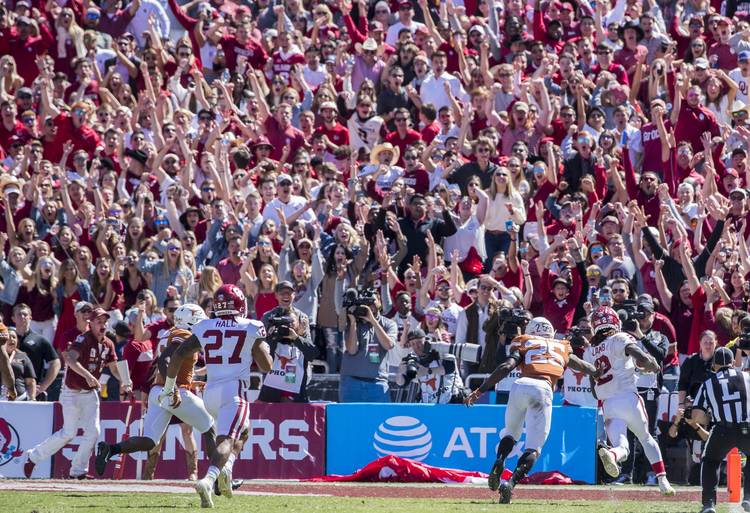 Oklahoma receiver CeeDee Lamb (2) scores against Texas defensive back B.J. Foster (25) at the Cotton Bowl on Saturday in Dallas. RICARDO B. BRAZZIELL / AMERICAN-STATESMAN

DALLAS — There were 139 snaps taken in Texas’ 34-27 loss to Oklahoma at the Cotton Bowl on Saturday. Here are five that ended up making a big difference:

1. Going for it early

After an adventurous pregame that featured every player receiving an unsportsmanlike conduct penalty, Oklahoma won the coin toss. The Sooners elected to open the game with the football. After the kickoff, Oklahoma needed only one play — a 23-yard run by Kennedy Brooks — to move into Texas territory.

Oklahoma eventually faced a third-and-goal at the UT 9, but receiver CeeDee Lamb was stopped short of the goal line on an 8-yard reception. The OU offense remained on the field. Quarterback Jalen Hurts then found Lamb for the score.

The fourth-down conversion was Oklahoma’s fourth of the fall. The Sooners had scored on only one of their previous three tries. Later in the game, Oklahoma would fail on fourth down for the first time this season.

With time winding down in the first half, UT quarterback Sam Ehlinger drove his offense from the Texas 21 to the Oklahoma 31 in seven plays. Inside the Oklahoma 40 for the first time, Texas sent Cameron Dicker out for a 49-yard field goal.

Dicker beat Oklahoma last year with a 40-yard kick in the waning seconds, and the Sooners attempted to get in the sophomore’s head this time. With six seconds remaining, OU coach Lincoln Riley called three straight timeouts. The attempts to ice Dicker were unsuccessful, and his 49-yard field goal got the Longhorns on the scoreboard. Texas still trailed 10-3, though.

The field goal was UT’s eighth-longest against Oklahoma. It also helped UT avoid its first first-half shutout since a 24-0 loss at Iowa State on Oct. 31, 2015.

For most of the 115th meeting between Texas and Oklahoma, the Sooners held a lead. Oklahoma needed just over five minutes to break the scoreless tie at the start of the game. A 10-10 score also existed for 63 seconds in the second half.

The second tie was established by UT freshman Roschon Johnson’s 4-yard touchdown run with 8:48 left in the third quarter. That touchdown, though, might have been the least impressive of Johnson’s four touches on the seven-play drive. Johnson kept the possession alive with a 9-yard catch on a third-and-8 play. He also set up his score with a 57-yard run.

The 57-yarder was the longest run of Tom Herman’s 33-game tenure at Texas. D’Onta Foreman’s 74-yard touchdown against Texas Tech in 2016 had been the Longhorns’ last 50-yard run.

This flea-flicker was one of them 🔥

Oklahoma wasted little time in breaking that 10-10 tie. On the third play of the next drive, Hurts handed off to Brooks. Then Brooks pitched the ball back to Hurts, and the senior quarterback delivered a pass to Lamb. Initially undetected by the Texas secondary after going in motion ahead of the snap, Lamb danced around five Longhorns on his way to a 51-yard score.

The trick play served as a measure of revenge for the Sooner State. Three weeks earlier, Texas ran a flea-flicker against Oklahoma State. Cade Brewer’s 25-yard touchdown catch on the play gave UT a 28-23 lead in a game it went on to win 36-30.

On three occasions in the second half, Oklahoma built a double-digit lead. Texas, though, responded each time with a score that kept the contest close. And with 1:49 left, Ehlinger’s 4-yard run made it a 34-27 ballgame.

After Texas was unable to corral the onside kick, the Longhorns stopped Brooks for a 4-yard gain and used one of their remaining two timeouts. Facing a second-and-6, Oklahoma kept the football in Hurts’ hands. He rushed for 10 yards to seal the win for Oklahoma.

Hurts finished with 131 rushing yards, and Brooks ran for 105 yards on 10 carries. It was the second time in three games that the Longhorns had allowed two 100-yard runners.