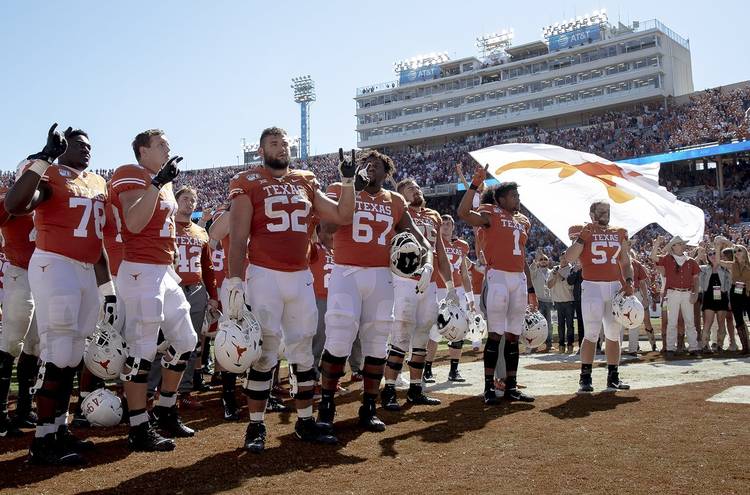 Texas players stand for the playing of "The Eyes of Texas" after losing to Oklahoma 34-27 in an NCAA college football game at the Cotton Bowl on Saturday, Oct. 12, 2019, in Dallas, Texas. [NICK WAGNER/AMERICAN-STATESMAN]

Coaches are supposed to remain even-keeled, be the waters choppy or calm. But there’s a mad scramble for life jackets after any Red River capsizing.

Texas coach Tom Herman kept his head above water during a 27-minute news conference on Monday where he indicated that “everything’s fixable” after the 34-27 loss to Oklahoma.

Missed tackles, nine sacks allowed and awful special teams aside, how did Herman feel about seeing his team get physically outmatched in the Cotton Bowl?

“It was the first time that I can remember that we got out-physicaled on both sides of the ball. And that’s not us,” said Herman, who’s now 1-3 against OU’s Lincoln Riley.

“I’m obviously disappointed in everything, in the way that the game unfolded and in the way that we played,” he added. “I’m not going to get angry at the kids. I’ll coach the coaches, and coaches will coach the kids. If there’s anybody to be angry at, it’s me. Obviously I didn’t do enough to get our guys to play at the level that they’re capable of playing.”

Herman said the missed tackles were “glaring” on film. Earlier Monday on the Big 12 conference call, he went even further and said, “We got exposed by some really good athletes. But we’ve got some good athletes ourselves that we need to teach how to tackle better.”

The Horns worked on some tackling drills during Sunday’s workout, he said. But the coach wondered aloud if scaling back the physical nature of their so-called “Toughness Tuesday” practices may have been ill-advised.

Tuesday is the only day of the week where the Horns go full throttle. “Toughness Tuesday is way harder than the game. Way harder,” former defensive tackle Chris Nelson said last season. Herman’s Tuesday practices used to be legendary, health be damned.

But with multiple injuries in the secondary this season, Herman scaled back.

“We’re so banged up defensively, it was not a great decision on my part in retrospect to limit the tackling these last few weeks in practice, and it showed,” Herman said. “We’re going to have to find a way to keep our guys healthy but also get some quality reps because we need to improve in that area.”

The injury news didn’t get any better Monday. Safety Chris Brown, who started in place of the injured Caden Sterns, will be out six weeks with a fractured forearm. Linebacker Jeffrey McCulloch will at least miss this week’s game with a dislocated shoulder.

Receiver Collin Johnson, who took a hard shot against the Sooners, did not get diagnosed with a concussion but is being monitored this week, Herman said. Sterns, cornerback Jalen Green and running back Jordan Whittington are still out with injuries and won’t play against Kansas.

It’s rare that one game can so drastically change public perception, but Texas’ defense struggled early this season at full strength. Through six games, the Horns are allowing 453.3 yards per game, a figure that would set a new school record if it holds.

Texas can still win the Big 12 championship, although UT needs to win six straight to guarantee a spot in the league title game. That’s a huge reason why Herman opened the session on a light note. “The sun came up, which is always a good thing, for everybody in this room included.”

Asked what Herman and defensive coordinator Todd Orlando need to change, Herman said, “I don’t know ‘change’ is the right word — get better, improve, develop. Those are all words that come to mind. With all the young guys playing, we’ve got to simplify moving forward, not that we haven’t been trying to these last few weeks. We have.”

Herman said the defensive staff had “four or five open-field first and second down calls on defense, couple base zone coverages and a couple blitzes” for OU. The Horns have not a sack in two weeks and have just 10 all season. By comparison, Baylor leads the Big 12 with 23 sacks. OU has 22.

“So we’ve got to let our guys play fast, we’ve got to let them play fearless, unafraid to make mistakes. That’s probably the biggest thing,” Herman said. “If that means limiting what we call, then so be it. But we gotta play fast and play aggressive.”

Roschon Johnson checks those boxes. The quarterback-turned-running back had 95 yards and almost posted back-to-back 100-yard games. Asked point-blank if Johnson should be the starter, Herman demurred.

“I don’t know. I’ll know after this week of practice,” he said.

As for Keaontay Ingram, the starter who finished with only two carries against OU, Herman said, “We’re not gonna throw the baby out with the bathwater.”

He’s not throwing out Devin Duvernay, either. The senior made a series of ill-advised decisions on kickoff returns against OU, costing Texas critical field position. “I think the magnitude of those decisions certainly have changed his mindset so to speak,” Herman said.

Herman said a nagging rib injury isn’t hampering quarterback Sam Ehlinger’s mobility or passing. He didn’t talk much about the offensive line, but Herman reiterated again that those nine sacks weren’t all the offensive line’s fault.

“All right, beat Kansas!” he said before walking out.