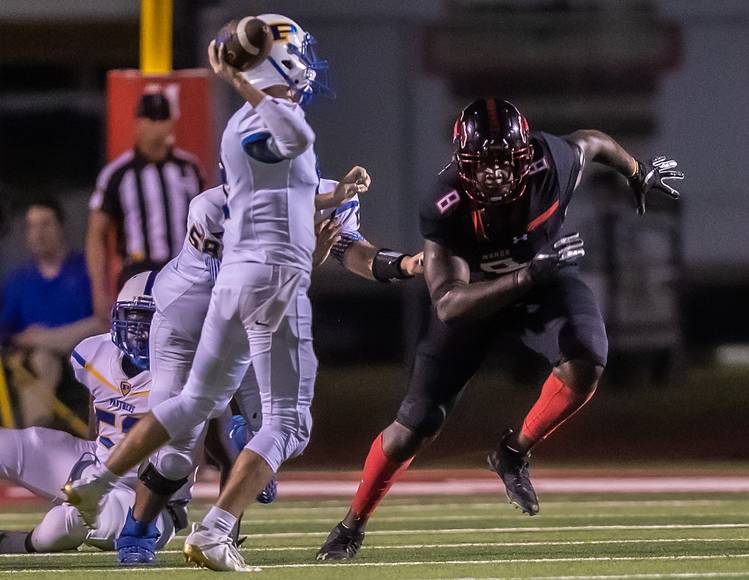 LEANDER — Texas couldn’t score a victory over Oklahoma in the Red River Showdown, but it did earn one back in August when Manor defensive end Princely Umanmielen pledged to the Longhorns over a host of suitors, including the Sooners. The four-star is ranked 22nd on the 2020 Fabulous 55, and is among the nation’s top 250 prospects, per the 247Sports composite rankings.

Umanmielen and his Manor teammates outlasted Leander Rouse on Friday at Bible Stadium. The road win moved Manor to 4-2 on the season and 2-0 in district, an improvement from the 3-3 record the Mustangs sported through six games last year. A playoff berth is likely and that’s where Umanmielen is placing his focus.

“We’ve come pretty far as a team,” Umanmielen said. “I think we can win out this season and keep improving.”

Umanmielen forced and recovered a fumble in the 20-18 victory over Rouse. He played defensive end in a three-man and four-man front, even standing up and playing some outside linebacker. His versatility is among the reasons he ranks so high as a prospect.

“It was important to steal a drive with a turnover because our offense was struggling,” Umanmielen said about his forced turnover. “I feel like I can play all over the defensive line and that’s important.”

It’s something he loves in Texas’ current defense.

“I like how Texas is flipping from three-man and a four-man front. I’m going to do whatever is needed from me in college to get on the field,” he said. “I can play outside or at B-backer if I drop some weight.”

The decisive factor for Umanmielen wasn’t scheme. It was the people at Texas.  “Texas’ coaching staff was great and everything there felt right,” he said.

Umanmielen is among an elite group of defensive linemen pledged to the Longhorns as assistant coach Oscar Giles is close to sweeping the state. The state’s three best prospects along the defensive line Umanmielen, Vernon Broughton and Alfred Collins. Texas already holds a commitment from Broughton and expects one from Collins, a big-bodied tackle from Bastrop Cedar Creek.

This doesn’t include three-star defensive end Van Fillinger from Utah and four-star Prince Dorbah of Highland Park, who expects to transition from high school defensive end to B-backer in college, much like Joseph Ossai.