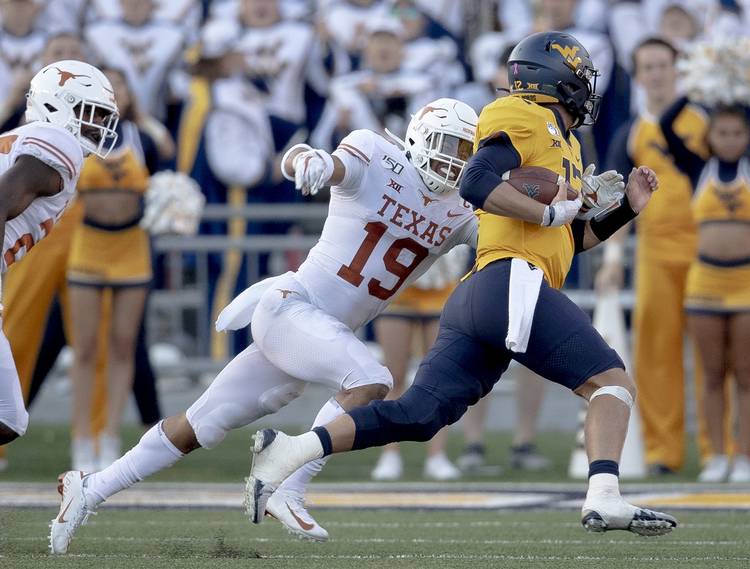 As Texas prepares for the Kansas Jayhawks, film study this week also may involve some Wildcats.

Kansas fired offensive coordinator Les Koenning on Oct. 6, turning the offense over to Brent Dearmon, who had been working as an offensive consultant for Jayhawks coach Les Miles.

Last year, Dearmon was the head coach of the Bethel University Wildcats.

That coaching change happened during Kansas’ bye week, which means the Jayhawks have had extra time to adapt to the coaching change. The same can’t be said for the Longhorns, who usually begin looking at their upcoming opponent’s game film on Tuesdays.

This season, Kansas is scoring 22.8 points per game and averaging 354.5 yards of total offense. Those numbers both rank 103rd in the country, out of 130 schools.

“You don’t know what they’re going to keep with that (offense),” UT safety Brandon Jones said. “We don’t know how much they’ve been able to install since they had that bye week, so they’ve had two weeks to prepare. Me, I’m a big tendency guy. I like to watch players in certain tendencies. We have to watch the film off of the college he was at previous to Kansas.”

In Dearmon’s one season at Bethel, the Wildcats averaged a NAIA-best 55.0 points per game. Prior to Bethel, he was the offensive coordinator for Division II Arkansas Tech from 2014-17. On Tuesday, Texas defensive lineman Keondre Coburn said the Longhorns would have to, “Just watch some film of his last games coaching wherever he’s been, and just getting preparation from that.”

Even if that place is Bethel, which is located in the small Tennessee town of McKenzie?

Here comes Tyler: With a litany of injuries in the secondary, a new name appeared on UT’s depth chart this week. Freshman Tyler Owens made the two-deep roster for the first time. Since Jones is listed as a possible starter at two positions, Owens was listed as a co-starter at one of the safety spots.

Owens was a four-star signee out of Plano East. He has played on special teams and has gotten some defensive snaps. Over six games, he has five tackles.

Don’t let the build of the 6-2, 205-pound Owens fool you. He caught the attention of many track and field fans this past spring. In May, he finished second to only Strake Jesuit wunderkind Matthew Boling in the Class 6A 100-meter dash.

Jones said that working with UT strength and conditioning coach Yancy McKnight could eventually get Owens up to 220 pounds. “That’s a pretty scary sight,” Jones said.

Current Texas quarterback Sam Ehlinger found himself in a similar situation during an injury-riddled senior year at Westlake. In fact, a broken wrist sidelined him for the final game of Westlake’s 2016 season.

On Tuesday, Ehlinger said the news about Card was unfortunate. He noted, though, that Card had an “incredible opportunity” to still lead his team. Lake Travis is currently 6-1. Last weekend, Card guided the Cavaliers to a 26-25 win over Ehlinger’s alma mater.

“You’ve got to take a second to reflect on the things that he was able to do, all the positives that he brought to Lake Travis High School, it’s tremendous,” Ehlinger said. “He’s in a long line of successful quarterbacks at Lake Travis, so it’s something for him to be proud of.”