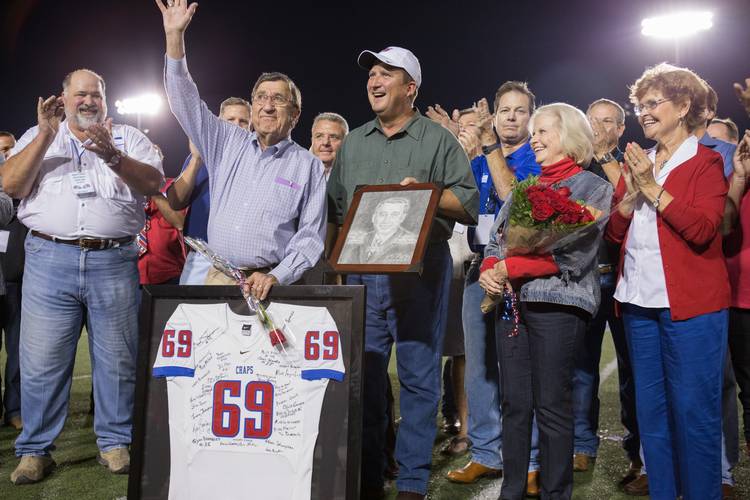 Ken Dabbs (center), the very first football coach at Westlake, was recognized Thursday night at Westlake surrounded by his family and players from his 1969 Chap team. PAUL BRICK FOR AUSTIN COMMUNITY PAPERS

Dabbs, 84, was considered the best Longhorn recruiter in school history. He worked for the legendary Darrell Royal and Fred Akers for 11 seasons during which Texas won five Southwest Conference championships and played the lead role in recruiting some of the best players to ever come to Texas.

Services will be held at Westlake Presbyterian a week from Friday.

He is survived by his wife Marguerite of 65 years; three sons, Bob, Bryan and Doug; six grandchildren, Will, Melissa, Callie, Blake, Austin and Travis; and seven great grandchildren.

“He was special to a lot of people,” Bryan said. “They don’t make ‘em like him any more.”

He was long known as one of the friendliest and kindest people who ever worked at Texas and someone who impacted countless lives in a positive way.

Dabbs was inducted into the UT Hall of Honor in 2014 for his many accomplishments. Besides Campbell, Dabbs recruited All-Americans like defensive lineman Brad Shearer to Texas. He may have been the only recruiting coordinator to land both a Heisman Trophy winner and Outland Trophy winner in the same class.

Dabbs was tasked with landing Campbell, the most sought-after running back in the state if not the country, and Royal commanded him to pull out all the stops. He became such a fixture at Ann Campbell’s dilapidated house in the country in the Swan community among the rose fields outside Tyler, he was practically sequestered in the Ramada Inn, once spending 17 consecutive nights in Room 164 at 12 bucks a night to stay within shouting distance.

Dabbs knew everyone and remembered every one of their names. He had instant recall of names and places and games, and he was a constant aid and sounding board for Longhorn head coaches from Royal to Mack Brown.

A consummate story-teller and as humble as the Texas day is long, Dabbs was a man who befriended coaches and athletes alike as well as reporters. He had an easy laugh and endeared himself to people of all stations.

After leaving Texas, he worked as a regional sales manager for SRI Sports.

Dabbs was born in Ranger, Texas, on Oct. 26, 1934. He was a 1951 graduate of Freer High School where he was a four-sport star in football, baseball, track and tennis. He earned his bachelor’s degree at Sam Houston State and his master’s at North Texas.

His coaching career, which culminated in his induction into the Texas High School Coaches Association Hall of Honor, began as an assistant at Bellville for a team that reached the 2A quarterfinals in 1957. He left for a job as assistant football and head track coach at Sweeny High School and won eight district and three regional championships there.

He got his first head football coaching position at Irving High where he coached among others quarterback Alan Lowry, who went on to become a quarterback and defensive back at Texas where he led the Longhorns to a win over Alabama in the Cotton Bowl. He once took the Tigers to a 4A quarterfinals berth with an 11-2 record.

After coaching the Chaparrals, Dabbs came to Texas in 1973 as freshman backfield coach. He was promoted to recruiting coordinator in 1975 and later became special assistant to the athletic director in 1983. He retired in 1995.