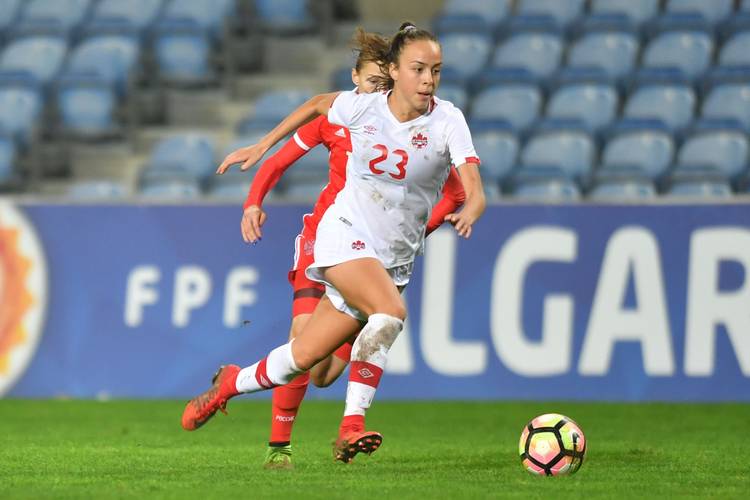 Julia Grosso turned 19 years old in August, barely two months after she returned from her first World Cup. She’s been a member of the Canada senior national team for the better part of two years.

Yet inside Grosso there’s still the 8-year-old who asked Canadian forward Christine Sinclair for an autograph, somewhat disbelieving that they’re now teammates.

Earlier this month the sophomore midfielder for Texas, flew to Japan for a friendly match against the 2020 Olympics hosts. She missed two matches for the Longhorns, something that has become a regular occurrence during her first two seasons on the 40 Acres.

In 2018, she earned co-Big 12 freshman of the year honors despite missing eight regular-season matches to play for Canada.

Texas coach and former Canada international Angela Kelley understands. It’s one of the reasons Grosso chose to play for the Longhorns.

That doesn’t make traveling halfway around the world during the middle of Big 12 play any easier.

Grosso left on Sept. 30, the day after she played 90 minutes in a 1-0 win over Kansas State in Manhattan, Kan. She flew from Austin to Houston, hopped on a 14-hour flight to Tokyo, then a four-hour drive to Shizuoka.

Once there, she participated in four days of training, watched as Japan beat Canada 4-0 in the friendly match on Sunday, then played all 90 minutes as a holding midfielder in a 0-0 scrimmage the following day.

Four days, a 12-hour flight and another wave of jet lag later, Grosso started and played all 90 minutes for Texas in a 2-0 loss to Oklahoma State.

“I felt like I was kind of starting to adjust to Japan, and then I came back and was all over the place,” Grosso said. “They say every hour of time difference takes a day to adjust. I clearly needed like 14 days.”

Kelly praised Grosso’s effort to get back on the field against the Cowgirls.

“She’s just a world class player,” Kelly said. “She can respond like that. I remember in my career, I did something similar. It was actually Japan as well. She’s young, she’s youthful, and we’ll just make sure we take care of her.”

The Longhorns miss Grosso when she’s gone, but her international experience has shown itself this season. She leads the team in scoring with seven goals and has tried to bring some of the maturity gained from playing with older Canada teammates. Her ultimate goal is to become a regular starter for the national team, sooner rather than later.

That means taking advantage of opportunities when they come.

“It’s hard sometimes going back and forth,” she said. “Sometimes I feel like I’m getting into the flow with my Texas team and then you have to leave. But I know the national team is what I want to do when I’m older, and I want to continue on by going to the next World Cup and the Olympics.”

Texas’ notable number: The Longhorns’ lack of sacks — and the number 3

The Eyes of Texas: Four players to watch in Saturday’s Longhorns-Jayhawks game