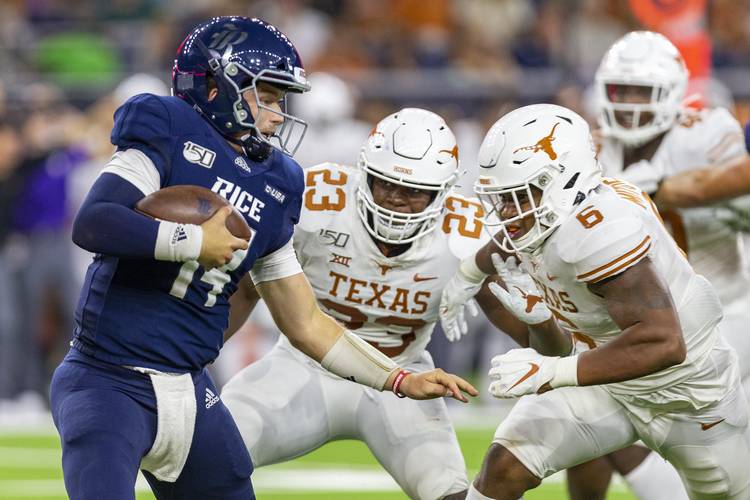 This week’s notable number is 3 — the jersey number that is currently assigned to injured cornerback Jalen Green. Texas senior Devin Duvernay, with 53 receptions through six games, is on a pace to record the school’s third 100-catch season. The only Longhorn with three 80-yard plays to his credit is Herkie Walls, who played from 1979-82.

Three also represents the amount of times this millennium that Texas has gone consecutive games without a sack.

In its last two games — a 42-31 win over West Virginia and a 34-27 loss to Oklahoma — Texas was unable to take down the opposing quarterback. The Longhorns last went back-to-back games without a sack during the second and third games of the 2013 season. Following a sack-less Holiday Bowl in 2003, Texas didn’t record a sack in the 2004 season until the third game.

Texas recorded its last sack when Joseph Ossai took down Oklahoma State’s Spencer Sanders in the third quarter of the 36-30 win on Sept. 21. Over the past two weeks, Texas has seen 74 pass attempts from West Virginia’s Austin Kendall and Oklahoma’s Jalen Hurts. Those two quarterbacks ran it 22 times.

UT coaches will tell you that they aren’t too worried about the lack of sacks. Earlier this month, head coach Tom Herman stated “the number of sacks is not necessarily indicative of the effect that a front can have on a quarterback.” Noted defensive coordinator Todd Orlando this week: “If we don’t get there but we cause a bad throw, I’m good with that too.”

Texas wants its opposing quarterbacks to be pressured, much like Hurts was when he was intercepted in the end zone last weekend. Defensive linemen T’Vondre Sweat and Marqez Bimage were credited with pass breakups against West Virginia. However, Kendall was not under duress when he threw his four interceptions in that same game.

“I don’t know that the concern level is DEFCON 5 just yet,” Herman said Monday.

Texas often plays with a three-man front, which conceivably gives the Longhorns one less defensive lineman to send at quarterbacks. Still, Charles Omenihu recorded 9.5 sacks off the line last year. As a team, Texas has only 10 sacks this fall.

“We’re trying to get more sacks,”  defensive tackle Keondre Coburn said. “There’s just a different style of play in this conference. I don’t want to say it’s hard for D-linemen to get sacks, but it’s just way different than teams going against us.”

Texas, which did sack Heisman Trophy contender Joe Burrow four times,  ranks 92nd nationally in sacks. Depending on whether UT plays 13 or 14 times this season, the Longhorns are on pace for around 22 or 23 sacks. The last time Texas had fewer than 30 in a season was 2011.

The next team on UT’s schedule is Kansas. The Jayhawks have allowed 11 sacks this year.