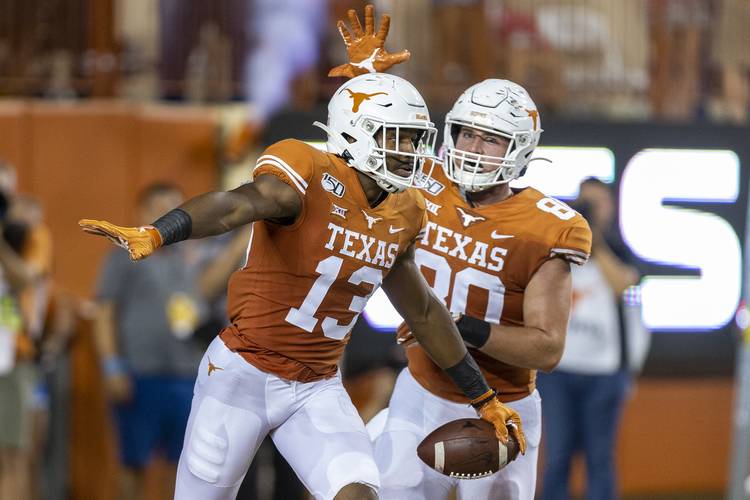 Five key matchups in the Texas-Kansas game to keep your eye on Saturday night:

In five games this season, Williams has averaged 4.9 yards per rush and 4.5 yards per catch. A 1,000-yard rusher as a freshman, Williams has only scored twice this fall and his longest run is a 36-yard jaunt.  But Texas knows about how explosive Williams can be —  Williams broke loose for a 57-yard touchdown against the Longhorns last season. Texas also had a home run threat in Eagles, who is also a sophomore. Eagles has caught 13 footballs this season, but two of those catches went for 55- and 73-yard touchdowns. Those are two of UT’s three longest plays this season.

Both Torneden and Ehlinger both grew up in their college towns and have since been captains of their hometown teams. Torneden’s 30 starts rank third among the active Jayhawks (behind offensive lineman Hakeem Adeniji’s 42 and fellow safety Mike Lee’s 32 starts). Torneden leads Kansas with his 43 tackles and he has also forced a fumble. Saturday’s start will be Ehlinger’s 27th as a Longhorn. This year, Ehlinger has thrown for 1,658 yards and 17 touchdowns. He is currently on a pace that would challenge Colt McCoy’s single-season school records of 3,859 yards and 34 touchdowns.

Nine is a number worth noting in this match-up. The nine sacks allowed against Oklahoma last week tied a school record at Texas. The Jayhawks have also recorded nine sacks over their last three games against the Longhorns. When asked about the Kansas defense this week, Shackelford observed that “The one thing about Kansas teams since I’ve been here is they always have really good defensive lines.” Shackelford, a 6-4, 305-pound fourth-year starter, will line up against the 6-2, 290-pound Brown on Saturday. In addition to 2.5 tackles for a loss, Brown is responsible for 1/2 of KU’s 12 sacks.

Kansas right guard Chris Hughes, who is the younger brother of ex-Longhorns Camrhon and Naashon, is one of five KU linemen who has started at least five times this fall. That group has combined to allow 11 sacks this year, which is a total that has been bested by 52 FBS-level teams. Texas, meanwhile, ranks 92nd nationally in sacks and the Longhorns failed to take down a quarterback in either of their past two games. Of Texas’ 10 sacks, only two have been credited to a player on the defensive line. UT will also be without defensive end Malcolm Roach for the first half because of last week’s targeting penalty.

This weekend, Kansas will have a new voice calling the shots on offense. During its bye week, Kansas replaced offensive coordinator Les Koenning with Dearmon, who had been working as a team consultant. NAIA school Bethel University averaged 55.0 points per game in 2018 with Dearmon as his head coach, but he has never coached at the FBS level. Dearmon inherited an offense that was scoring 22.8 points under Koenning, who coached Texas’ receivers in 2014. While this will be Dearmon’s KU debut, this will be Beck’s 34th game with the Longhorns. Texas is averaging 39.3 points and 454.7 yards per game in 2019.

The Eyes of Texas: Four players to watch in Saturday’s Longhorns-Jayhawks game