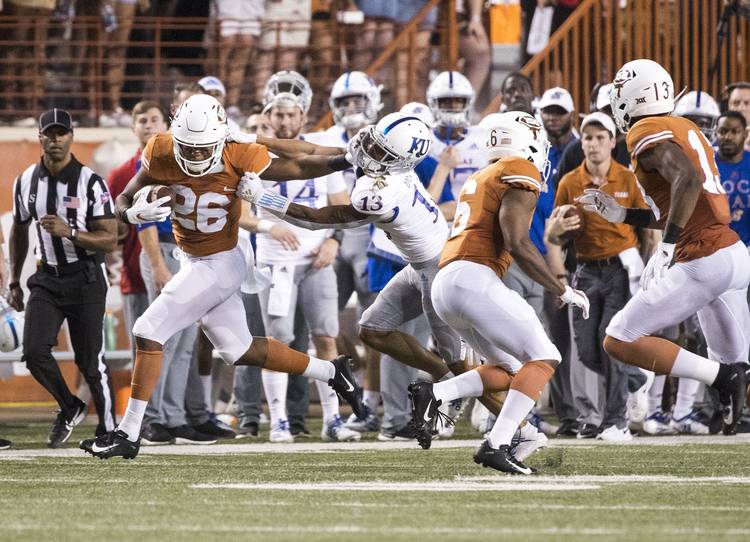 Texas Longhorns running back Keaontay Ingram (26) fights for yardage against Kansas Jayhawks cornerback Hasan Defense (13) in the second quarter during an NCAA football game on Saturday, Oct. 19, 2019, in Austin, Texas. [RICARDO B. BRAZZIELL/AMERICAN-STATESMAN]

Revisiting our five pregame questions that were facing the Longhorns ahead of Texas’ 50-48 win over Kansas on Saturday.

1. Did Devin Duvernay stay hot from the first half of his season?

Duvernay, who led the country with 53 catches heading into the game, led the team with eight catches for 110 yards and a pair of touchdowns in the frenetic fourth quarter. So he now has 61 catches for the season; Oregon State’s Isaiah Hodgins, whose 51 catches had him just behind Duvernay, had five on Saturday against Cal. Duvernay is ahead of the pace of Jordan Shipley’s school-record 116 catches from 2009.

2. Did a fresh face step into the spotlight for Texas?

The young safety earned his first career start and led the way defensively for the Longhorns, finishing with five tackles, a sack, two tackles for loss and a pass breakup.

3. Did Texas avoid any miscues in the return game?

How long did it take for the first head-scratcher? Try the opening kickoff, when D’Shawn Jamison caught the kick near the 1-yard line — as it was heading out of bounds. Fortunately for Texas, it was ruled out and the Longhorns got the ball at the 35. On the second Kansas kickoff, Jamison chose to field it right at the goal line and run it out. He made it to the 13. Luckily for Jamison, Malcolm Roach’s blocked extra point gifted him a 98-yard return for two points, which ended up being the play of the game. The Longhorns have had their issues this season on kick and punt returns.

And the Longhorns nearly had two.

Keaontay Ingram finished with 101 yards on 14 carries, his second 100-yard game of the season. And Sam Ehlinger had 91 yards. Ingram’s 32-yarder was the second longest run of the season so far for Texas. There has been debate over whether Roschon Johnson, the freshman quarterback-turned-running back who was the team’s leading rusher heading into Saturday, should be starting over Ingram. On Saturday night, though, it was Ingram who carried the load.

5. How did Texas look in the first quarter, post-OU?

The Longhorns hardly looked like they were suffering from an OU hangover, scoring touchdowns on their first two drives. But things went downhill after that, as the offense slumbered through the second quarter and into the third. But the Longhorns woke up after Roach’s block and Jamison’s big return, and Ehlinger drove them in the final 1:11 to give Cameron Dicker his last-second game-winner. Since Tom Herman has taken over, Texas is now 10-2 following a loss.