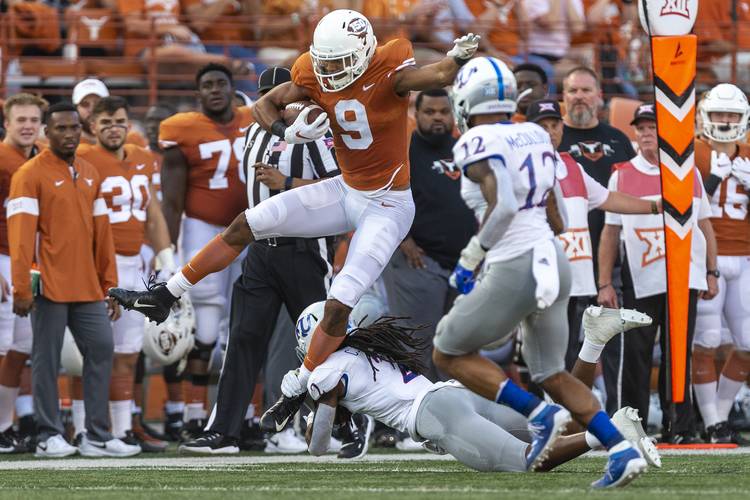 Johnson exited the 34-27 loss with a head injury; Roach had been ejected for targeting. Both returned to the field Saturday against Kansas and made impact plays in the Longhorns’ 50-48 win.

Johnson finished with eight catches, but his final three went for 16, 20 and 11 yards on Texas’ final drive that helped set up Cameron Dicker’s game-winning field goal. Roach, who was suspended for the first half because of last week’s ejection, blocked a Kansas extra-point kick that would have tied the game with 10 minutes left in the game; D’Shawn Jamison scooped up the ball and returned it 98 yards for two points.

Johnson’s eight catches were a season high for him, though he missed three games with a hamstring injury. He admitted that his injuries had been a source of frustration. He had one noticeable drop on Saturday but thought he made a positive stride against the Jayhawks.

“I finally feel like I can finally get in my groove a little bit again,” Johnson said. “It’s definitely been frustrating with all the injuries. But it’s football, it’s going to happen. You’ve got to adjust and move forward.”

Roach watched the first half on TV in the Texas locker room. He even had a homework assignment out of the game to turn in at halftime to defensive coordinator Todd Orlando.

“I was ready to get back out there the whole time,” Roach said. “I knew the situation that I was in, so I couldn’t get over-hyped. I just tried to stay calm the whole time.”

In the fourth quarter, Roach got penetration and his block turned a potential 31-31 tie into a 33-30 lead for Texas. Roach credited teammate Ta’Quon Graham for clearing the way for him. Additionally, he praised his fellow defensive linemen for the push they got on Joseph Ossai’s block of Liam Jones’ 37-yard field goal at the end of the first half.

Now introducing…: Senior Mason Ramirez played several snaps on UT’s last defensive appearance, an eight-play drive that resulted in a Kansas touchdown and 48-47 lead. Ramirez is a Round Rock product who originally walked on at Kansas. He walked on to the UT team in the spring of 2018. He was placed on scholarship this summer.

Ramirez was originally listed as a defensive back on the Texas roster. He moved to running back during fall camp as Texas dealt with a spat of injuries in its backfield. With a dinged-up secondary now the bigger cause for concern, Texas coach Tom Herman said Ramirez switched positions again within the past few weeks. He had played in five games, but that playing time had primarily been logged on special teams.

“He was in the meetings and got some reps in practice, but not a whole lot (of preparation with the defense),” Herman said.

Ramirez was not the only defensive fresh face. Freshman defensive lineman Moro Ojomo and sophomore safety DeMarvion Overshown made their first career starts. Freshman linebacker David Gbenda, who was also moved to running back at one point this season, also started for the first time. Redshirt freshman Byron Vaughns had eight stops, which trailed only Brandon Jones’ 10 tackles.

Pooka problems: In defeat, Kansas sophomore Pooka Williams Jr. rushed for 190 yards and two touchdowns. Last year, he ran for 103 yards against the Longhorns in Lawrence.

In 34 games under Texas defensive coordinator Todd Orlando, Texas has allowed nine 100-yard rushers. Five of those have been recorded over the last four games. Williams’ 190 were the most against Texas since Herman and Orlando arrived in 2017, passing Maryland’s Ty Johnson’s 132-yard game in the 2017 season opener.

Texectera: With eight catches, UT senior Devin Duvernay moved into 10th place for career catches chart (131). Johnson is eighth with 171. … Sam Ehlinger became the first UT quarterback to throw for four touchdowns in four different games in the same season. … A third-quarter sack by Overshown was UT’s first since the Oklahoma State game on Sept. 21. … Three cast members of the 1993 cult classic “The Sandlot” — Patrick Renna, Tom Guiry and Chauncey Leopardi — were in attendance. Recognized during the game, that trio also teamed with Bevo to recreate a scene from the movie.

"It is the law of the sandlot. Anything that goes over that fence…becomes property of the Beast!"#HookEm | #Sandlot pic.twitter.com/0ikrizOjkt