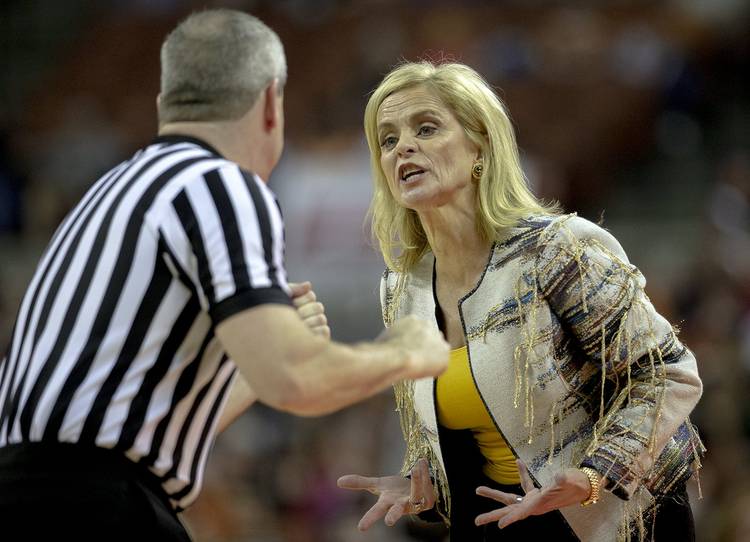 KANSAS CITY, Mo. — Winning her third national championship was nice, but Kim Mulkey felt even better the next day when she got an injury update about Lauren Cox.

“I was in the bathtub and my phone rang,” Mulkey said Tuesday. The team trainer was on the other end. “I just thought, well, I guess either way I’m going to be relaxed because I don’t think it’s going to be good news but I’m in a hot tub of water.”

Cox’s injury against Notre Dame in the national championship game was the most heartbreaking moment of Baylor’s season. Mulkey was holding back serious tears talking about it during a TV timeout.

Turns out, Cox, the team’s defensive heart and soul, merely had a bone bruise and sprained knee ligament. No surgery was required.

Calgon, take Mulkey away. “It was the best bath I’ve had in years,” she said.

Bet against the nine-time Big 12 champion Lady Bears at your own risk. Or, as West Virginia coach Mike Carey said, “I’m not really happy to hear that Baylor has everybody back.”

Cox, a senior from Flower Mound, is back this season, and Mulkey swears she looks every bit the same player as before. Thus, Cox is already on the short list of candidates for national player of the year.

“Anyone that was watching the game just immediately thought the worst, and that’s what I thought as well,” Cox said. “Just the pain I was in and seeing the replay, I thought my ACL was torn.”

“The game was actually playing back there and they were trying to not let me see it,” Cox said. “I ended up seeing it, and I knew I had to get back out there. I knew my team was worried about me, and I just needed to show them I was OK. I needed to get back in that huddle. I’m one of the leaders of this team. I needed to have my voice be known.”

Cox’s message resonated throughout Municipal Auditorium on Tuesday during Big 12 women’s basketball media day. Cox and guards Juicy Landrum and Moon Ursin all described how there’s no backing down from the high expectations in Waco.

Mulkey said she doesn’t really keep close tabs on what other Big 12 teams are doing. That’s what assistant coaches are for. Does anyone in this league scare her? “I’m scared every time I tip off. I’m worried about Langston on Friday night,” she said.

One preseason exhibition game probably won’t cause much alarm, regardless of the outcome. But that’s where Mulkey is at mentally, even after three national titles and a string of dominant victories.

Moving back to KC: The Big 12 women’s tournament is moving back to Kansas City this season and will again be paired with the men’s event.

Kansas State coach Jeff Mittie and Iowa State’s Bill Fennelly talked up their excitement about having the event come north again. The women’s tournament has been in Kansas City, Dallas and Oklahoma City over the years.

Mittie said it’s imperative the league put “butts in the seats” come tournament time. The tournament’s dates on March 12-15 are a bonus for the Big 12, too. During those dates, the Big 12 will be the only Power Fiveleague still playing women’s games, meaning its the only option for NCAA Tournament selection committee members.

“That hire for me did go to my core, but it’s about the human being,” Coale said. “She is a small-town, self-made, unbelievable talent who just did the right thing and treated people well and graciously and humbly accepted things as she ticked off all the accolades, led her team, ducked her head and worked her way to a Final Four. That, I love and was drawn to.”

New strength training: Oklahoma State’s Vivian Gray, a member of the preseason All-Big 12 team, unveiled a special training technique she had growing up on a farm in Argyle. She used to wrestle goats.

“I think that kind of made me tougher because they hit you with their horns and it hurts,” Gray said.

Gray was the Big 12’s newcomer of the year last season for an Oklahoma State team that went 14-16. The league is lacking its normal wealth of star forwards this season. Gray averaged 20 points per game in league play.

The Dotted Line: Examining the status of the Big 12 recruiting scene