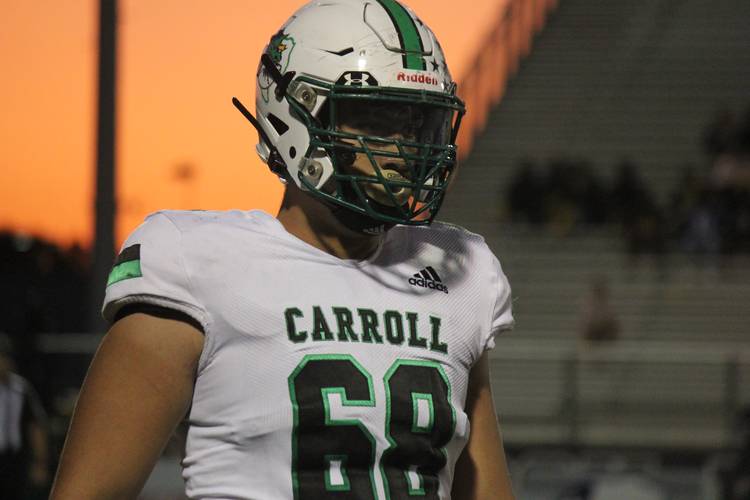 SOUTHLAKE — It’s not easy for a 6-5, 270-pound teenager to go unnoticed. Yet that’s the case with Southlake Carroll offensive tackle Andrej Karic. The three-star is rarely discussed when Texas fans brag about the talent in the 2020 cycle. Yet, the UT commit headlines one of the best offenses in the state and will play at the All-American Game in San Antonio in January.

“I’ve watched it (the All-American Game) growing up and it’ll give me a good test before college,” Karic said. “I’m 100% committed, but there are colleges still hitting me up.”

Karic arrived on the recruiting scene late. He didn’t receive an offer from Texas until this June, nearly two years after his fellow UT commit Logan Parr, for example. Karic was a first-team all-district selection as a junior, but he entered the offseason weighing less than 250 pounds. Colleges stayed away until he proved he could add weight. He’s now up to 270 pounds.

“He’s a great athlete at offensive line,” said Carroll head coach Riley Dodge. “He’s a leader for us and a player who has become great as an upperclassman. He’s ready for the big time.”

Karic chose Texas in July over 20 other offers. He’s one of four offensive linemen pledged to UT, joining Parr, Jake Majors and Jaylen Garth. Majors and Parr are considered interior prospects likely to play guard or center. Karic, like Garth, is likely a tackle at Texas. Karic took his official visit for the win over Oklahoma State on Sept. 21.

“It was like a little vacation. I knew I was going there, so I just enjoyed the time,” he said. “It’s been amazing getting to know the rest of the recruits in my class. We want to already have a good relationship by the time we get on campus.”

Karic also was at the Cotton Bowl for the Red River Showdown.

“The Texas-OU game was amazing,” he said. “It was crazy seeing half the crowd be in orange and the other in red. I can’t wait to play in that game. I didn’t like being in the stands that much.”

Karic is on a state championship contender at Southlake Carroll. The Dragons are 7-0 after beating Keller Fossil Ridge 62-7 last Friday. Karic was impressive during the game. He’s a strong, dominant force who possesses rare athleticism for a teenage offensive lineman. Carroll also holds a regular season victory over Denton Guyer. That win set the tone for the Dragons, Karic said.

“We had a great week of preparation during the Guyer week, and we wanted to keep that same energy with every opponent,” he said. “Our young guys are growing up and we have a team chemistry. We have a bond and we’re hoping to reach our goals.”

Sophomore quarterback Quinn Ewers is one of those young guys growing up on the varsity field. The 6-3, 195-pound prospect is the only in-state quarterback in the 2022 class to hold an offer from the Longhorns. He’s clearly the main target for offensive coordinator Tim Beck in the 2022 cycle. Ewers was at the Red River Showdown, though he didn’t want to discuss recruiting last week.

“It’s all about this team and helping my teammates reach the playoffs and then go chase a state championship,” Ewers said. “I have so much time to worry about recruiting. I talk to the coaching staff and and do some visits, but it’s too early to start worrying about favorites and where I might go.”

Despite rough times, Texas’ Tom Herman not lowering the bar or his aspirations for 2019