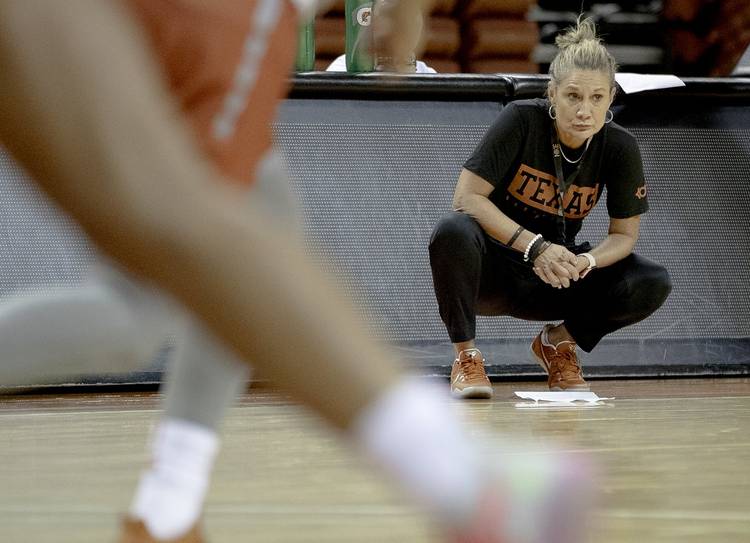 All the dysfunction and frustration from last season’s 23-10 campaign is now a distant memory.

Maybe Texas should’ve done better than finish third in the Big 12. Maybe Aston’s club should’ve beaten Indiana in the first round of the NCAA Women’s Tournament. At this point, ah, who cares?

Well, Aston does, actually. The Texas coach, now entering her eighth season, spent Tuesday reflecting on her own personal summer of introspection. No, she was not happy with how the season ended. And she’s energetic as hell to make sure it doesn’t happen again.

“I took a step back. You have to sometimes get away from the emotion of something and really evaluate where we were,” Aston said. “You have to take ownership to begin with as the coach.”

“You have to say, OK, what is the reason for this and what could I have done before you start lashing out at the players,” she continued. “That was the first step. Look at myself, in particular and say, OK, what did I miss this year? Did I miss anything or was it not just a good year? What could I do to help this team get better?”

Heaven help any Horn who doesn’t want to adhere to Aston’s wishes at this point.

“There’s been several times in practice where I’ve stopped them and said, ‘This is not what this is going to look like,’” said Aston, who is 165-72 at UT. “They’ve immediately responded, and that’s what I’m encouraged by.”

Joyner Holmes, entering her senior season, admitted how this was her first full offseason since her freshman year. She missed the fall semester of her sophomore campaign for what was termed a “university suspension.” Then she needed ankle surgery one year ago this month, delaying the start of her junior season.

Texas has only 11 able bodies. A 12th player, 6-foot transfer Karisma Ortiz, is on the roster but will sit out this season. With fingers crossed, UT officials petitioned the NCAA for a transfer waiver, but nothing has been decided yet.

Holmes and Charli Collier make up the frontcourt. They’re not altering the rules; Texas gets only 10 fouls between them. “Yeah, we’re working on that,” Holmes said with a giggle.

Without any prompting, Holmes acknowledged that some wonder if she’ll ever return to her freshman form. The 6-3 forward averaged 12.1 points per game during the 2016-17 season, a total that’s still her career high.

Holmes said every player had to come up with a word that best describes them. “My word was resilience,” she said.

“I think that’s my mindset going into this year,” Holmes said. “I’m not going to give up. I’m not going to allow anybody to run through me. I am Joyner Holmes, and I’m going to be that this year. I have to give my team everything I have this year. It’s my last go-round, my last showcase.”

Same holds true for senior guard Sug Sutton. By this point, the 5-8 sensation has practically seen it all. Now it’s her time to step up and lead, same as Ariel Atkins did two years ago when Texas reached the Sweet 16. Atkins just got done helping the Washington Mystics win a WNBA championship.

“People lean toward people who have more experience,” Sutton said. “You think they’re supposed to know what to say in big moments. We do as experienced players, but it always helps when everyone else on the team helps as well. It makes us all come together collectively.”

Speaking of leaning on others, Sutton has yielded the practice floor to 5-8 sophomore Joanne Allen-Taylor while resting a stress fracture in her left foot. Aston does not expect Sutton to be ready for the start of the season, but don’t scratch her out for the entire month of November, either.

“I’ll be hopefully ready by the time we start the season,” Sutton said. “But just taking it one day at a time right now.”

That’s been Lashann Higgs’ mantra, too. The fifth-year senior has worked herself back into the lineup after missing almost all last season with a torn knee ligament. Aston is also banking on senior Jada Underwood to be a strong locker room presence. She’s got 91 games on her résumé.

When your team has only 11 players, it’s probably good to have four veterans. Then add in Celeste Taylor, a McDonald’s All-American and preseason Big 12 freshman of the year.

Looking at Texas as a whole, Aston is excited. There was a serious gravity in her voice Tuesday during a Big 12 panel discussion when she said, “I’m just expecting us to be more competitive.”

Off stage minutes later, she said, “I don’t mean that in any kind of negative connotation. Just own your senior year. This is it. So own it. Lead our team and try to be the best example you can be every single day, and try to get the most out of yourself every single day.”

Holmes said the Horns want everyone to “get on the boat.” It’s all patched up from last season. So get on board, start rowing. Destination Waco, because apparently that’s where they keep all the Big 12 trophies.

“All credit to Baylor for last year,” Holmes said. “But it’s a new year, and it’s anybody’s time. My mindset this year, I’m not going to give into anything.”