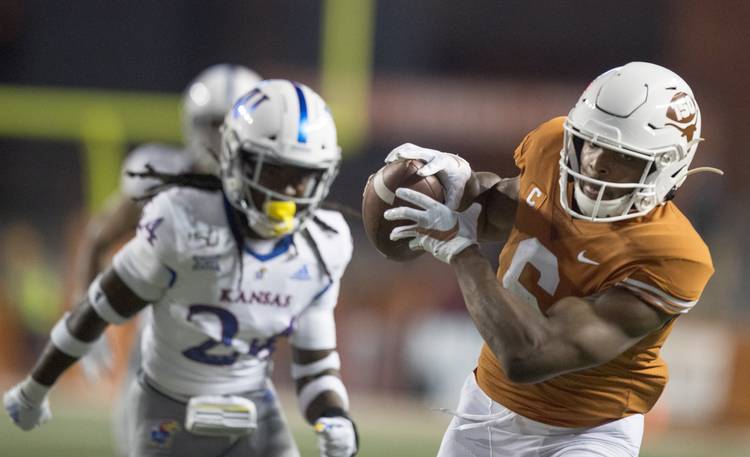 Texas receiver Devin Duvernay (6) converts a first down against Kansas safety Ricky Thomas (24) on Oct. 19, 2019 in Austin. [RICARDO B. BRAZZIELL/AMERICAN-STATESMAN]

So, what was Sam Ehlinger thinking when Kansas took that 48-47 lead over Texas with 1:11 left in the game?

“Good. Another opportunity for us to go out and control what we can control,” the Texas quarterback said Tuesday. “I would love to have the ball last.”

He went on to lead the Longhorns on a 10-play, 60-yard drive that ended with Cameron Dicker’s 33-yard field goal as time expired. As Texas drove, both the clock and the Longhorns’ margin of error dwindled. But on one play specifically, the Longhorns could not afford a slip-up.

Texas called its final timeout with 8 seconds left, after an 11-yard pass to Colllin Johnson reached Kansas’ 21-yard line. Dicker could have attempted the game winner right there from 38 or 39 yards out. But the offense stayed on the field.

On first-and-10 with 8 seconds left, Ehlinger fired a short 6-yard completion to Devin Duvernay on the left side. He quickly scooted out of bounds at the 15. The play took only three seconds off the clock.

Had Duvernay been tackled in bounds, time would have expired and the game would have been over. Had Ehlinger bobbled the snap or taken a sack, Dicker may have been stranded on the sideline. A Longhorns penalty could have led to a game-ending runoff of the clock.

On Tuesday, both Ehlinger and Duvernay said the Longhorns were very aware of the clock on that final play. The team works on those kind of end-of-game circumstances in practices every week.

“That’s a situation we practice for,” Ehlinger said. “We understand the consequences of every little minute detail of the worst situations. I was very aware of the situation. The situation, obviously there’s things that can go wrong, but we were very prepared to not make those mistakes.”

Numbers game: Because of Ehlinger, the No. 11 has become a favored number among Texas fans over the past three years. Ehlinger, though, doesn’t have a good story as to how he ended up wearing it. He wore No. 4 in high school.

He wore 4 at Westlake becaue he reminded Chaparrals coach Todd Dodge of Chase Daniel, who was his star quarterback at Southlake Carroll. When Ehlinger arrived at Texas in the spring of 2017, that number was already taken by Lil’Jordan Humphrey (Humphrey later changed his number to 84). Ehlinger was given a few options and settled on 11. “I liked the number and was like, all right, I’ll roll with it.”

Ehlinger knows there’s a Longhorns history with that number. Former quarterback Major Applewhite, who’s the second-leading passer in school history, wore it from 1998 to 2001. Ricky Williams had the number for his first two years on campus. And All-American linebacker Derrick Johnson perhaps wore it most famously.

Roach told reporters that co-defensive coordinator Craig Naivar often tells the Longhorns to take those plays seriously and to “make teams pay for points.” Thursday practices feature drills that simulate blocked kicks. “That’s something we take pride in,” Ossai said. “Making them pay for points is kind of our mantra. Even if they score unfortunately and they end up kicking the extra point, we’re going to make them pay for that extra point.”

Texas scored off of Roach’s block as sophomore D’Shawn Jamison took the ball the other way for two points. In that 37-14 win over USC, Anthony Wheeler scooped up the ball that was blocked by Sterns and returned it for a touchdown. In Tom Herman’s first game at Texas, the Longhorns scored off a Maryland field goal attempt that Ford blocked.