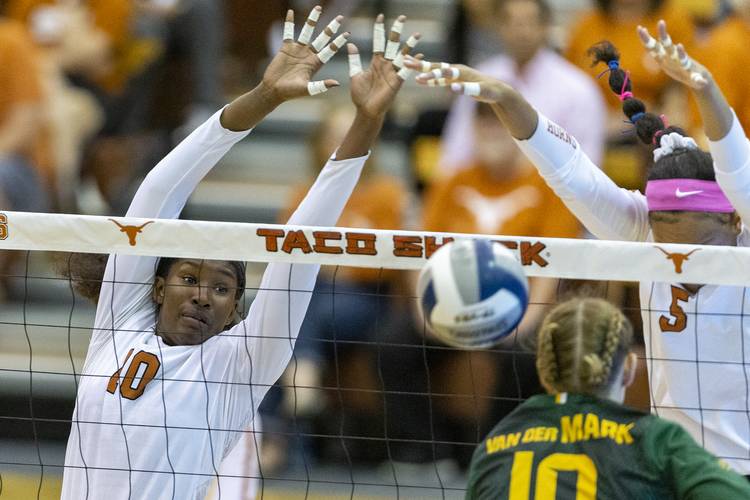 So what happens when you play volleyball at Texas and you beat the No. 1 team in the nation?

Does that count as an upset? Or is it impossible to be an underdog when you’ve won 10 of the Big 12’s last dozen championships?

After Texas swept Baylor on Wednesday night, senior outside hitter Micaya White had an answer.

“I think we always just try to come out and be the hunter, not the hunted,” White said. “So no matter if were ranked low or ranked higher, we’re going to come after you no matter what.”

Over the past 15 seasons, Texas has hosted a dozen Big 12 matches that featured a top-10 foe.

Hitting .333, Texas took control of the first set at the halfway point and pulled away to an early triumph. The first-set loss snapped a 31-set winning streak for Baylor, which had swept its last 10 matches. In fact, Baylor had only dropped two sets the entire season. That number, though, would be doubled by the end of Wednesday’s second set.

Nationally, Baylor’s .310 hitting percentage had ranked just behind Texas (.328) and Missouri (.311). The Bears, though, hit only .084 in Austin. Senior Yossiana Pressley finished with 18 kills on 41 swings, but Baylor could not establish another offensive threat. It took until Baylor’s sixth point of the second set for a Bear not named Pressley to record their second kill, and setter Hannah Lockin’s four kills ended up being the team’s second-best total.

‘”Erik (Sullivan, UT’s associate head coach) works really hard on the scouting report and just making sure we know their tendencies,” Butler said. “I think we did a really good job.”

The win was the eighth in a row for Texas. Since a five-set loss at Rice on Sept. 18, Texas has swept seven of its opponents. Iowa State is the only conference foe that has taken a set off the Longhorns.

“I think little by little, every day is getting better,” White said. “That’s what you want, you don’t want this drastic increase and then maybe drop toward the end of the season. Just gradually getting better and better every day, just one percent.  And so hopefully by tournament time, we’re 100.”

Notes: Texas will travel to Kansas on Saturday. … On her 20th birthday, redshirt freshman Asjia O’Neal celebrated with five kills, three blocks and a .500 hitting percentage. … With an announced crowd of 4,215, Texas celebrated its fifth sell-out in eight home matches.