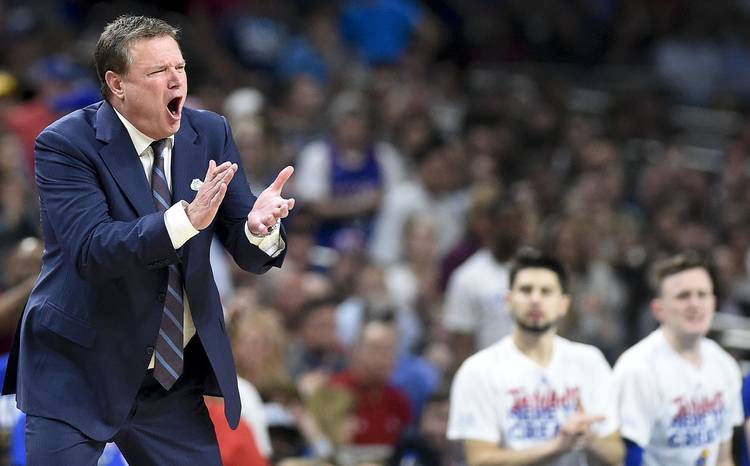 Kansas head coach Bill Self encourages his team from the bench in the second half against Villanova during an NCAA Tournament national semifinal on Saturday, March 31, 2018, at the Alamodome in San Antonio, Texas. (Allison Long/Kansas City Star/TNS)

FBI investigations, Snoop Dogg, stripper poles and money guns have already been addressed, or so Self would like to think.

“I’m probably more excited about getting to basketball this year than I have been in most years,” Self said at Big 12 media day. And yes, for those interested, the Jayhawks are picked to win the Big 12 this season.

The first question from the media involved the brewing NCAA investigation and Self’s alleged involvement with T.J. Gassnola, the former Adidas consultant who pleaded guilty in the college basketball recruiting scandal.

“The message, if you read the statement, which you obviously did, was one in which I made the statement, then I also said that we cannot comment to any details of anything going on with the allegations due to the NCAA process,” Self said. “I’m going to follow that. I’m going to stick to that.

“Certainly the things you just asked will be things that will be answered at the appropriate time, whenever it can be answered,” he continued. “Certainly this is not the time for that.”

Guard Devon Dotson’s foot injury and big man Udoka Azubuike’s return didn’t seem as important in the moment. For his part, Self seemed to lean into questions about the controversy surrounding Kansas basketball.

“I think we’ve probably given some rabid fan bases some ammunition to help in some areas to fire them up,” Self said with a slight grin.

FBI and NCAA investigators have questions. Snoop Dogg’s wild appearance at Late Night in the Phog, one that featured “acrobatic dancers” on poles and Snoop shooting fake money with an air cannon onto the players’ heads, created questions for the marketing department.

Monday’s news that Kansas has restarted the dormant Border War with rival Missouri should’ve been cause for celebration. But even that question prompted Self to say he hasn’t gotten much immediate feedback.

“Believe it or not, I haven’t been a big reader of newspapers of late,” Self said.

Even if Self is found to have violated NCAA rules by working with Adidas to get players, one gets the sense around Kansas it’s no big deal. Self said “our chancellor and our athletic director, the basketball program, are totally aligned on this.”

“I just know the things that have taken place thus far, obviously nobody likes to deal with it,” Self said. “Certainly I haven’t liked it, but it’s also in a strange way motivating me probably in a way that maybe I never have been to combat this by taking care of our business on the basketball court, working with our players in a way that maybe exceeds any way I’ve ever done it.”

“I’m a breakfast burrito guy in the mornings,” Beard said. “Where I go, you have to ask for the salsa. They charge you for it, which is a little bit ridiculous. The lady would charge me 30 cents, 33 cents with tax. Some mornings I wouldn’t have cash, which is a common thing, take my credit card out, run it for 33 cents for salsa.”

Nobody tell this restaurant owner that Tech has 10 newcomers due to a total roster overhaul.

“We play for the national championship,” Beard said, “and now I’m pleased to say I now get free salsa.”

Later in the day, Beard turned far more serious when asked about former Tech star Andre Emmett, who was shot and killed on Sept. 23.

Former Tech chancellor Kent Hance called Beard about boosting the money offered by Crime Stoppers in Dallas. “Before he could get it out of his mouth, I said, ‘Absolutely, count me in. Whatever it takes.’”

The total money raised was $50,000. Dallas police said Monday they had identified two suspects in the murder of the school’s all-time leading scorer. Emmett was 37.

“If you’re guilty of something ridiculously stupid and evil like that, you should pay the price,” Beard said.

Moving on from Kegler: Baylor put out a rather stunning statement in late September that Mario Kegler had been suspended indefinitely. He turned pro immediately.

“Mario was going to be a big piece to our team this year,” Baylor coach Scott Drew said of Kegler, who averaged 10.8 points last season. “At least it’s before the season so we have more time adapt with that.”

Key rules changes: The NCAA is moving back the 3-point line to the international distance of 22 feet, 1 3/4 inches at the top of the key and 21 feet, 7 7/8 inches in the corners.

“I think early in the year you’re going to see a lot more guys stepping out of bounds on the side just because there’s less space over there,” Texas coach Shaka Smart said.

Officials are going to get tougher on flopping, even giving out technical fouls to repeat offenders. Officials will start policing themselves on missed traveling calls, too. “Traveling has been our worst call in college basketball the last five or six years,” Shaw said. “We’re terrible at it.”