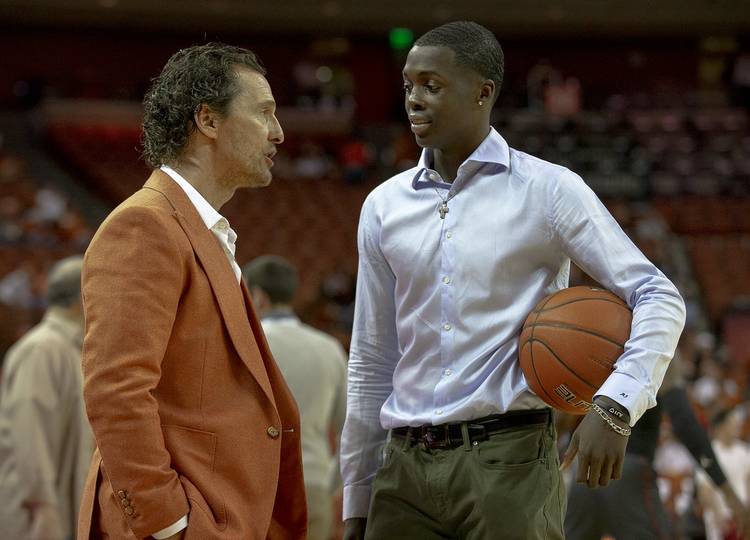 Coach Shaka Smart said Wednesday that Jones’ last treatment came in late September, just before basketball practice officially started. The 6-4 guard was 3-for-6 from 3-point range in a closed scrimmage against UTSA and led the Longhorns in scoring.

“His plan is to play this year,” Smart said during Big 12 men’s basketball media day at Sprint Center. “He’s definitely played well enough in practice to be a guy that gets significant minutes for us.”

On UT’s roster, Jones is classified as a redshirt sophomore, meaning he has three years of eligibility remaining. He played in eight games during the 2017-18 season before he started experiencing a shortness of breath. On Jan. 10, 2018, UT officials announced he had been diagnosed with leukemia.

Jones started down a long path of treatments, but still wanted to play basketball. He got into two games last season but played a total of 11 minutes. Every step of the way, Smart has been cautious to keep expectations low about what Jones can or can’t do as an athlete.

It’ll be interesting to see if he has similar production in UT’s second and final closed scrimmage Saturday against Ole Miss, scheduled to be played in New Orleans. NCAA rules prevent teams from publicizing the results, but they always somehow manage to leak out with no consequences.

“Certainly there’s an understanding that he still has to continue along the process that he’s on,” Smart said. “We don’t want to put any type of pressure on him to be exactly right back where he was before he got diagnosed. We really believe he’s going to be able to help our team.”

“Him being out last year really affected him, but his spirit is high right now,” Ramey said. “He’s able to play the game of basketball, which he loves. He just has a lot of joy. Watching him in the scrimmage against UTSA, it’s just crazy to think a couple of years ago, he wasn’t able to walk. So that’s inspirational to us.”

Getting defensive: Before Luke Yaklich arrived at Michigan, the Wolverines ranked 69th nationally in adjusted defensive efficiency during the 2016-17 season, according to Kenpom’s data analytics. Yaklich took over the defense. Michigan finished third nationally in the 2017-18 season and second in 2018-19.

The Longhorns finished 26th in adjusted defensive efficiency last season. Smart is expecting the defense to be even better this season now that Yaklich coaches in Austin.

In addition to stepping up the defensive intensity in practice, Yaklich is grading the Horns’ defensive prowess on every possession. His big statistic is grading close outs when any offensive player shoots from anywhere on the court.

“Our standard is contesting 80% of any shot that’s taken,” guard Matt Coleman said. “Starting in the summer, our team average was somewhere like 50-60%. Now, four weeks into practice, it’s been averaging 80%. You have some guys above that, contesting every shot.”

Injury updates: Ramey said he suffered a wrist injury in practice but isn’t expecting to miss the season opener on Nov. 5 against Northern Colorado. He’s been held out of recent practices to get rest.

“It’s getting better,” Ramey said. “Just taking it day by day, just trying to make sure nothing’s wrong. Nothing is wrong. Just trying to be there for my team and get ready for Nov. 5.”

Forward Jericho Sims also got scratched near his eye, a rather scary-sounding injury but he’s not expected to miss any games.

New arena coming: Texas officials are planning a ground-breaking ceremony for the new basketball arena sometime in December, although a formal date has not been announced.

“I think the wheels are moving,” Smart said. “Yeah, I don’t know exactly what I’m allowed to say.”

UT President Gregory L. Fenves pushed through an innovative partnership with Oak View Group LLC to build a $338-million basketball arena just south of Mike A. Myers Stadium and Soccer Field. The new arena is expected to hold 10,000 for basketball games and can be configured for 15,000 for concerts and other events.