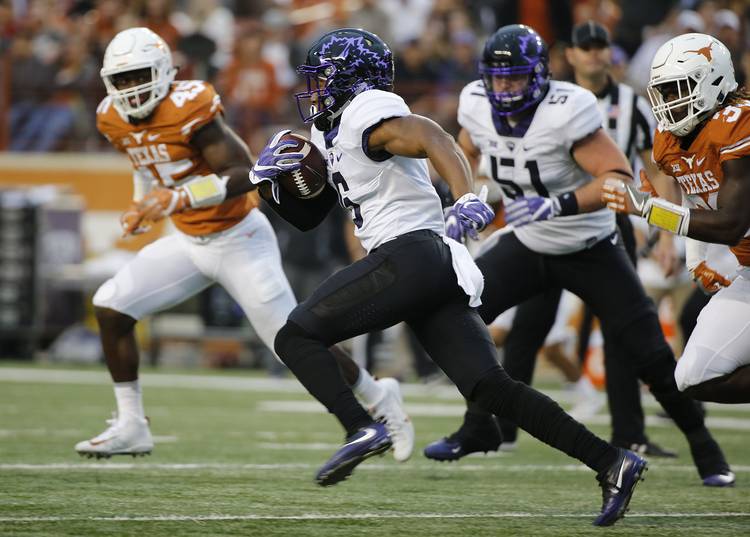 TCU #6 Darius Anderson runs the ball in the second half of the game against the Longhorns at Royal-Memorial Stadium in Austin, Texas on Friday, November 25, 2016. James Gregg/AMERICAN-STATESMAN

One month ago, the top rusher in the country was so well defended by the Longhorns that he found his effort deficient. Oklahoma State’s Chuba Hubbard gained 121 yards — a nice sum — but needed 37 carries, an average of 3.3 yards a pop in a game the Cowboys lost.

Much has changed in the last two weeks for the 15th-ranked Longhorns and their 119th-ranked defense. Oklahoma’s Jalen Hurts rushed for 131 yards, the most ever by a Sooners quarterback against Texas, and OU running back Kennedy Brooks rushed for 105 yards on only 10 carries. Last week, Kansas’ Pooka Williams had 190 yards, the most UT has given up in Tom Herman’s three seasons as coach.

Every team left on the schedule has a capable runner, starting Saturday with TCU’s Darius Anderson, who already has 103- and 99-yard games against Texas in his career.

“This is the Big 12,” Herman said. “There’s going to be some freaky, elite athletes each and every week.”

To their credit, the Longhorns defended Williams better in the second half, limiting him to 61 yards on 14 carries after defensive end Malcolm Roach returned from a first-half suspension for a targeting penalty during the loss to Oklahoma. Williams broke off a 65-yarder in the first half.

This week, Roach cited better tackling in the second half as the primary factor. Linebacker Joseph Ossai hopes the Longhorns benefit long term from that second half against Williams.

“He’s so elusive, and he’s very explosive,” Ossai said. “There was a lot of questioning about if we could tackle and if we could tackle in space. It built confidence being able to bring a guy like that down a couple times, stop a few key runs.”

As for the recent failures, Roach said, “nothing’s changed” about the Longhorns’ approach since Oklahoma State.

“We played a quarterback (Hurts) who was able to scramble and get yards,” Roach said. “Next we played one of the best running backs in the nation (Williams).”

The Longhorns rank 119th among 130 teams in total defense, allowing 469.9 yards a game, the most in school history. Yes, they have faced three of the top eight offenses (No. 1 Oklahoma, No. 3 LSU and No. 8 Oklahoma State), but they also yielded 569 yards to Kansas, which ranks 85th.

“You start to get into the month of November and you start talking about championships,” defensive coordinator Todd Orlando said. “You have to be playing some of your top ball. We’re a couple of weeks away, and obviously (at TCU) we’re going into a hornet’s nest. There’s a major urgency. “

The majority of criticism is aimed at the porous pass defense, which ranks 126th. But now run defense is an issue that requires attention. Next up for the Longhorns is Anderson, who averages 98 yards a game and an impressive 7.1 a carry.

Players said tackling practice, which they conduct on Tuesdays in full pads, addresses taking better angles toward the ball carrier and other fundamental issues.

“The biggest thing we want to do every week is be able to stop the run,” Jones said. “A lot of people get caught up in trying to make big plays for the team — all of us, me included.”

Horns lose local recruit: Manor defensive end Princely Umanmielen decommitted from Texas on Wednesday, calling it a personal decision on his announcement on Twitter. The 6-4, 294-pound end is a four-star prospect who had pledged to the Longhorns on Aug. 12; he picked up an offer from Auburn on Sept. 25 and took an official visit to Oklahoma in September, too.