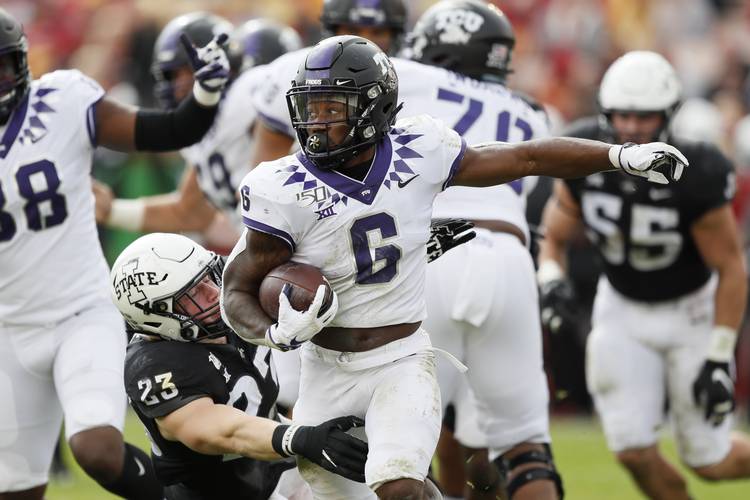 Here’s a look at five key matchups heading into Saturday’s game at TCU.

Throughout September, the Longhorns weren’t yielding much on the ground. It was their defensive backbone. But Texas let Oklahoma’s Jalen Hurts and Kansas’ Pooka Williams have strong days, piercing whatever aura the unit once had. Now here comes Anderson, who ranks fifth in TCU history by averaging 6.03 yards per carry for his career. This season, Anderson is gaining more than 7 yards per attempt. Right now, that’s enough to give him the edge against a Texas defensive line struggling to hold the point of attack and one that has only two sacks all season.

Granted, Ehlinger could be a key matchup topic every week, but going forward he becomes critically important. Ehlinger simply can’t have a bad day against anybody. TCU has the second-best pass defense in the Big 12. The Frogs have allowed only eight passing touchdowns all season. Ehlinger is completing 69.4% of his throws this season, and he’s still on pace to throw for close to 4,000 yards. Low scoring games always favor TCU. In coach Gary Patterson’s 19 years in Fort Worth, the Horned Frogs are 117-5 when allowing 17 points or less. Ehlinger should start quick with Collin Johnson, Devin Duvernay, Jake Smith and the rest of his crew, giving the Horns a leg up.

He may be inconsistent, but freshman Max Duggan has the nation’s third-longest active streak with 142 pass attempts without an interception. Jeff Ballard holds the school record with 154 pass attempts before a pick in 2006. Duggan has thrown nine touchdowns through seven games. Former TCU star Andy Dalton had 10 touchdowns by this point in the season along with 11 interceptions. Duggan doesn’t have a single interception yet, but he’s thrown for more than 200 yards only once.  It’s well known by now that Texas is on pace to have the worst pass defense in school history. This group is still without some key starters.

Patterson can’t be happy his team has lost seven fumbles this season and put it on the ground 16 times total. The Frogs are minus-3 overall in turnover margin. The Longhorns have been getting turnovers in recent games, like those four interceptions against West Virginia and two turnovers against OU. Joseph Ossai, Anthony Cook and Jacoby Jones all have forced fumbles this season. In a year where the defense is struggles, Texas can give itself a big leg up by punching the ball loose from a team that doesn’t secure it well. In coach Tom Herman’s three seasons at UT, the Horns are 14-3 whenever they win the turnover battle.

This has been an interesting two weeks for Herman. His team lost to rival Oklahoma and then looked rough in a 50-48 win over Kansas. The Jayhawks are probably still kicking themselves for leaving Ehlinger too much time. Now, Herman must take his team on the road to a place that aches to beat up Bevo. Since 2001, Patterson’s Frogs have won 170 games, one more than Texas during that same span. Patterson has obviously done more with less over the years. Since joining the Big 12, Patterson is 5-2 over Texas. Don’t think for a moment Patterson hasn’t been waiting for this week, dying to spring an upset.