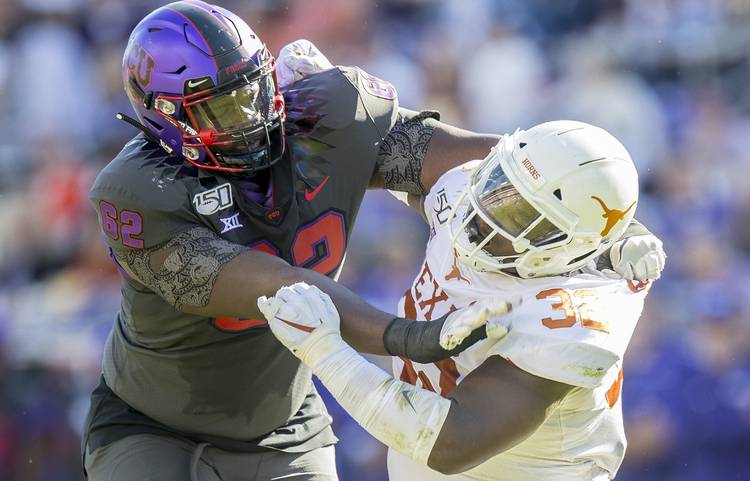 during an NCAA college football game at Amon G. Carter Stadium in Fort Worth, Texas [RICARDO B. BRAZZIELL/AMERICAN-STATESMAN]

FORT WORTH — Sam Ehlinger’s iron-fisted will and fearless determination can carry the Longhorns only so far.

At some point, having the worst defense in school history becomes a problem.

Eventually, an inability to rush the passer becomes a major issue. All those injuries in the secondary, be they an excuse or not, start to add up. Miscues on special teams, like negative punt return yardage or missed field goals, merely tempt fate.

Sooner or later, like on a day when Ehlinger doesn’t have any magic in him, it all comes crashing down. That’s what happened to No. 15 Texas on Saturday against TCU.

The Longhorns let freshman quarterback Max Duggan have his best day of the season in a 37-27 defeat at Amon G. Carter Stadium that will only enrage the faithful back home.

“Yeah, I hate losing,” said defensive tackle Keondre Coburn, who was holding back tears while leaving the field. “I feel like we worked so hard to be on that field, and then to come out with an L, the tears have to come.”

October has been miserable. Texas (5-3, 3-2 Big 12) watched its slim College Football Playoff chances disappear in the loss to Oklahoma. Coach Tom Herman was perturbed by the blowback over a two-point home win over Kansas. Now, the Horns are on perilously thin ice just to get back to the Big 12 championship game.

The defense yielded 435 yards as Ehlinger threw a career-high four interceptions. Duggan threw for a season-high 273 yards and two touchdowns (24 and 44 yards). He ran for a team-high 72 yards and drove in the dagger with an 11-yard dash with 1:59 remaining.

The Horned Frogs (4-3, 2-2) owned the day, as coach Gary Patterson usually does so far this decade. He’s now 6-2 over UT since joining the Big 12. Members of the TCU student body in the crowd of 47,660 even stormed the field.

Asked to evaluate his defense, Herman said, “We’re not good. And we need to be better.”

“We’ve got to come together and we gotta fight,” Herman said. “When you’re in a hole like this, the only way to get out of it is to fight and to work harder.”

Herman still has confidence in defensive coordinator Todd Orlando and said, “These things don’t happen by calling magic defenses or magic offenses. They happen by coming to work every day as coaches, given everything we have to our players, teaching them putting them in the right position to make plays.”

Roach was composed while speaking with reporters. Asked about Duggan, he said, “He made plays. He made more plays that our defense made.”

The rushing game wasn’t devastating but adequate. Keaontay Ingram had 71 rushing yards and caught a 17-yard touchdown pass on a perfect wheel route.

Ehlinger will kick himself for the turnovers, especially his third of the day on the final play of the third quarter. He rolled to his right and said he just wanted to throw it out of bounds. Trevon Moehrig had inside position and made a sensational diving grab.

“They didn’t do anything exotic or cut anybody loose,” said Ehlinger, who finished with 321 yards. “They did a good job of bringing pressure but also being balanced and making it difficult for our guys to get open.”

The coaches will be bothered by all those missed chances in the first half. Herman may be second-guessing himself with an outbreak of conservatism early. He opted for a field goal on fourth-and-1 from the TCU 3 on UT’s opening possession.

Duggan threw his only interception of the game when TCU got the ball back. Brandon Jones looked like a center fielder for the Astros with a midfield grab at the Texas 27. But the Horns couldn’t do anything with it as Ehlinger threw his first pick to Garret Wallow when he and Duvernay got their signals crossed.

The two teams traded blows. Duggan threw a 24-yard touchdown to Pro Wells. Ehlinger answered with a 47-yard strike to Duvernay, who looked up into the sun and ran under the deep ball.

Ehlinger twice missed on throws to Johnson into the end zone. Then Cameron Dicker hooked a 26-yard field goal attempt.

Even when TCU had a 14-yard punt, Texas still couldn’t make it happen. The Horns went three-and-out.

Let any .500 team hang around long enough, and you’ll have problems. Texas punter Ryan Bujcevski got hurt and left the game with 5:30 remaining in the third quarter. Then Reagor just ran by UT’s D’Shawn Jamison and straight into the end zone for a touchdown, giving TCU a 27-20 lead.

The Frogs went up by 10 on Jonathan Song’s 33-yard field goal with 11:28 remaining. Texas was in full hurry-up mode at that point. Ehlinger looked like his magical self leading a 12-play, 75-yard touchdown drive capped by Roschon Johnson’s 2-yard run.

But Duggan answered with a 36-yard heave to Taye Barber that moved the ball to the Texas 11. He ran it in himself on the next play.

Texas heads into the off week with a full list of questions and a laundry list of injuries. Getting safety Caden Sterns, linebacker Jeffrey McCulloch and running back Jordan Whittington back on the field for November will help. But it doesn’t change the fact the Horns have major issues that need to be fixed — if they can be fixed at all.

“There’s not a coach on the staff that’s going to allow any kind of wallowing or self pity,” Herman said, “and a really cool thing is, I think our leaders and our older guys are at the forefront of that.”

Texas-TCU notebook: For Brennan Eagles, ‘The right thing to do’ is sit after missed practice, Herman says