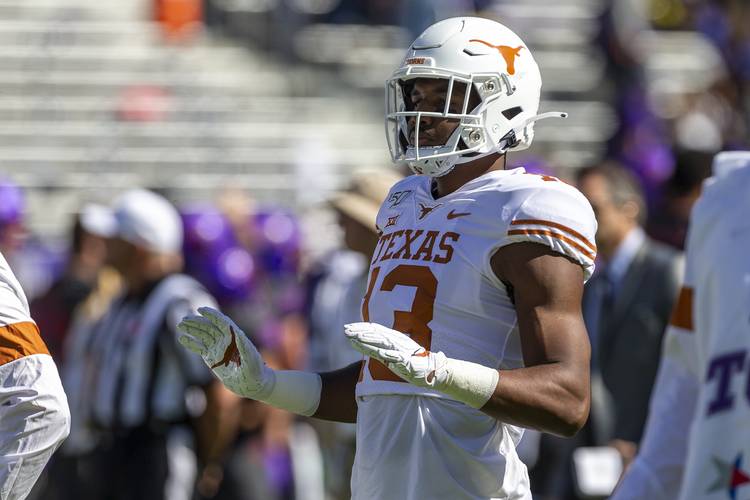 Texas wide receiver Brennan Eagles (13) dances to the music before an NCAA college football game in Fort Worth on Oct., 26, 2019. [Stephen Spillman for Statesman]

FORT WORTH — Five Longhorns caught a pass in Texas’ 37-27 loss at TCU. None of them, though, was Brennan Eagles.

Eagles, a sophomore, was benched for the game. Texas coach Tom Herman confirmed after the game that Eagles had missed a practice and team activities on Tuesday. Eagles was in uniform but would not have played unless there was an emergency.

“The right thing to do when you miss a practice around here is not go in the game,” Herman said.

Ahead of Saturday’s game, the 6-4, 225-pound Eagles ranked second on the team in receiving yards (367) and touchdown catches (five). His 19 receptions trailed only Devin Duvernay’s 61, Collin Johnson’s 21 and Jake Smith’s 20. Eagles’ 73-yard touchdown against Oklahoma State is the Longhorns’ longest play this season.

With Eagles out, 68% percent of UT’s 22 receptions and 85% of the 321 receiving yards were gobbled up by Duvernay and Johnson. Duvernay had eight catches, 173 yards and one touchdown. Seven catches led to 101 yards for Johnson.

Aside from Johnson and Duvernay, fellow senior John Burt was the only other receiver that caught a pass.

“We need everybody, that’s what coach always tells us,” Duvernay said. “That was a pretty big shot we took when that happened.”

Texas almost went three-and-our on its opening series, but dialed up a fake punt. pic.twitter.com/RO8LMMF6Ol

Herman did not reveal when Bujcevski was injured. The sophomore was slammed to the ground after he successfully executed a fake punt in the third quarter.  Four plays after his 3-yard run, Bujcevski tied his career long with a 56-yard punt.

Before the game, it was announced that safety DeMarvion Overshown did not travel to Fort Worth because of a shoulder injury. Overshown made his first career start in last week’s 50-48 win over Kansas.

Move over: Texas quarterback Sam Ehlinger threw four interceptions. The game wasn’t completely one to forget, though. In the loss, he passed Vince Young and Major Applewhite into second place on two all-time lists in UT record books.

His 17-yard touchdown pass to Keaontay Ingram was the 82nd touchdown that Ehlinger has been responsible for at Texas. That bested the 81 touchdowns that Young had from 2003-05. Colt McCoy’s 132 touchdowns are the school record.

The second of Ehlinger’s 22 completions moved him past Applewhite on that career chart. He has now completed 632 passes as a Longhorn. Once again, McCoy owns the school record (1,157).

Additionally, Ehlinger moved into third place among UT quarterbacks for touchdown passes (59). He finished the game with 7,585 career yards and passed Peter Gardere for fourth place on that list.