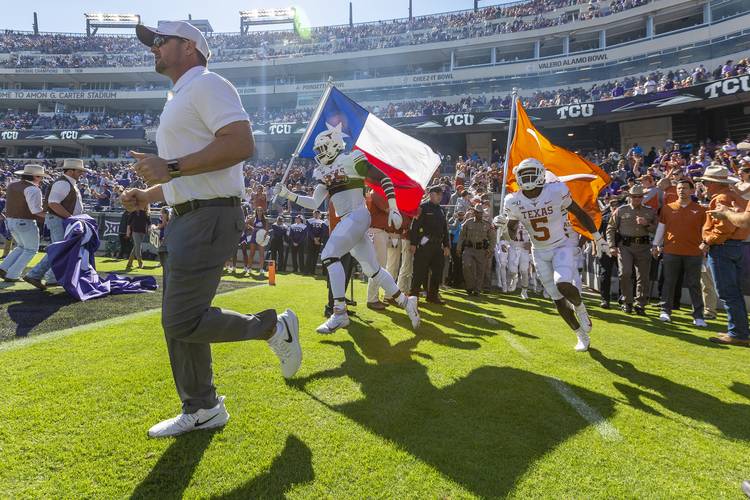 Texas linebacker Jett Bush (far right) joins his teammates and head coach Tom Herman as the Longhorns enter the field ahead a game against TCU in Fort Worth on Oct. 26, 2019. [Stephen Spillman for Statesman]

Facing fourth-and-1 from the TCU 3, Herman typically rolls the dice, especially early in the game.

On Texas’ opening possession Saturday against TCU, he chose the safer route. Dicker hit a 21-yard field goal and the Longhorns took a 3-0 lead.

“I was conflicted, certainly,” Herman said with a chuckle when asked about it Monday on the Big 12 conference call. “You know, how conflicted? I don’t know what the gauge of conflictedness is.”

Herman’s often-referenced “binder” is full of analytical data on when to go for it on fourth down. Don’t be surprised if Herman, knowing how the defense is banged up, presses his luck at times in the final four games of the regular season.

UT’s fake punt against TCU was an example of Herman’s go-for-broke mentality. Punter Ryan Bujcevski ran for three yards on fourth-and-1 from the Texas 34. “So I wouldn’t say we completely clammed up in that game,” Herman said.

The “binder” has failed Herman at times, like when Texas failed to convert on fourth-and-2 from its own 49-yard line against Kansas. It’s been right, too. Texas went for it on the goal line against LSU only to see the play end with Keaontay Ingram’s drop in the end zone.

“You guys love to talk about the binder, right?” Herman said the Monday before TCU. “I don’t always listen to it.”

Herman is a coach who always bets on himself, and that affects his decision-making in the heat of the moment. Dicker has hit two game-winning field goals in his career to beat Oklahoma and Kansas. But he also hooked a 26-yarder in the first half against TCU.

“It’s case-by-case,” Herman said. “The short field goal ones, I think you’ll see us be who we are against most defenses and that’s try to get more points.”

Good injury news: Herman said Bujcevski has not been ruled out for the season despite a broken clavicle injury suffered against TCU. Herman said backup punter Chris Naggar and Dicker will compete for the punting job during the off week.

Also, Herman remains optimistic the Longhorns will get a slew of bodies back for the Kansas State game on Nov. 9. Defensive backs Caden Sterns, B.J. Foster and DeMarvion Overshown, linebacker Jeffrey McCulloch and running back Jordan Whittington have all missed time with various sprains and strains.

“My expectation, if everything goes well, all of those guys will play against Kansas State,” Herman said.

Still in control: As bad as things may appear, the Longhorns are still alive for a spot in the Big 12 championship game.

“We don’t quite control our own destiny,” Herman said. “But if we handle our business, we’ll make sure we’re right there in the race.”

The kickoff for the Kansas State game will not be finalized until this weekend, the Big 12 announced. TV network officials put the game on a six-day hold, which means the game will start at either 11 a.m. or 2:30 p.m.

Kansas coach Les Miles turned videotape into the league office for review. Burks confirmed the mistake and said Monday, “It was an error by the clock operator.” The Big 12 assigns the clock operator to all stadiums, and the game’s outcome will not be overturned.

The Dotted Line: Recruits discuss the recent struggles — ‘Texas will get it going in the right direction’