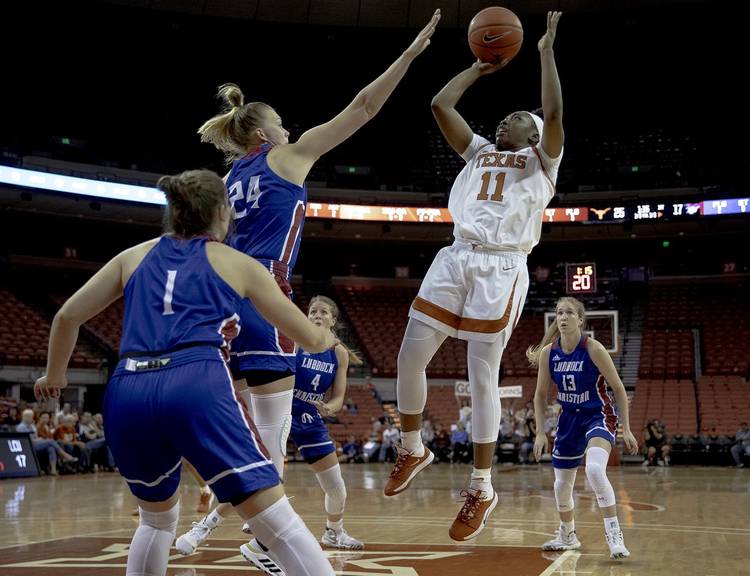 With the start of its 2019-20 season less than two weeks away, Texas got back to business on Monday night.

Sophomore Joanne Allen-Taylor scored 24 points to lead a short-handed Texas team to a 83-73 win over Lubbock Christian at the Erwin Center. In the exhibition game, seniors Jada Underwood and Lashann Higgs respectively chipped in 20 and 16 points.

Texas will travel to South Florida on Nov. 8 for its season opener.

“We haven’t got to play a real game in a long time,” Underwood said. “It’s not the real first one, but getting this under our belt and getting those jitters out (was fun).”

Texas never trailed against the a Lubbock Christian team that won 32 games and the NCAA’s Division II championship last season. Led by two three-pointers from Allen-Taylor, UT scored 15 of the evening’s first 17 points. Lubbock Christian pulled within four points during the fourth quarter’s first minute, but Texas distanced itself behind an 11-0 run that featured a 7-for-7 showing at the free-throw line.

Had Monday’s meeting not been an exhibition, both Allen-Taylor and Underwood would have recorded career-high point totals. But alas, Allen-Taylor’s best showing will remain last year’s 11-point effort against McNeese State while Underwood will still look to best a 19-point game against UTSA on Nov. 17, 2017. Against Lubbock Christian, those guards did their damage on 15-of-27 shooting.

As a team, Texas shot 40 percent from the field and 36.4 percent from behind the three-point line. The Longhorns committed nine turnovers and made 23 of their 27 free throws. Last season, Texas averaged 16.2 turnovers per game and sank just 69.5 percent on its free throws.

“I felt like they played a really hard game,” said Allen-Taylor, who also grabbed a game-high seven rebounds. “We’re still learning and we’re young and stuff. It was good to get that experience because they did play us the way we expected them to.”

In the 10-point win, Texas used eight players. Who was sitting on the team’s bench was also notable. Seniors Joyner Holmes (ankle) and Sug Sutton (foot), UT’s two representatives on the Big 12 preseason team, both sat. Sophomore Audrey Warren was sidelined with a concussion. Sophomore guard Karisma Ortiz, a Penn State transfer who has not been cleared by the NCAA yet, also did not participate.

Additionally, Texas kept mum about the status of freshman Ashlee Hannan. A forward from Australia, Hannan’s name was omitted from a game roster that did list Holmes, Sutton, Warren and Ortiz. Both Texas coach Karen Aston and a team spokesperson declined to comment on Hannan’s status.

The Texas roster, though, was reinforced by the return of Higgs and the addition of graduate transfer Sophie Taylor. In her first appearance since suffering a knee injury last November, Higgs notched 16 points, three assists and three steals. Taylor, an ex-Houston Baptist starter and Austin-raised guard who was OK’d by the NCAA on Monday, played just over 11 minutes.