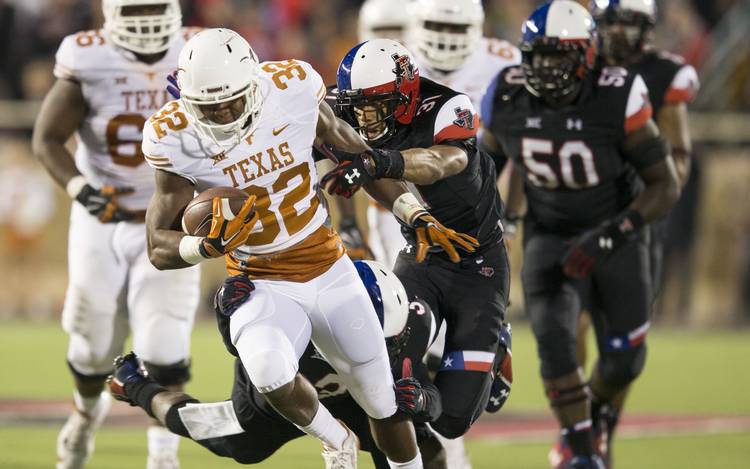 The headliner of each recruiting class helps determine its national perception. A quick look at the top-rated player from each of Texas’ classes this decade show an inconsistent pattern seen throughout recruiting and in the NFL draft. Scouting is an inexact science for recruiting sites and college coaches. Let’s examine the college careers of top prospects in each of Texas’ classes over the past decade.  The top-ranked commitment in the current 2020 class is five-star running back Bijan Robinson.

Recruiting rankings: No. 5 overall, No. 1 defensive end, No. 1 in Texas

Jeffcoat was a solid player for the Longhorns when healthy. The five-star played in eight games as a freshman and just six as a junior before injuries sidelined him for the rest of those two seasons. Jeffcoat became a second-team all-conference performer as a sophomore and was an anchor of the 2013 defense. He recorded 25 sacks and 47 tackles for loss in his career. He never found a permanent home in the NFL and even played some professional ball in Canada.

Brown never became a true No. 1 back in his college career. He usually shared carries with other talented backs, though he did leave as the school’s ninth-leading all-time rusher with 2,678 yards. He started each of Texas’ 13 games as a senior in 2014 and was a second-team all-conference selection. Brown posted 11 100-yard rushing games in his career and has made a nice NFL living with the Los Angeles Rams.

PHOTOS: Texas’ headliner from each recruiting class in 2010s

Recruiting rankings: No. 6 overall, No. 1 running back, No. 2 in Texas

The five-star status caused a perception problem for Gray. On one hand, the Aledo star never lived up to the hype like Cedric Benson, but Gray did finish his career with 23 starts and more than 2,000 yards career rushing in 46 games. Injuries plagued him throughout his career with him missing games in every season except his junior year in 2014.

The top-three rated signees in Texas’ 2013 class were offensive linemen and none of them became impactful starters. James spent two years at Texas before transferring to Auburn. He redshirted in 2013 before playing in six games in 2014. He started two games at right tackle.

The 2014 class was among the most disappointing in recent memory. Roberson is the perfect example of it. He redshirted in 2014 before participating in 10 games as a redshirt freshman in 2015. The former four-star prospect then transferred to Sam Houston State.

Recruiting rankings: No. 10 overall, No. 1 outside linebacker, No. 1 in Texas

Jefferson was a major recruiting victory for Charlie Strong. It never felt like the five-star ever reached his true potential at Texas despite starting 29 games in three years and earning co-defensive player of the year honors in the Big 12 as a junior. He declared for the draft after his junior year, but was cut by the Bengals before the start of the 2019 season.

Recruiting rankings: No. 37 nationally, No. 5 wide receiver, No. 4 in Texas

Duvernay was headed to Baylor until that program became snarled in the sexual assault scandal. It took the current senior a few seasons to learn the position and find consistent playing time, but he’s emerged as the team’s leading receiver as a senior. Duvernay currently leads the nation in receptions and could find himself drafted as a slot receiver. He rarely drops a pass and brings a physical element to the field to go along with his track speed.

This one worked out. The 2017 class was the transition class for Texas as Tom Herman took over for Strong. Ehlinger was committed to Texas before Herman was hired in November 2016 and would have ended up at Texas regardless of who was the coach. The life-long Longhorns fan immediately competed for starting snaps and is now entrenched as the face of Texas’ program. The local kid likely leaves Texas with nearly every major quarterback record held at Texas.

Herman convinced Sterns to flip to Texas and the rest is history. Sterns made his mark as a freshman last year. The five-star was the Big 12’s defensive freshman of the year and made first-team all-conference after starting 13 games and leading the team with four interceptions. His sophomore year has been marred with injury.

Recruiting rankings: No. 9 nationally, No. 1 athlete, No. 2 in California

There’s a discussion to be had about whether or not McCoy should even be considered a member of the 2020 class. His transfer from USC to Texas before the spring of 2019 counted him as a recruit for Herman, vaulting Texas’ class to third in the nation. But McCoy never took a snap for Texas, transferring back to USC before the start of his freshman season.

Whys of Texas: The phone lines are loaded with angry Longhorns, so go ahead, caller