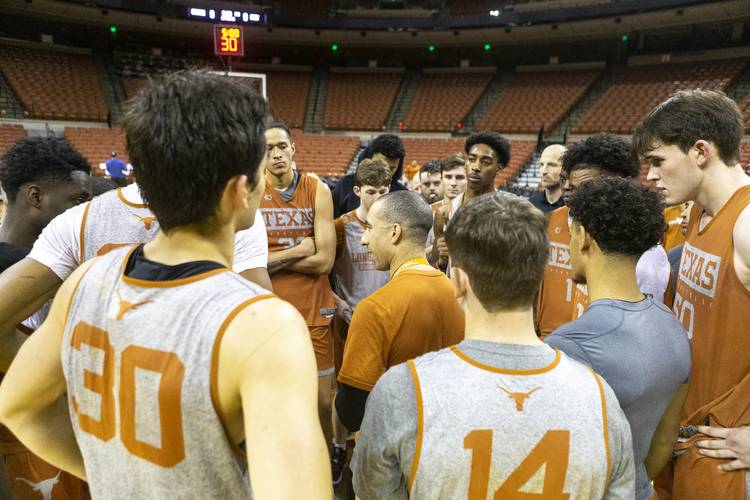 Jase Febres is one of the most self-aware athletes at Texas. He’s introspective, honest to a fault and sometimes a brutal truth-teller.

That’s why he doesn’t mince words when asked to evaluate the Longhorns men’s basketball program.

“Inconsistent. Really inconsistent,” said Febres, a junior guard from Houston. “Maybe not up to the standard where people think Texas should be at.”

“I feel like it’s kind of been that way for basketball and football a little bit,” Febres said. “Our standard has to rise, and we’ve been trying to attest to that every single day in practice. Just try to have a high standard. It’s up to us to go out there and produce.”

The Longhorns open the season Tuesday, and Cooley Pavilion’s inhabitants understand that everyone expects more. Use any metric you like. More consistency, more competitiveness, more wins in close games, more — or at least some — NCAA postseason success.

School officials have already updated the NIT championship banner hanging in the Erwin Center rafters. There will be no official unveiling on Tuesday before UT hosts Northern Colorado.

It’s because nobody on the sideline came to Austin hoping to win the NIT, much less celebrate it seven months after the fact.

Courtney Ramey sure didn’t. The St. Louis product said he wanted to go somewhere and help build a brand into a major college power. It’s not impossible. The college basketball landscape is littered with stories about one-year turnarounds. Several transfers went to Lubbock last season, turned Texas Tech into a Big 12 champion and reached the national championship game.

If winning can happen in Lubbock, surely it can in Austin, right? Texas is a program with 11 former players currently on NBA rosters. It produced a two-time Finals MVP. Missing the NCAAs altogether last season is a head-scratcher.

“(Texas) made it to the tournament a year before, but they didn’t win a game,” Ramey said of his recruitment. “I want to make it to the Sweet 16, Elite Eight, win a Final Four, possibly win a championship. Just bring that funk back to Texas basketball.

“Texas is a big program, and I want to bring that name back,” Ramey added. “I want it to be like, OK, we’re one of the blue-bloods like Kentucky, like Duke. Texas football did that, so why can’t Texas basketball do it?”

One major question has lingered throughout the offseason. How could Texas be so inconsistent during Big 12 play last January and February and then look so good winning five straight to clinch the NIT?

Smart himself wanted to know. He texted every player shortly after the season ended and wanted to see their responses.

“I was the F-it mentality,” guard Matt Coleman said. “This is what we’re going to do. You’re either with it or not with us at all. We’re going to do this for each other, do it for Texas and do it because we want to win.”

When framing expectations this season, there’s no need to hammer Smart about his tenuous situation.

UT administrators decided last March they would stick with the 42-year-old coach, despite public sentiment, even though the Horns missed the NCAAs. It was the second time that’s happened in Smart’s four seasons. The coach’s $13-million buyout was problematic, too.

There’s a feeling in some corners of the athletic department that Smart’s long-term status will be obvious come March. Either Texas will be back in the NCAAs or athletic director Chris Del Conte will likely make a change.

This team was picked to finish fourth in the Big 12 preseason coaches poll. However, UT did not get a single vote in the Associated Press Top 25 preseason poll. “At the end of the day, that’s somebody’s opinion,” Ramey said.

Ramey correctly pointed out that Tech was picked seventh in last year’s preseason poll. Nobody picked Kansas State to make much noise, either. Those two teams ended up splitting the Big 12 title.

“Opinions only go so far,” Ramey said. “Our play is going to take us where we need to go.”

At Big 12 media day in Kansas City, Smart said the returning roster is full of players that “went through some extreme ups and downs” last season.

“We told those guys about a week ago going into our last scrimmage,” Smart said, “we had a few practices before and we said, ‘Hey, we’re having tryouts. You guys are all on the team. But in terms of a rotation or who’s starting or who comes off the bench first, that’s TBD.’”

These Horns will win or lose based on Ramey and Coleman, two floor leaders that have earned Smart’s trust. And 6-9 Jericho Sims returns after spending the last two seasons dunking alongside Mo Bamba and Jaxson Hayes, both now in the NBA.

Gerald Liddell, a 6-8 forward, might be a breakout player this season after his burst in the NIT. Kamaka Hepa, the Alaskan 3-point threat, has worked on his consistency. The Horns have three solid freshmen, and Andrew Jones should play “significant” minutes now that he’s moved beyond leukemia treatments.

First-year assistant Luke Yaklich has the duties of a de facto defensive coordinator. New strength coach Andrea Hudy, who oversaw Kansas’ long run of dominance, is getting people moving in the weight room.

“I think fans are going to see us play really hard and together, a lot of movement and actions being created,” Sims said. “We’re going to be exciting. We’ve been focused on defense, especially.”

There’s a lot to like, if you’re optimistic. Nobody should begrudge the pessimists, though.

Fans have been voting with their feet. Last season, UT’s announced average home attendance was 8,650. Most games, there were usually only a few thousand inside the Erwin Center at tipoff. The athletic department announced that single-game tickets start at $10 this season.

“We know as a group that we’re not getting the same love that Texas football gets,” Febres said. “But regardless, we have to know that we’re playing this because we ultimately want to win for the university. When people start seeing that we’re winning, then they’ll come.”

And thus begins another season of Texas basketball.

Everyone inside Cooley Pavilion understands they’re shooting for a return to the NCAAs.

Texas’ notable number: Tight ends in the Longhorns offense — and the number 11