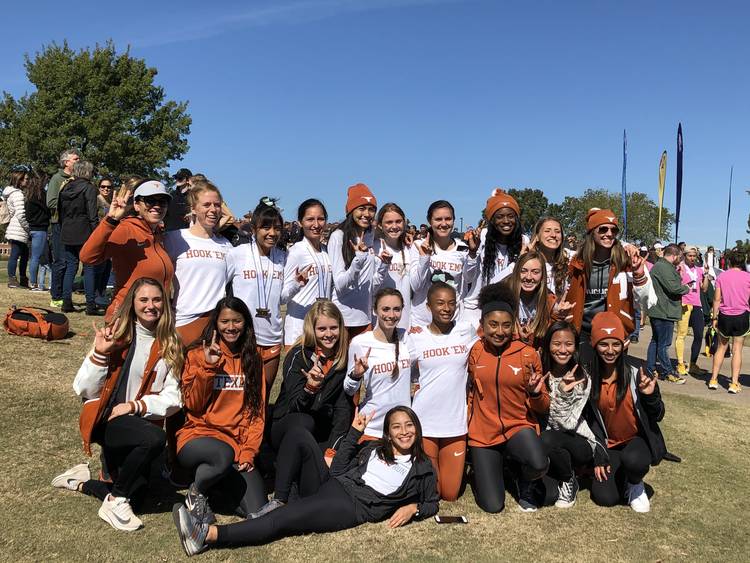 WACO — A banner day at Cottonwood Creek Golf Course saw the University of Texas women’s cross-country team run to its best Big 12 Championships finish since 2011, but runner-up honors were bittersweet as the Longhorns were just two points shy of capturing their first conference title.

“To be that close… you just never know if you’re going to have a chance like that again,” Plumer said. “To have four girls all-conference and not win is really tough.”

Kathryn Gillespie, a graduate transfer student from Harvard, led the Longhorns for the second time this season with a fourth-place, 20:43.4 run. Claudine Blancaflor and Destiny Collins crossed the finish line two seconds later in fifth and sixth place, as Texas had three runners in before any other team.

“There’s nothing to be upset about, it’s just hard to be so close and not quite get the victory,” Plumer said. “You can’t be a competitor and walk away happy to be that close, but you can walk away proud.”

Collins, one of the top runners for Texas since her freshman year, was pleased to improve on the team’s fifth place finish in 2018 but had hoped for more.

“This weekend is very bittersweet,” she said. “We knew it would be really close coming in, so we really gave it our all and to get second is really exciting but to be two points out of first… it really hurts.”

As the women look ahead to the NCAA South Central Region Championships on Friday, Nov. 15, Plumer says they’ll be both “hungry and confident.”

“We haven’t been in contention for a long time,” Plumer said. “In the past, you needed someone else to do badly for us to be successful. In this case, it was three good teams who laid it all on the line and it could easily be us in third and West Virginia in first and Oklahoma State in second. That’s why we race.”

A very young Texas men’s team placed third in the team standings with 72 points behind No. 5 ranked Iowa State, who captured their third consecutive Big 12 XC title with 34 points, and Oklahoma State (58 points).

“He had to give a big effort to get back up there in the mix,” UT men’s cross country coach Pete Watson said of Rice. “His courage to get back in there and not back off was great. He lost 20-some places at the time and had to work his way back up.”

“I’m excited about the direction of the program, that’s for sure,” Watson said. “Haftu ran great today, Crayton is figuring out the 8K distance and Cruz is coming along, too. We’re going to win one of these titles in the future. It’s not going to be easy but we’re definitely putting the pieces together for it.”

Iowa State’s Edwin Kurgat led the Cyclones’ title defense by capturing his own second straight Big 12 individual cross country title in 20:48.7. Fellow Cyclone Cailie Logue also repeated her individual victory on the women’s side with a winning time of 20:08.2 for 6K.

What target? Horns close out first week atop AVCA poll with sweep of West Virginia