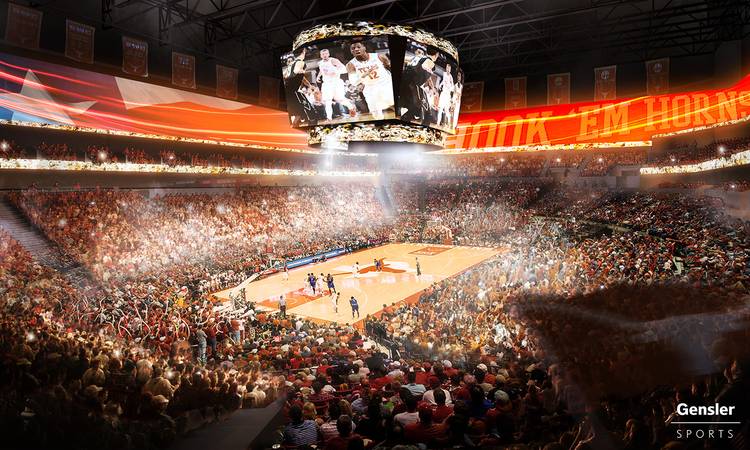 The University of Texas System Board of Regents has authorized the flagship campus in Austin to partner with a company that will pay to build and then operate a $338-million basketball and multipurpose arena. (Gensler)

A new basketball arena is coming to Austin. Still, there’s always been a lingering question: where will the Longhorns practice once Cooley Pavilion is demolished to make way for the expansion of Dell Medical School.

A plan for a new stand-alone facility is coming into focus.

Texas athletics will ask the UT System Board of Regents for approval to start working with Oak View Group to build a 64,000-square foot basketball practice facility, according to the UT regents agenda posted Tuesday.

When asked to comment, Texas athletic director Chris Del Conte said, “I’m not commenting on anything that’s going before the board of regents for approval.”

Texas has already engaged Oak View Group LLC to build a new $338-million basketball arena scheduled to open in 2022. The groundbreaking ceremony is scheduled for December.

Initially, there were plans to put a practice facility underneath the new arena. But that plan was considered unworkable. Another plan called for portions of the Recreational Sports Center to be converted into a full-time practice facility.

Now, it appears a stand-alone facility will be built in an area bound by East Martin Luther King Jr. Boulevard, the Interstate 35 frontage road, Clyde Littlefield Drive and the redesigned Robert Dedmon Drive — essentially in the same area as the new basketball arena.

The initial agreement is a 35-year pact, and UT would control the building when that term expires. The two sides still have not finalized a contract, although a school spokesman said one could be finished by the end of this year.

Most of those 60 dates would be used for UT men’s and women’s basketball games and university ceremonies like graduation. The rest of the year, Oak View Group is expected to attract concerts and other events that would typically fill arenas.

The basketball seating in the new arena is set for about 10,000. However, the full configuration for bigger events is expected to be 15,000.

A practice facility would be a place where the men’s and women’s basketball athletes could go 24 hours a day, like they can currently in Cooley Pavilion. That 44,000-square foot facility is located adjacent to the Erwin Center.