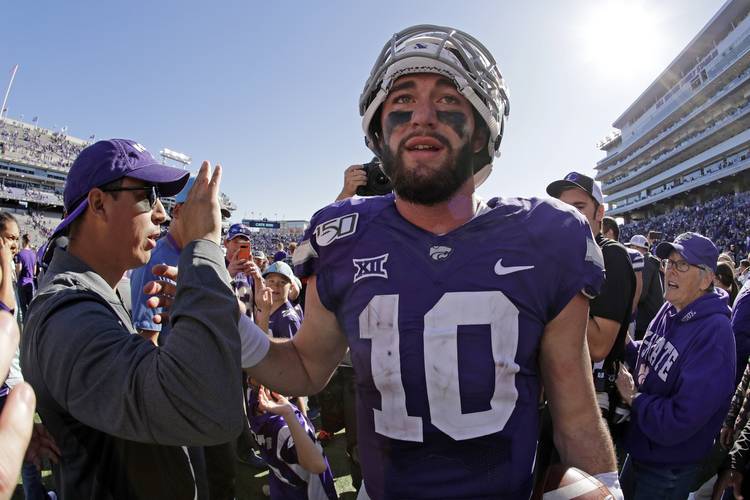 The Texas head coach noted that Thompson is thriving in the Wildcats’ new offense. He called Thompson the “gas that makes their engine go,” and said Kansas State’s offense is “fun to watch.” But before he heaped praise on Thompson, he paused to check his notes to make sure he was pronouncing the quarterback’s name correctly.

If Herman needed any help, he could have just consulted anyone at Oklahoma.

Thompson, after all, rushed for four touchdowns in the Wildcats’ 48-41 upset win over the Sooners two weeks ago. And whoever was working the public address system at Kansas’ Memorial Stadium last week is now fluent in talking Thompson too, since he had three touchdown runs in last week’s Sunflower Showdown win in Lawrence.

This season, Thompson has thrown seven touchdown passes for No. 20 Kansas State (6-2, 3-2 Big 12). His 10 touchdown runs rank 16th nationally. With Thompson under center, Kansas State is averaging 33.4 points per game.

“Kansas State has always, since I’ve been here, (been) a super physical team and it shows,” said UT safety Brandon Jones, whose team will host Kansas State at 2:30 p.m. on Saturday. “Their quarterback’s obviously not afraid to pull it and run it and make plays.”

In recent weeks, Texas (5-3, 3-2) has faced its share of mobile quarterbacks. Oklahoma’s Jalen Hurts and Oklahoma State’s Spencer Sanders each topped 100 rushing yards against the Longhorns. Four of the nine touchdown runs surrendered by Texas in Big 12 play have been scored by quarterbacks. In a 37-27 loss at TCU on Oct. 26, the nail in UT’s coffin was an 11-yard touchdown jaunt by Horned Froqs quarterback Max Duggan with 1:59 remaining.

“When you have somebody that’s dual-threat, no matter what team they play on, that’s always super hard to do,” Jones said. “If you’re in man coverage, you have to worry about the guy that you’re covering, but then he can also make plays with his feet. It’s always a much harder game and harder to game-plan a guy that can do both.”

Texas center Zach Shackelford once was committed to the same Kansas State recruiting class that signed Thompson. Shackelford remains friends with Thompson and said the Wildcats quarterback shares some traits with Longhorns quarterback Sam Ehlinger. “(They’re) both fierce competitors, really good arms, they can get out of sticky situations with their legs,” he said.

Against Kansas, Thompson ran for a career-high 127 yards and had five gains of at least 10. Texas defensive lineman Keondre Coburn noted that on one play, it appeared that Thompson would be stopped by a Kansas safety, but that Thompson “literally broke the tackle and ran for another 15 yards. It was amazing to me.”

The Longhorns are aware that they’ll need to turn Thompson into a one-dimensional threat. In last year’s game in Manhattan, Thompson split snaps with Alex Delton. Thompson rushed for a touchdown in the 19-14 loss to the Longhorns, and finished the game with minus-1 rushing yard and 96 passing yards on 18 attempts.

This year, he has yet to record a 220-yard passing performance. He’s completing 60.5% of his passes, which places him 71st nationally among quarterbacks (Ehlinger is 26th, at 65.7%). Only once this fall has Thompson completed more than 20 passes in a game.

“(We need to) keep him in the pocket,” Coburn said. “Keep them doing something they don’t want to do, (which) is pass the ball. I think that’s the key to beat any mobile quarterback, is keeping them in the pocket.”