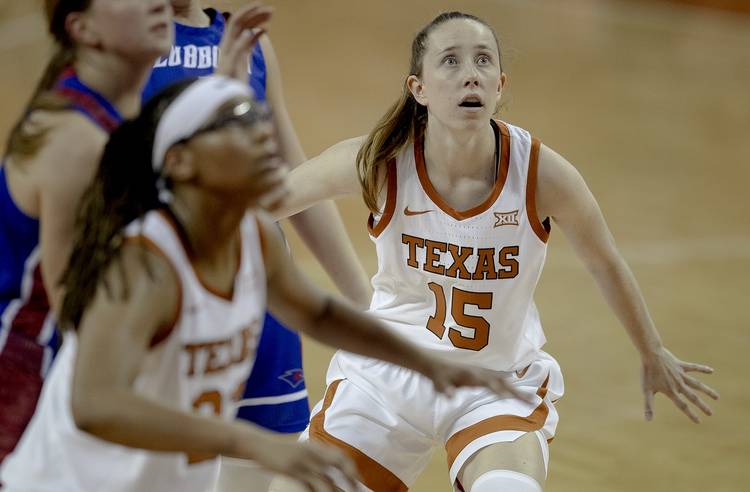 If you had asked Sophie Taylor a few weeks ago, she would have told you she was retired.

That, of course, is a bit of hyperbole. The 21-year-old aspiring accountant hasn’t even entered the workforce yet. But Taylor did think she was done playing basketball after a three-year run at Houston Baptist.

Taylor, though, will be on the Texas roster when it opens its season on Friday at South Florida. The Austin native began the school year as a graduate student in the McCombs School and walked on to the Longhorns last month.

“It has been quite hectic, to say the least, going from just 12 hours of class to a full student-athlete,” Taylor said. “Any playing time is good for me. I’m just trying as hard as I can, see what I can do.”

Even with two offseason transfers, Texas still figured to have a rotation of 12 players. But four Longhorns — guards Sug Sutton (foot), Isabel Palmer (foot) and Audrey Warren (concussion) and forward Joyner Holmes (ankle) — have been dealing with injuries. On Wednesday, sophomore guard Karisma Ortiz learned that she must sit out this season following her transfer from Penn State. And freshman forward Ashlee Hannan has been removed from the roster without any explanation.

With the roster depleted, Texas threw up basketball’s equivalent of a Hail Mary. UT analyst coordinator Kelby Jones began scouting the campus and identified Taylor as one of two eligible students who had formerly played college basketball. Taylor, who continued working out following her graduation from Houston Baptist, learned about the need for walk-ons through the intramural team she had just joined.

Taylor connected with the basketball program, which led to a meeting with head coach Karen Aston. After receiving assurances that basketball would not interfere with her academics, Taylor joined the team. Last week, the NCAA approved her graduate transfer and she played 11 minutes in the exhibition game against Lubbock Christian.

“You have to give her some props for walking on the court (against Lubbock Christian) and not looking like I don’t know what planet I’m on. She tricked me, even,” Aston said. “She has played three years of basketball in college, I think that’s one thing to keep in mind.”

While in high school, Westwood coach Doug Davalos would tell Taylor that she could play in the Big 12. She might not start, but she could definitely play in the league. Taylor, after all, was the District 13-6A MVP  her senior year. The two players who won that award before her were future college standouts — Texas guard Lashann Higgs and TCU’s Jordan Moore.

Taylor, however, never gained much traction as a recruit. Davalos said his star guard “played on her select teams like she cared as if they won.” In other words, Taylor was more focused on fundamentals than highlights and gaudy statistics. Davalos believes that caused her to slip under the radar.

She grabbed the attention of William & Mary and St. Edward’s during her senior year, but signed with Houston Baptist, a Division I basketball program that plays in the Southland Conference. Taylor started 44 times for the Huskies, with the first of those actually coming against Texas at the Erwin Center in 2016. As a junior, she averaged 10.3 points, 3.0 rebounds and 2.8 assists per game.

Houston Baptist closed out last season with a 74-56 win over Texas A&M-Corpus Christi. Taylor scored 18 points in the victory. And with what should have been the last shot of her college career, Taylor sank a three-pointer.

Less than eight months later, though, she’s wearing a different uniform. When asked what Taylor’s role would be this season, Aston didn’t have much of an answer. Taylor shot 35.3% from three-point range last year, and Warren noted that “she can shoot the heck out of the ball.”

Taylor will likely work with the scout team and spell teammates who either need a break or are in foul trouble. She averaged 26.9 minutes per game last season. That playing time will go down, but Taylor remarked that “I am so good with that.”

“Texas got the best-case scenario. I’m not acting like they need Sophie, but you couldn’t ask for a better situation,” Davalos said. “I think they are going to find out as they go on that if they need her to play a few minutes, she is going to hold her own. If you need her to be a practice player, she’s going to do that, too.”

Helen Tau, who walked on with the Longhorns and appeared in 10 games during the 2013-14 season after serving as a team manager, has joked with Aston that Taylor has her big shoes to fill. As for the jersey that Taylor will fill, it’ll be the No. 5 that she has preferred since high school. She had to wear No. 15 against Lubbock Christian because her jersey wasn’t ready yet.