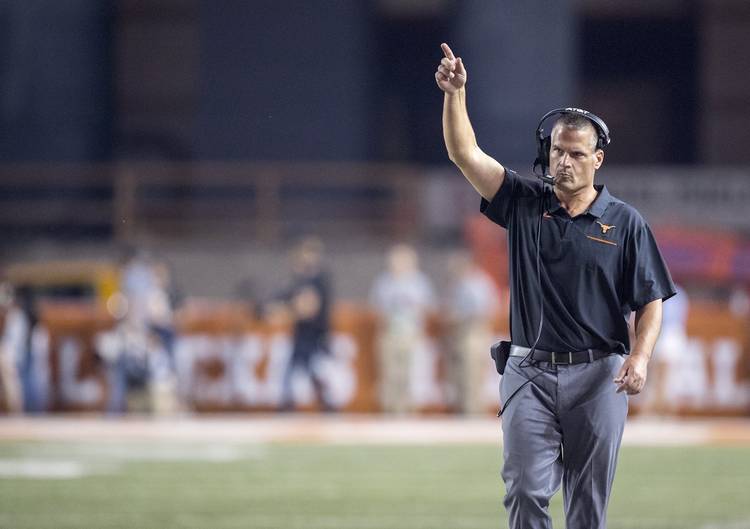 Defensive coordinator Todd Orlando calls out a play to his defense against Kansas Jayhawks during an NCAA football game on Saturday, Oct. 19, 2019, in Austin, Texas. [RICARDO B. BRAZZIELL/AMERICAN-STATESMAN]

Texas defensive coordinator Todd Orlando said he still has complete faith in the Longhorns’ defensive scheme and three-man front despite this shaping up as the worst unit statistically in school history.

“Yeah. Oh, yeah. There’s no doubt about it,” Orlando said after Wednesday’s practice.

Meeting reporters for the first time since the TCU loss on Oct. 26, Orlando acknowledged that “You guys want to see us line up and just, you know, send six guys and sack the quarterbacks and do all that.”

Orlando, who loves blitzing from just about anywhere, has never shied away from questions about Texas’ lack of quarterback pressure this season. He’s always been a realist.

In September, UT coach Tom Herman dismissed the defensive line’s lack of quantifiable output, saying that defensive linemen should be judged differently. “Do you disrupt the offense? And if the answer is yes, you’re doing your job,” Herman said after the LSU loss.

Fast forward to the TCU post-game press conference, Herman had a different tone about his defense overall. “We’re not good. And we need to be better,” he said.

This season, Texas’ defensive line hasn’t been able to produce any consistent pass rush. Most of UT’s pressure comes via the blitz. Linebackers Joseph Ossai and Juwan Mitchell have five sacks combined, for example.

But Orlando, who preaches a “keep swinging” mentality, believes in sticking with the same fundamental approach for the final four regular-season games.

“My experience with things has been to get better at what you’re doing,” Orlando said. “This is what you did wrong, but guess what? We’re not going to do this anymore for two weeks so don’t worry about this. Let’s go get something else wrong and try to figure that out. It’s not going to be that way.

The Longhorns are allowing 465.5 yards per game, a figure that ranks 118th nationally and would set a new school record. Texas allowed a record 452.6 yards per game in 2015 and 448.2 yards in 2016, both under former coach Charlie Strong.

UT’s secondary has been hammered by injuries. The Horns are expecting to get serious reinforcements this week with the return of defensive backs Caden Sterns, B.J. Foster and DeMarvion Overshown.

However, Texas has been mostly injury free in the defensive line and linebacker units.

“They’re going to make plays, and then they’re going to get some more confidence going into it,” Orlando said. “But to me, you can’t push the panic button. To me that lack of faith, whatever you want to call it, that’s not the message you want to send to anybody.”