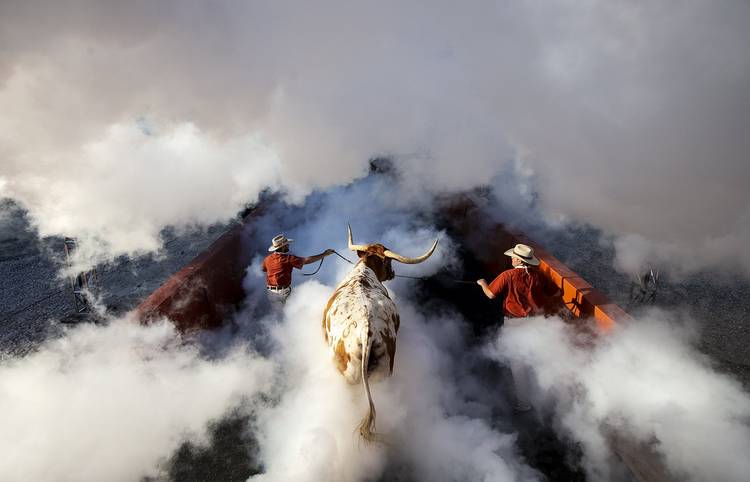 This week’s Whys of Texas has a coherent theme consistent with all previous UT seasons heretofore: Either you still believe in this group or you don’t.

There is no space between the two, apparently.

Well, let’s start with the fact that Texas (5-3, 3-2 Big 12) faces a critical, huge, unmistakably massive fork in the road Saturday against No. 20 Kansas State (6-2, 3-2). The Horns are coming off a bye week, which should have given them a chance to regroup and focus on what comes next.

“The rest over the bye week was incredible,” quarterback Sam Ehlinger said on Tuesday. “I know personally for me, I feel I got sufficient sleep, got to rest, hang out with family. So, motivated, ready to get back to work.”

The Horns are getting at least four players back this week — defensive backs Caden Sterns, B.J. Foster and DeMarvion Overshown, and running back Jordan Whittington. It’s possible that linebacker Jeffrey McCulloch returns, but it depends on how his shoulder is feeling as the week progresses.

This is a line-in-the-sand moment for Texas coach Tom Herman and his staff. Can you get the team prepared with an off week and a boost of depth for what is truly a must-win game?

Remember, we as humans are an optimistic lot.

Q. I’m interested to see how this team responds with some starters back, being unranked and playing a ranked team at home. Pride? Heart? — Brett

All the above, Brett. All the above. I’m not kidding, either. Falling out of the Top 25 should have been a true wake-up call for anyone still in denial.

See, now that’s the spirit. I’ve said numerous times this season that anything short of getting back to Arlington for the Big 12 championship game is a failure. So 9-3, 8-4, 7-5 or whatever, if the regular season ends with Texas not playing at AT&T Stadium, then yes, that would be a step backward.

Q. How are the Horns going to stop all the decommiting recruits? What was once a top 5-6 class is now looking at 15 or worse. — Robert

Losing two recruits in itself isn’t that alarming. One of those was Ethan Pouncey, younger brother of sophomore wide receiver Jordan Pouncey, who quit the team over lack of playing time. The Pounceys are from Florida, so it’s a long way from home to be unhappy. What is more troubling is that Texas lost two four-star cornerback recruits. Those don’t exactly grow on trees. UT’s class still ranks sixth nationally, according to 247Sports’ composite ratings.

Regardless if Texas goes 4-0 or 0-4 down the stretch, Herman has to take a long, hard look at his staff for 2020. Only Herman can answer this question: Are these the right 10 assistant coaches to help Texas compete for championships? We can pontificate all day over whether this assistant should be fired, demoted or whatever. Herman is the one making the final decision, and it’ll be without serious pressure from athletic director Chris Del Conte. The AD believes in hiring the head coach and letting the head coach hire and fire the assistants.

Oh, and as for your last question, Herman isn’t getting fired even with an 0-4 finish. He would have some serious explaining to do, though.

Q. Is Tom Herman a fraud? That whole Mensa thing appears to be more important to him than winning? — Kevin

Oh dear. Well, I don’t know about fraud. But I do believe this month will be the greatest challenge Herman’s ever faced as a head coach. Think about his two years in Houston. Both of those teams cruised to the finish line. In 2017, Texas battled just to reach a bowl game. Last season’s team overachieved, getting all the way to the Sugar Bowl. Now Herman guides a program with elevated expectations but no clear-cut, smooth path to eight or nine wins.

A loss to K-State on Saturday opens the door to a possible four-game losing streak. Suddenly, those road games at Iowa State and Baylor look dicey as hell — as if they don’t already.

I still go back to Herman’s own set of expectations. He truly thought this team would compete for a Big 12 title and be in the College Football Playoff mix. That should be Texas’ baseline standard every year — no matter who’s coaching the team.

Q. Disappointed by the loss to TCU. Poor offensive game plan and defense is a continuing problem. Have they totally abandoned the run game? This should have been a win. — Francine

To me, that’s a fair analysis. Texas had 126 rushing yards in that 37-27 loss to TCU. Keaontay Ingram had 71 yards on 16 carries while Ehlinger had 43 yards. Where was Roschon Johnson? We didn’t really see him until the fourth quarter. He finished with nine yards on five attempts. That’s just not enough for a guy who had been rather dynamic all through October.

Will getting Whittington back make that much of a difference? Sorry, but I’m not sold on that just yet. The freshman will be playing in what is only his second collegiate game on Saturday. And he’s rusty, having missed almost two months with that sports hernia injury. If he goes wild, let’s all come back to this space next week to see me put spicy habanero on my crow.

Would his head explode with that question? I’m going to say, possibly, yes. Equipment, or a lack thereof, is not the issue. Football is a violent game, friends.

Hey, I thought we were staying positive today, no?

Q. Is there still a path to the Big 12 championship? And if so, what does it look like? — Venkata

It’s rather simple at the moment. Texas needs to win out and have Oklahoma beat Baylor. That’s not as easy as it sounds, though.

If forced to pick, I’ll take Iowa State. That game will be at 2:30 p.m. in Ames, a huge break for UT. No way I’d want to go in there at night in mid-November. The Baylor game in Waco … man, oh, man, Charlie Brewer is good.

Q. Where’s the confidence level on the part of the players for this coaching staff as far as game planning and player development? — Montie

It’s always hard to gauge where player sentiment is on any given week. The players are always coached up to say the right things with reporters. For example, it’s easy to get jacked up for Oklahoma. You can tell the players are amped. But games like Kansas State, coming off a bye week, it’s harder to tell how they really feel. That’s why it’s on Herman and the coaches to get the players ready to go.

In August, it was my strong belief that this team was still a year away. Go back and listen to any of those preseason podcasts. But you raise a salient point. It’s hard to get too worked up over a team you thought wasn’t going to truly compete nationally until 2020. That said, everyone expected Texas to compete for a Big 12 title in 2019.

It’s OK to be upset over this team’s stumbles. How they are stumbling is what’s maddening. No consistent pass rush. An off-and-on running attack. Woeful decisions in the return game. These are not the hallmarks of a championship-level program.

But these are also problems that cannot be fixed during a Tuesday or Wednesday practice in November. These are offseason issues. The Horns simply must make the best of it through this final month and hold the line.

Can this team win four straight to close out the regular season? Absolutely.

Can this team win the home games but lose two on the road? Absolutely.

Therein lies the rub. Nobody can say with absolute certainty what these Longhorns will do, not even Herman. And that’s why everyone’s on edge.

Have a question for the Whys of Texas mailbag? Email bdavis@statesman.com or via Twitter (@BDavisAAS).