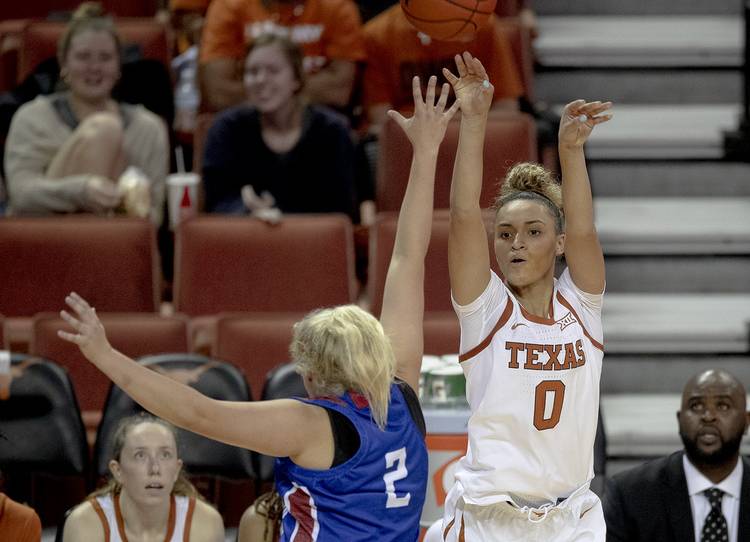 The sight of Higgs swishing that shot was a welcome one for Texas fans. For one, Higgs was playing for the first time since a knee injury ended her season lat year. That 3-pointer — and the seven others that Texas sank that night  — also signaled that the Longhorns may have a long-distance plan this season.

“Watching (the exhibition match), we shot the heck out of the ball,” sophomore guard Audrey Warren said. “I’m pretty excited for us to do that.”

But guard Danni Williams, whose 67 3-pointers led UT, is no longer playing. Destiny Littleton took her 37 3-pointers and transferred to South Carolina. Chasity Patterson, who won the 3-point contest at the 2017 McDonald’s All-America Game, left the team this past November and is now at Kentucky.

The departures of Williams and Littleton left Sug Sutton (20) and Warren (12) as the only ones who hit at double-digit three-pointers at Texas last season. Sophie Taylor, a graduate transfer who walked on last month, did record 42 3-pointers while playing at Houston Baptist last year.

The Longhorns, though, don’t seem too concerned about the lack of 3-point shooting among their returnees. Head coach Karen Aston has said shooting was emphasized in the offseason. She added that associate head coach Jamie Carey orchestrated a handful of “crazy shooting competitions that I don’t even understand.”

What does one of these “crazy shooting competitions” look like? Sophomore guard Joanne Allen-Taylor said her favorite one consisted of making 99 shots within five minutes. Higgs said the games installed discipline and consistency in the players’ shooting habits.

Carey preached efficiency throughout the summer — “it doesn’t have to be thousands and thousands of shots every day. If you just get in for 30 minutes every day, it’s amazing to see the number of shots that accumulate.” The drills were geared for positions. Scores were also kept.

“I think they did get competitive with it, for sure,” said Carey, whose 193 3-pointers from 2002-05 rank fifth in UT’s record books. “I also think it helps teach habits, which is what it takes to be at this level.”

Carey noted that players’ shooting percentages improved during their offseason workouts. Against Lubbock Christian, Texas knocked down its first three three-pointers. UT’s 22 three-point attempts that evening were split among seven players. Allen-Taylor (three), Higgs (two), Isabel Palmer (two) and Jada Underwood (one) each made a deep shot as Sutton and Warren sat with injuries.

“I wouldn’t put anything on one or two kids. I think that there’s enough out there that can make open shots that it’s not just on one,” Aston said. “Maybe that is what was hard for Danni last year, was that she was the one. It was easy to key on her, easy to chase her and run her off the line. I hope that we don’t have that situation this year where it’s just one player that’s expected to make a three. I don’t think that will be the case.”

Three-point shooting is not a necessary ingredient in a championship recipe. Idaho led the country with 387 3-pointers last season and did not make the NCAA Tournament. Baylor won the 2019 national championship and only 20 teams made fewer 3-pointers than the Bears did. Notre Dame, which fell to Baylor in the championship game, ranked 168th in made 3-pointers. Final Four qualifiers Oregon and UConn, however, both were ranked among the top 13 3-point shooting teams.

The Longhorns don’t expect 3-point shooting to be the foundation of this year’s team. But they do know that an improved performance from beyond the arc will be an asset.

“I hope we don’t live and die by it,” Allen-Taylor said. “I think it’s good to make shots, but other things are going to open up as well if we continue to hit those shots.”

Texas’ notable number: Icing the opposing kicker under Tom Herman — and the number 2