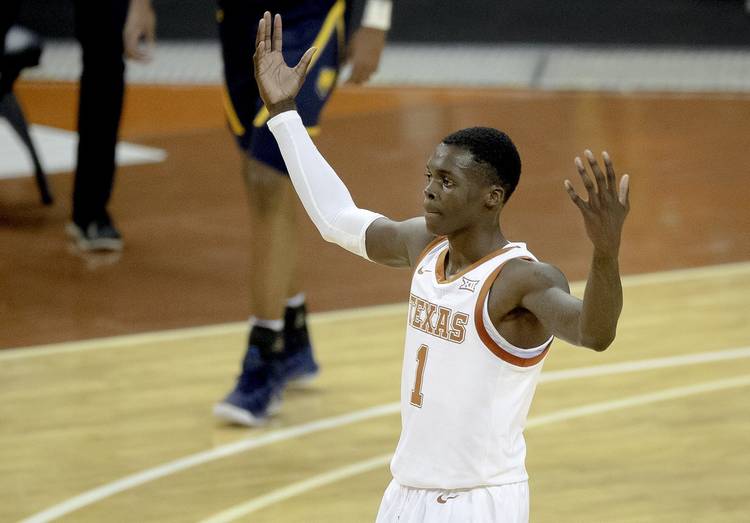 Here 12 big things about Big 12 basketball for the first few days of the regular season.

Real and not real:

No. 16-ranked Baylor lost a returning starter in late September when Mario Kegler was suspended and then decided to leave the team.

Some thought it would be a significant loss for the Bears, but I think it made life easier for Baylor coach Scott Drew when it comes to deciding his rotation. Drew told reporter Andy Katz: “The strength of our team is our depth. It hurts whenever you lose somebody, but it’s a blessing to have depth. People said we had eight starters. Now we have seven.”

In the opening game of the season, Drew’s terrific problem stayed complicated when Devonte Bandoo scored 15 points, potentially giving the Bears an even deeper backcourt than I already expected.

The guards were always the strength of Baylor, even if the return of Tristan Clark was the preseason story. Baylor’s guards combined for 78 points in the 105-61 win over Central Arkansas on Tuesday. Having another scorer like Bandoo will mitigate any loss Kegler, who averaged 10.5 points and 5.8 rebounds, brought on the offensive end.

The true big story from the first game was Jared Butler, a guard I already thought had all-league potential, scoring 30 points and shooting 8-for-12 from 3-point range. Mark Vital, who I had as my third-best player in the league, didn’t start, played 19 minutes, scored six points, grabbed five rebounds and nearly fouled out.

But I’ll Stan for Vital, as fellow millennials say, and believe he’ll be a major factor in Baylor’s success this season.

Clark’s return from injury was quiet, as he played 16 minutes and scored three points while also nearly fouling out.

The strength of Baylor is the guards.

Which could suck for Kansas because…

11. Not real: Kansas should panic after that flop opener

Kansas was on its way to a 5-point loss in the final seconds of the Champions Classic matchup with Duke at Madison Square Garden until Devon Dotson banked in a 3-pointer at the buzzer to make it a 68-66 loss. But it looked uglier than that.

Still, whether it was Duke’s defense or Kansas’ sloppiness, the Jayhawks committed a baffling 29 turnovers in the loss– many of which were not the result of Duke’s tenacious defense.

Kansas fans should probably take the thumb off the panic button.

The Jayhawks committed nearly 30 turnovers against the No. 4-ranked, soon to be No.2-ranked, team in the nation and still held the largest lead of the game for a time, nine points, and still had the lead during the final few minutes.

Oh, and it was the first game of the season with Kansas missing a key 3-point threat, Iowa graduate transfer Isaiah Moss, who was out after missing most of the preseason with a hamstring injury. Statistically, Kansas shot better (46% to 35%), outrebounded (40 to 30) and outscored Duke in the paint (38 to 28)

There are plenty of things to hate about the opener, but a lot of the issues I saw were issues you see early in the season: timing and flow. Kansas is going to try to play with two centers. As much as Bill Self will try to tell us sophomore David McCormick is a forward, he sure looks like a center and he struggled to defend on the outside. You wonder if the return of Moss, who did play in the final exhibition, will mean a four-guard lineup is coming.

If Kansas is committing 29 turnovers in a game by the time the Maui Invitation arrives later this month, feel free to press “panic.”

Let’s travel back in time before Andrew Jones’ leukemia diagnosis in December 2017 and remember that he was a McDonald’s All-American and a guard who tested his NBA Draft stock.

After two years of battling for his life, which can’t be said loudly enough, Jones returned to the court and put up career highs against Northern Colorado.

Texas fans should absolutely not delve too deep into a 24-point win over a team from the Big Sky Conference (they did win 21 games last season), but if that’s the contribution Jones is going to provide, things change for Texas’ outlook. If this is what Jones is, and few outside of the Texas locker room could have envisioned his season-opening performance, than Texas now has another capable 3-point threat, another dynamic guard and even deeper roster.

Texas already had a roster that could make a run at the Big 12 title, now its been fortified even if Jones’ season averages wind up being half of what he did on the opening night of play (20 points, 4-for-5 from 3-point in 29 minutes).

9. Not real: The debate for best conference is over, it’s going to be the Big 12

I don’t think anyone is saying this yet, but Kansas’ loss to Duke and the rest of the league playing mid-majors means we’re nowhere near knowing how good this conference is. I even saw prognosticator predict the league will send all 10 teams to the tournament, but perhaps we wait until these teams get tested.

Tyrese Haliburton is Iowa State’s best player and his season debut did little to douse any hype.

He was three rebounds away from a triple-double with 12 points, 14 assists, six steals and seven rebounds in 31 minutes. He had a 14-3 assists-to-turnover ratio. There’s no doubt Haliburton is a star and any doubt I had about him adjusting to a newish role as the lead guard– it’s why I had him at No. 13 in my player rankings— were obliterated even if it was against Mississippi Valley State, a team that went 6-26 in the SWAC last season.

Still, I think back to last season and remember the main takeaway I had: Everytime Nebraska transfer forward Michael Jacobson played well and was a factor, Iowa State won and played its best basketball.

Jacobson, now a senior who averaged 11.1 points and started every game for ISU in 2018-2019, scored 20 points in the opener and grabbed nine rebounds while committing only two personal fouls. He was 3-for-5 from 3-point range and missed only five shots on the night. He did it all in only 22 minutes.

The rest of the stats, including Haliburton’s, I can toss away because MVSTU is probably still bad, but Jacobson being featured offensively this season when he’s on the court is a real sign that Iowa State could be much, much better than I and others predicted. Then again, we shouldn’t ignore ISU allowing 74 points in the opening, even if 41 came in the second half of a blow out.

Also, though these players weren’t expected to play much, Iowa State lost half of its recruiting class a day before the season started.

We really won’t know anything about ISU until it plays Oregon State on Saturday and even then we won’t really know until the Battle 4 Atlantis tournament later this month.

One of the best and arguably most valuable freshmen to his team in the league, Harmon scored 23 points and played 33 minutes in OU’s 85-67 win over UTSA, a game in which the Sooners were without Kristian Doolittle, who was suspended for playing in an unapproved summer league game. Harmon was needed as the game was tied at 36 at halftime.

Wichita State transfer Austin Reeves, who played 36 minutes, also scored 23 points, but was way more inefficient than Harmon, shooting 9-for-20 and just 1-for-8 from 3-point.

Harmon didn’t have an assist in the game, which is concerning, but probably not as concerning as Jamal Bieniemy scoring only two points in 22 minutes.

Eastern Illinois was 14-18 last season in the Ohio Valley Conference, so it’s important not to get too excited about the opening night performance, but Ramsey is expected to replace a lot of firepower Tech lost when Jarrett Culver went to the NBA, so Red Raider fans can get excited about him scoring 19, leading all players, and grabbing five rebounds.

Head coach Mike Boynton hired Cannen Cunningham to his staff this offseason. In a vacuum it was crazy hire because Cunningham, a former player at SMU, was coaching middle school basketball a few years ago but was now available after having worked for Mike Dunleavy  Sr.’s staff at Tulane last year.

It helps when your younger brother Cade is the No. 2-rated recruit in the country. And while all we had heard from Cade Cunningham since his brother took the Oklahoma State job was how it wasn’t a lock he was going to be a Cowboy, it turns out he’s going to be a Cowboy next season.

Cunningham committed to OSU on Tuesday.

It helps Boynton immensely that the highest-rated recruit to every commit to OSU in the modern recruiting era is coming next season. It means that even if OSU missed the tournament for the third time in three seasons under Boynton, the coach has a pretty good excuse for why he should get year four.

That said, Boynton should have a pretty good team this season, and the Cowboys got by Oral Roberts 80-75 on Wednesday.

This little Big 12 recap is publishing every Thursday, so we’ll have an update before this game tips off next week, but “The Backyard Brawl” used to be one of the most heated rivalries along the East Coast before the two programs changed conferences. But it is coming back in football!

The football team plays Texas at 2:30 p.m., so Wildcat fans are probably going to miss the second game of the season. Of all of the season debuts, K-State’s 13-point win over a good mid-major North Dakota State team was the most interesting. Their in-state counter part obviously had the most concerning and toughest opener, but it was against Duke on a neutral court.

Kansas State trailing 22-21 in Manhattan at halftime as junior guard Cartier Diarra needed 21 shots to score 23 points is not great. Traveling to a rebuilding UNLV team coached by former South Dakota State coach and Iowa State assistant T.J. Otzelberger could be a stiff test for the Wildcast.

Unfortunately for Lon Kruger and Oklahoma basketball fans, no one who loves OU athletics is likely to be watching this early November game with the No. 9 Oklahoma football team hosting a good Iowa State team at the same exact time.

Perhaps they can switch over at halftime? Watch the game on mute on the little TV?

Based on Oklahoma’s struggles against UTSA, the Minnesota game should be intriguing.

This was the No. 1 game until Texas’ season-opening performance. Washington is essentially ranked No. 26 in the AP poll, having received 164 votes and just missing the preseason top 25.

This should be a pretty neutral court, but if locals from Anchorage come out and it’s not all military personnel, there’s a chance Washington could have more support.

The Huskies run the Syracuse zone defense and Baylor has a guard who made eight 3-pointers in the last game, so I’m giving the edge to Baylor in this one.

As soon as the football game is over, Texas fans can flip over to FS1 for the basketball team’s biggest for-sure test of the non-conference slate.

Purdue is ranked and beat Green Bay 79-57 on Wednesday.

Texas beating Northern Colorado at home is one thing, but we’ll learn way more about the Longhorns after this game. At this point it would be a stretch to faithfully predict the matchup, but Texas should get it’s first real test in the paint against 7-foot-3-inch Matt Haarms and rest of Purdue’s typically large team.

After $130 million gift, the University of Texas to name new basketball arena for Moody family