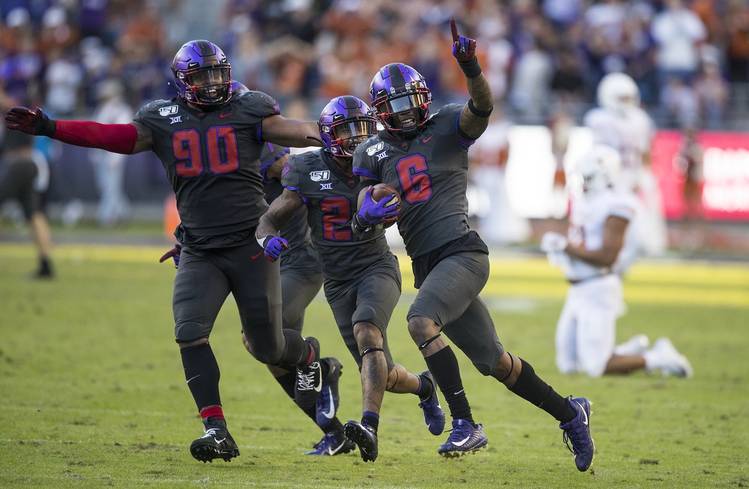 Like Tom Herman said this week, Texas is a team on the ropes.

“You can do one of two things,” Herman said Monday. “You can fight your way off the ropes or you can tell your trainer to throw in the towel.”

Saturday’s four-quarter brawl against No. 20 Kansas State (6-2, 3-2 Big 12) is a defining moment in the 2019 season. It’s a true fork in the road for Herman, his coaching staff and the program as a whole.

Win, and it takes the sting out of losing to TCU and gives UT momentum going into two big road games at Iowa State and Baylor. Lose, and the rest of the month becomes an academic exercise in second-tier bowl positioning. Most, if not all, of the momentum generated in 2018 would be gone.

Texas (5-3, 3-2) is coming off a bye week, meaning the Horns had extra time to prepare for this must-win situation. The Horns will welcome back a slew of healthy players, including defensive backs Caden Sterns, B.J. Foster and DeMarvion Overshown.

“Everything that we’re still looking forward to is still out there,” defensive end Malcolm Roach said. “We’re just taking it one game at a time. Continue to work hard. Continue to try to lead this team and go 1-0 every week.”

The Longhorns find themselves in such a precarious place in part because of their inability to close out games. And UT’s sagging defense is not all to blame, either.

Fourth-quarter inconsistency was a major issue last season, too. The Horns were outscored 148-66 in the fourth quarter. This year, the late scoring disparity is not as great (118-106) but the Horns are still on the wrong end.

This team struggles closing the door. In eight games, Texas has allowed an average of 146 total yards per game in the fourth quarter, an absurdly high number that ESPN Stats calculated as the highest in the nation.

Oklahoma racked up 14 points and 158 yards in the fourth. Kansas made things interesting by completing 10 of 18 passes with two touchdowns. TCU put away its victory by holding the ball 9 minutes, 16 seconds in the final stanza.

The fourth quarter is typically when teams run the ball and work the clock. Texas hasn’t been doing that. The last two games, the Horns had only 42 rushing yards (Kansas) and 41 yards (TCU) in the fourth quarter. Texas is 17-for-30 (56.7%) on third downs in the fourth quarter, but opponents are not too far behind, going 15-for-31 (48.4%). Opponents have the sacks edge, 7-3, in the final 15 minutes, according to SportSource Analytics.

These numbers don’t reflect poorly on the team’s conditioning or depth. It’s about execution at winning time.

Asked why Texas is struggling in the fourth quarter, defensive tackle Keondre Coburn said, “I wish I knew. As a team, I guess we just have to execute it better. They give us a guideline and give us a plan. It’s just as players, we’ve got to execute better.”

This team has started slow each game but typically found its footing before halftime. For example, Texas is outscoring opponents 45-26 in the first quarter and 100-68 in the second. Things begin to drift as the game continues, though.

Opponents have thrown 11 touchdown passes in the fourth quarter compared to Texas’ four. Along the way, opponents have 17 passing plays go 15 yards or more. Texas has 12, according to SportSource data.

Herman is hopeful his players understand they still can reach the Big 12 championship game. The Horns likely need to win their final four regular-season games and hope Oklahoma can beat Baylor.

Few outside the Midwest are looking at Kansas State as a serious Big 12 threat. That’s a mistake. First-year coach Chris Klieman, who won four FCS national titles at North Dakota State, is molding K-State in the same manner as legendary lion Bill Snyder did.

“I just think our guys are getting better as the weeks have gone on,” Klieman told reporters this week.

Kansas State’s 48-41 win over then-No. 5 Oklahoma was no fluke. The Sooners made a frantic push near the finish line and nearly gobbled up a last-minute onside kick. But K-State prevailed and then followed it with a 38-10 pasting of rival Kansas.

At North Dakota State, Klieman’s teams were known for being strong in November.

The Longhorns are glad to see their depth improve this week. Sterns, Foster and Overshown will boost a secondary that still ranks 10th in the Big 12. Texas is still the only team allowing more than 300 passing yards per game.

Klieman lets a small army carry the football. James Gilbert is their primary rushing threat with 558 yards and five touchdowns. Thompson, like UT’s Sam Ehlinger, will take it himself when K-State is close; Thompson has 10 rushing touchdowns.

The Texas defense allowed 444.3 yards per game in September. That number rose to 494.5 in October. Anything higher this month would be stratospheric.

Saturday’s matchup feels titanic, even though it’s a battle of two teams currently off the national radar.

“I don’t know what their psyche is as a team,” Herman said of K-State, “but I do know that they’re playing really, really well in all facets right now.”