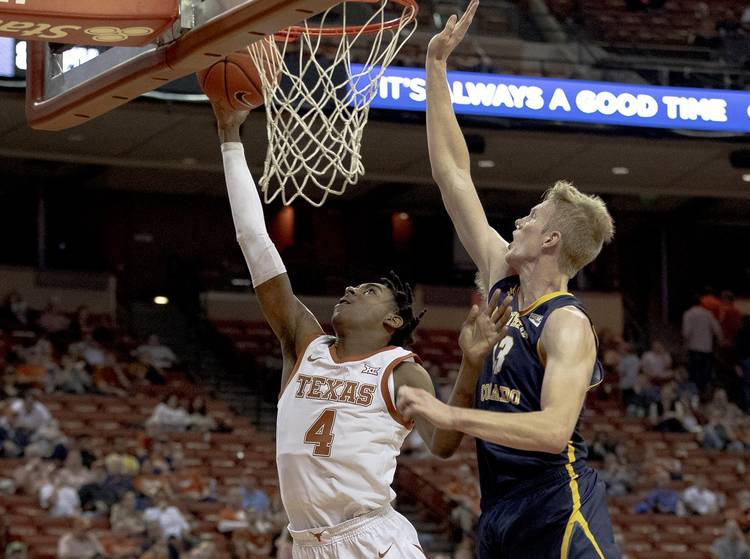 “I call him ‘Microwave’ in practice,” Coleman said. “He can score on all three levels and very confident. When he walked in the gym from day one, he’s gonna let you know this is why I’m here and I’m going to do this from day one.”

Williams was heating things up in Texas’ season-opening victory over Northern Colorado. Making his Longhorns debut, the 6-6 guard had eight points and one block in 17 minutes.

That’s the kind of heat Texas (1-0) needs Saturday during a trip to No. 23 Purdue. It’s the program’s first sojourn to Mackey Arena in West Lafayette, Ind., a place where the Boilermakers (1-0) have won 18 straight.

Men’s preview: Texas at No. 23 Purdue

Asked if he expected to play that much Tuesday, Williams said, “Um, I honestly didn’t know. But as a basketball player, when you’re not starting, you’re always ready whenever you’re called. So when he called my name off the bench, I hopped up and I ran to the table.”

Williams is no stranger to major college basketball. His older sister, Kelsey Bone, was once one of the nation’s most wanted recruits. Bone played at South Carolina and Texas A&M and became a first-round pick in the WNBA.

At Fort Bend Elkins, he averaged 18.2 points as a senior and led the team to a 31-8 record last season. He shot 55% from the floor, a rather spectacular number at any level.

Coach Shaka Smart would love if the “Microwave” caught fire for the Longhorns.

“He was not scared at all. He was not overwhelmed,” Smart said. “I think we had some other guys that had some real jitters. Didn’t really see that in him.”

UT’s other two freshmen did look like newbies, though. Center Will Baker was 0-for-3 shooting from 3-point range, 0-for-4 overall and had two rebounds in 10 minutes. Forward Kai Jones was 0-for-1 and had one block in five minutes. Redshirt freshman Brock Cunningham also was 0-for-3 beyond the arc and had two turnovers in 10 minutes. It was his debut performance in burnt orange, too.

“For me, a big game, a regular game, any game is just another game to me,” Williams said. “Yeah, they actually thought I was kind of weird going to go into the game … I just wasn’t very nervous. They asked, ‘Are you nervous? Are you nervous?’ Nah, I’m just trying to keep my keep my nerves in check.”

The Horns actually need all four youngsters to contribute, especially with defense and rebounding. Forwards Jericho Sims and Gerald Liddell still have yet to play big minutes consistently in their careers.

Williams is just finding his way at the moment. But he’s eager to help.

“I really liked his mindset,” Smart said. “We told him if you prepare the right way over the last couple practices going into the game and shoot-around, then you’re going to get opportunity to play, and he did that. So he deserves a lot of credit for earning that for himself.”