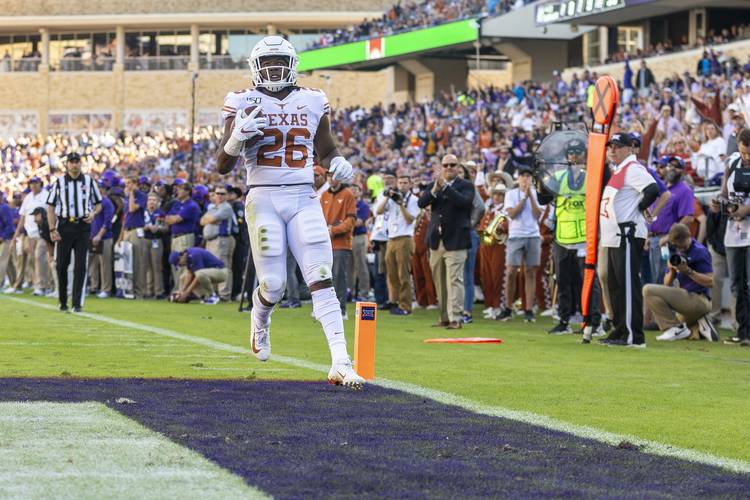 Texas running back Keaontay Ingram (26) scores a touchdown against TCU in Fort Worth, on Oct., 26, 2019. [Stephen Spillman for Statesman]

Five key matchups in the Texas-Kansas State game to keep your eye on Saturday:

Kansas State entered this season without a single non-quarterback who had recorded a rushing attempt for the Wildcats in 2018. Enter Gilbert, a graduate transfer from Ball State who has scored five times and is averaging 5.6 yards per carry. Gilbert was held out of last week’s game against Kansas, but he recently told reporters that he expects to play against Texas. In the opposing backfield will be Ingram, who leads Texas in rushing attempts (98), yards (494) and 100-yard games (two). Ingram has also run for four scores and caught a touchdown pass.

Kansas State has allowed only four touchdown passes. One of those touchdowns was caught by a tight end and the other three were hauled in by receivers who lined up on the outside. That sets up an interesting match-up with UT’s slot receivers since Duvernay’s 69 receptions, 800 receiving yards and seven touchdown catches are all team-highs. Duvernay’s back-up, freshman Jake Smith, has scored five times and is averaging 10.4 yards over his 20 catches.  McPherson, Kansas State’s junior nickelback, has 22 tackles and an interception this year.

Reggie Walker was the only Wildcat voted onto the Big 12’s preseason team but it has been another defensive end who has led the way in the trenches. With four sacks, Hubert leads the team in that statistical category. The 6-3, 258-pound Hubert will likely see a lot of the 6-7, 300-pound Cosmi, UT’s left tackle, on Saturday. UT is allowing a Big 12-high 2.88 sacks per game, but coaches have given Cosmi a championship grade for the majority of UT’s games. In addition to blocking, Cosmi has also scored on a 12-yard touchdown run this fall.

With -12 yards on nine tries, the Longhorns are still the only FBS team that is averaging negative yardage on its punt returns. The Longhorns, though, did get a boost in last year’s game against Kansas State when D’Shawn Jamison returned a punt 90 yards for a touchdown. Jamison hasn’t recorded a punt return during his sophomore season but he is listed as an option on the depth chart beside Smith and senior Brandon Jones. Anctil leads the Big 12 with his average of 45.0 yards per punt and he is on the Ray Guy Award’s watch list.

This weekend will serve as a reunion between Malone and Giles, who are both ex-Longhorn defenders who were teammates on UT’s 1989 and 1990 teams. Malone currently coaches the Wildcats’ cornerbacks and Kansas State boasts the Big 12’s best pass defense (186.3 yards per game). The Texas run defense has had its moments this season and currently ranks 63rd nationally (160.1 yards per game). The defensive linemen coached by Giles, however, have combined for only three sacks this season.