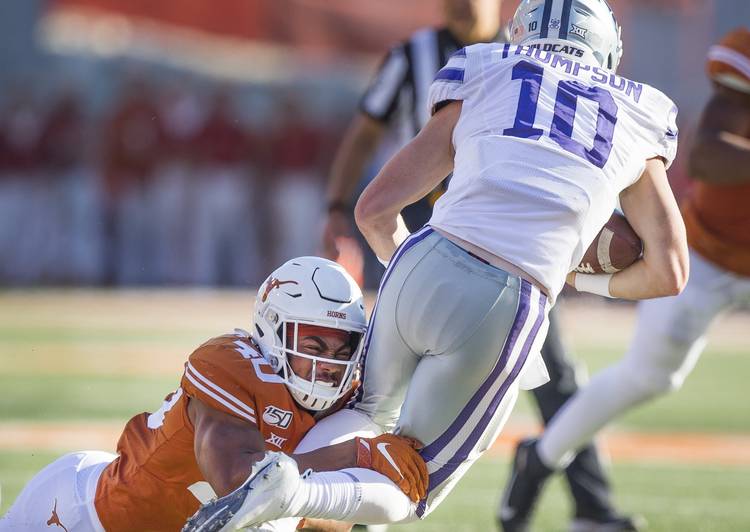 Revisiting our five pregame questions that were facing the Longhorns ahead of Saturday’s Kansas State game. How they played out:

1. Did Brennan Eagles make up for last game’s suspension?

The sophomore wide receiver, who was suspended for the TCU game because he had missed a team practice, was pretty much a non-factor — two catches for 21 yards. Actually, when you look at his season’s work, six of the seven games he’s played, he’s finished with three or fewer receptions. Still, he’s caught five touchdowns and led the team in average yards per catch (19.3) heading into Saturday. The Wildcats had allowed only four passing touchdowns all season.

2. Which Longhorn coming off the injury report had the biggest game?

Texas’ nickel back had only three tackles, but one of them was one of the bigger licks a Longhorn delivered and he also contributed a key half-sack on third down that forced a second-half punt and also a key pass breakup that forced another KSU punt. Caden Sterns, who was leading the team in tackles before he went down with a knee injury against Oklahoma State. Freshman running back Jordan Whittington could have played, but was never inserted. DeMarvion Overshown didn’t play, either. Neither did Jeffrey McCulloch.

3. Did Texas keep Skylar Thompson out of the end zone?

Thompson, a junior, had thrown seven touchdowns but it was his 10 scoring runs that ranked fourth in the country among quarterbacks. But the Longhorns shut him out of the end zone; Texas, in fact, has allowed only four rushing touchdowns by opposing quarterbacks all season. Oklahoma’s Jalen Hurts and Oklahoma State’s Spencer Sanders both topped 100 rushing yards. Thompson ran it seven times and finished with 0 net yards.

4. How did punt plays fare with a new punter?

Chris Naggar, a junior non-scholarship player and Ryan Bujcevski’s backup, averaged 43.7 yards on his three kicks. Bujcevski, who’s out with a broken collarbone suffered in the TCU loss, was averaging 41.4 yards per punt, which ranked in the middle of the Big 12. Naggar walked on to the team in 2016 but didn’t earn his first official game appearance until this season. He once was an all-state punter at Arlington High. He had a 54-yard punt at TCU.

5. Did the Longhorns finally knock off a ranked team?