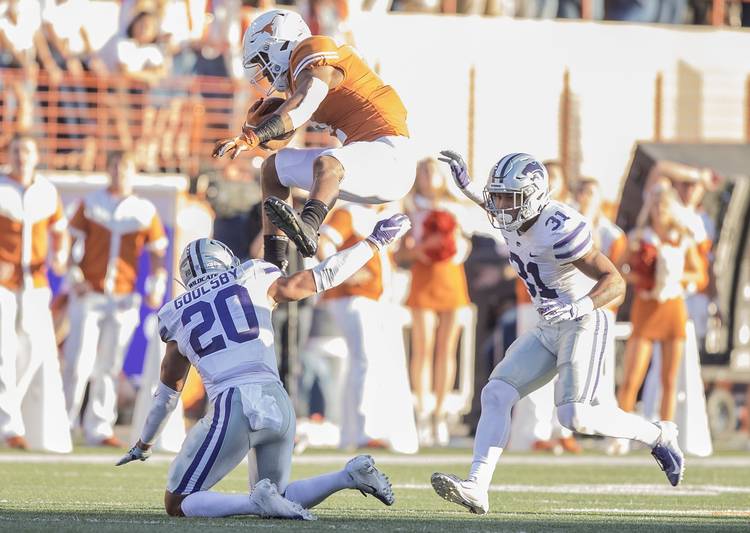 Forget “The Eyes of Texas.” The Longhorns’ new anthem might as well be “Don’t Stop Believin.’”

But Steve Perry’s sentiment still rings true, and thousands of Texas fans were happy — and no doubt relieved — to hold up their cell phones and sing along at dusk after Saturday’s 27-24 win over No. 16 Kansas State.

Cameron Dicker, the kicker, drilled a 26-yard field goal as time expired. It was his second last-second, game-winner in the last three games, cementing the fact this program does nothing easy.

Indeed, don’t stop believing in these Longhorns, a 6-3 bunch that still has an outside shot at reaching the Big 12 championship game. Granted, with a 4-2 Big 12 record, they need help. But Texas now has some positive thrust heading into a major road game at Iowa State next weekend. And if nothing else, Texas is now bowl-eligible.

“Fantastic team win,” Herman said. Then, he blasted “all the misinformation out there” about perceived internal strife that’s reported via “fifth-hand information.”

“We knew what we signed up for when we came to Texas,” Herman said. “The fans have very high expectations, as they should. We do, too. We know the pulse of the team, we know those guys in that locker room really, really do a great job playing for each other.”

It’s miserable around Moncrief after any loss. But Texas lost to TCU on Oct. 26 and then had to stew for two weeks, as the club idled last weekend. Veterans took it upon themselves to police the locker room and make sure they were ready for the Wildcats (6-3, 3-3 Big 12).

“My sense of urgency is at an all-time high,” defensive end Malcolm Roach said. “Not getting the W against TCU, that left a bad taste in your mouth, and I feel like everyone in the locker room as a high sense of urgency.”

On a picturesque day, K-State came out and torched the worst Texas defense in school history, getting two touchdowns with relative ease. The Wildcats started the game 5-for-6 on third downs. But the Horns buckled down, forced a punt or fumble on six straight defensive possessions and it was tied 24-24 with 6:45 remaining.

This wasn’t exactly a two-minute drill situation. Keep-away requires skill and patience. Quarterback Sam Ehlinger connected with Devin Duvernay on two pass plays for 18 yards each. Then Keaontay Ingram polished off his career-best day with a nine-yard run to the Wildcats’ 4-yard line.

Ehlinger helped run off some clock, then Herman sent out Dicker for the game-winner. The Lake Travis product had showed up at the stadium Saturday with his shirt unbuttoned, tie askew and looking like the post-game party started early.

Dicker earned a proper tsk-tsk on social media for his slovenly look, but most was forgiven after he threaded the needle with his foot. He had missed a 55-yarder in the first half but also connected from 36 with 9:02 left in the third quarter.

“That’s my weekly thing,” Dicker said. “After Bevo Boulevard, I walk through, do everything and as I go past everybody and walk up the ramp where nobody else can see me — I thought, except Longhorn Network, I guess — I just start unbuttoning and leave my tie loose so I can get in the locker room, change and go warm up.”

Dicker’s state of undress looked like a metaphor created out of whole, unbuttoned cloth. “I think everybody was kind of ready to go,” he said.

Defensive coordinator Todd Orlando will get some reprieve, too, for the way his unit finished the game. It was an eye-sore initially. K-State’s Malik Knowles caught a pass in the open field, juked UT’s Brandon Jones and raced 70 yards for the game’s first score. Wykeen Gill then caught a 19-yard pass as K-State took a stunning 14-0 lead.

The next Wildcats’ drive went 21 yards before they punted it away. Jones made up for getting burned by forcing a fumble. The senior would later have a critical 53-yard punt return, pushing Texas into positive territory for the season. UT had been the only school in the country with negative punt return yardage (minus-12 before Saturday).

The Longhorns wouldn’t allow another third-down conversion the rest of the day. K-State finished the game 5-for-11. Quarterback Skylar Thompson threw for 217 yards in the first half and only 36 after the break.

Once the Texas defense stiffened, the offense went to work.

Asked to describe the mood the last two weeks, Ingram said, “Nasty. Ready to get back out there. Ready to complete and ready to get home on the football field.”

Ingram appeared to put it away with a terrific 12-yard run where he bounced out wide in traffic and rushed in. Ingram finished with a new career-high 139 yards on 16 carries. But Joshua Youngblood took the ensuing kickoff 98 yards, cutting UT’s 10-point lead down to three, and the Horns had to keep swinging.

They’ve got to keep doing it the rest of the month, too.

“We’re going to fight all four quarters,” Ingram said. “That’s what this team stands for.”