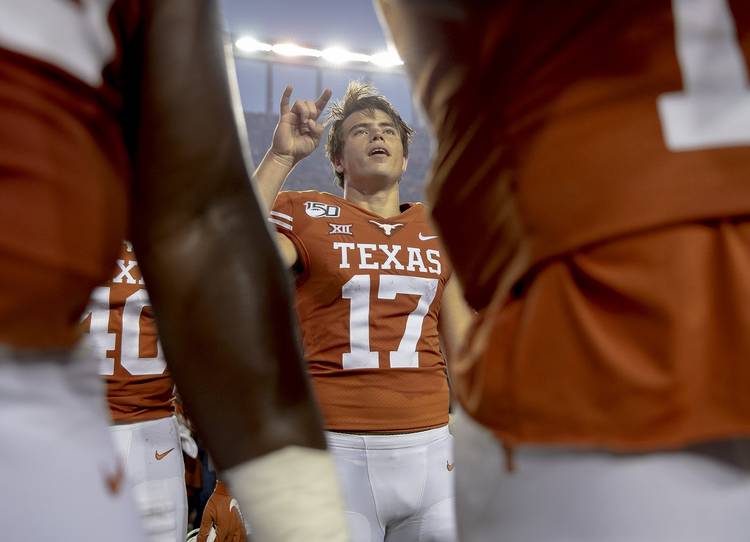 Texas kicker Cameron Dicker stands for the playing of "The Eyes of Texas" after kicking the winning field goal in a 27-24 victory over Kansas State on Saturday. [NICK WAGNER/AMERICAN-STATESMAN]

There were 118 snaps taken in Texas’ 27-24 win over No. 16 Kansas State on Saturday. Here are five that ended up making a big difference:

Knowles, a 6-foot-2 receiver who had lined up in the backfield, streaked 70 yards to the Texas end zone. He eluded a tackle attempt by Texas safety Brandon Jones on the play.

In Todd Orlando’s 36 games as UT’s defensive coordinator, Kansas State is responsible for two of the four longest gains against the Longhorns. The longest occurred two years ago when Wildcat receiver Dalton Schoen caught an 82-yard touchdown pass in Austin.

At his press conference last Monday, Texas coach Tom Herman was asked for a guarantee that the Longhorns would run a trick play against the Wildcats. Herman wouldn’t give a guarantee, but the Longhorns did dip into their bag of tricks a few days later. Down 14-0 in the second quarter, Texas ran a flea-flicker, and quarterback Sam Ehlinger found Collin Johnson for a 21-yard score.

It was the second time this season that UT had scored on a flea-flicker.

The touchdown catch was Johnson’s first since UT’s season opener against Louisiana Tech. Johnson has now caught 14 TD passes in his career. He is tied for 10th in the Texas record books with teammate Devin Duvernay and former Longhorns Wane McGarity and Johnny “Lam” Jones.

Kansas State tied the game with 6 minutes, 45 seconds remaining, but the Wildcats never touched the football again. Texas set up a game-ending field goal by Cameron Dicker with a 13-play, 67-yard drive. Perhaps the biggest play of the possession was an 18-yard catch by Duvernay on a third-and-14 that took Texas to the Kansas State 34.

“We pressured and they picked it up, and their receiver got open and quarterback delivered him the ball and, shoot, they made a play,” Kansas State coach Chris Klieman said.

Successful at a rate of 54.1%, Texas entered the game ranked third nationally in third-down conversions. Kansas State, though, had the nation’s second-best third-down defense (24.7%). On Saturday, Texas converted four of its 11 third downs.

With Texas facing a second down at the Kansas State 1 with 1:32 left, the Wildcats used their final timeout. Instead of scoring, Texas opted to run plays that would kill the clock. That tactic set Dicker up for some buzzer-beating heroics.

On a third-down play, the players actually persuaded Herman to go for a touchdown. Ehlinger scored on a 3-yard run, but that play was negated by an illegal formation penalty. Texas would have gone up by six or seven points had the touchdown counted, but Kansas State would have gotten the football back with 39 seconds left. Texas went back to its original plan after the penalty, and the clock was run down to 3 seconds after a no-gain run by Ehlinger.

Said Ehlinger after the game: “As bad as we all wanted to score to cap off that drive, the smart thing was to set up the field goal and not allow them to get back on the field.”

With the game on the line, Dicker calmly nailed a 26-yard field goal. The play featured a good hold from junior Chris Naggar, who hadn’t practiced that duty much until both Ryan Bujcevski and Cade Brewer were injured two weeks ago.

The kick was just the latest highlight for the sophomore from Lake Travis. Last year, Dicker kicked a 40-yard field goal with nine seconds left in a 48-45 win over rival Oklahoma. Dicker’s 57-yard field goal in September is tied for the seventh-longest kick in school history. Dicker is also responsible for two of the eight field goals that have won a game for Texas on the final play of regulation.

According to UT, the program’s only other win that was secured on the final play of regulation occurred on Oct. 17, 1987. In a 16-14 win over No. 15 Arkansas, Brett Stafford threw an 18-yard touchdown pass to Tony Jones on the game’s final play.

Texas’ Tom Herman on defensive rebound vs. Kansas State: ‘We did our jobs’