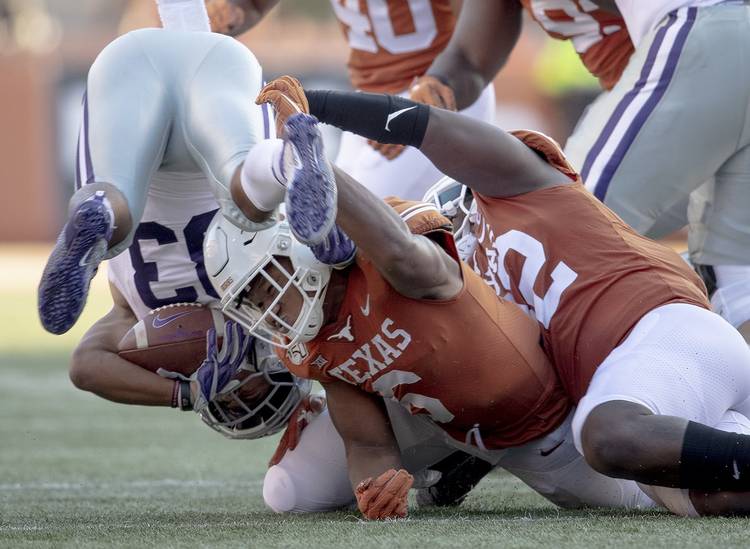 Texas fans, your eyes were not deceiving you. Catch anyone who faints. Yes, the Longhorns started against Kansas State with four defensive linemen.

Malcolm Roach, Keondre Coburn, Moro Ojomo and Ta’Quon Graham were all on the field for the first play from scrimmage Saturday. The result was a harmless 1-yard gain. On second and third down, UT was back to a three-man front.

On third-and-5, K-State’s Malik Knowles dodged a tackle and went 70 yards for a touchdown.

Still, defensive coordinator Todd Orlando stuck to his philosophy, stayed true to his blitz-first, blitz-always mindset, and the Longhorns eventually put the clamps on the Wildcats in a 27-24 win. Now Orlando’s crew needs to build on that momentum Saturday at Iowa State (5-4, 3-3 Big 12).

The Longhorns (6-3, 4-2 Big 12) got back into the Associated Press Top 25 poll this week at No. 22. Texas was not listed in the initial College Football Playoff rankings. Those will be updated Tuesday.

“They have got really good defensive linemen and linebackers that I thought hit their fits really well and caused us some problems,” Kansas State coach Chris Klieman said.

The Wildcats jumped out to a quick 14-0 lead thanks in part to their success on third down. In addition to Knowles’ score, K-State’s Dalton Schoen had catches of 21 and 14 yards on third-down plays.

The Wildcats were forced to punt on their third drive after an offensive pass interference call. UT’s Brandon Jones, who missed the tackle on Knowles, made a terrific play to force a fumble on K-State’s fourth possession. Texas’ defense then forced four straight punts.

K-State’s Blake Lynch tied things up with a 45-yard field goal with 6 minutes, 45 seconds remaining. Texas ate up the rest of the clock, and Cameron Dicker drilled a 26-yard field goal at the horn to win it.

“I’d like to say it was some magic defense that we called. It wasn’t,” Texas coach Tom Herman said. “We played better on first and second down to make those third downs a lot longer. We executed at a much higher level. We did our jobs.”

Kansas State had 246 total yards by halftime but only 58 after the break. Klieman’s bunch ran roughshod over Oklahoma but had only 51 rushing yards against Texas.

The visitors started 5-for-6 on third down but were 0-for-5 after that.

Jones finished with a team-high six tackles. Linebacker Joseph Ossai had five tackles and two quarterback hurries. Graham and B.J. Foster combined on a sack, and Ayodele Adeoye and T’Vondre Sweat each had his own sack.

It should be pointed out that Kansas State came into Royal-Memorial Stadium with the second-lowest average offensive output of any Big 12 school. K-State’s success was mostly in playing keep-away; the Wildcats rank fifth nationally in time of possession.

But that probably didn’t matter to the happy Texas fan base or in Sunday’s film session.

Orlando made it clear Wednesday that he wasn’t going to overhaul the defensive scheme this late in the season, if at all. Putting an extra defensive lineman on the field in an obvious running situation against a run-oriented team is not acquiescing to disgruntled fans. It’s just smart strategy.

“My experience with things has been to get better at what you’re doing,” Orlando said Wednesday during his weekly meeting with reporters. He said it’s wrong to correct players for what happened in a loss to TCU and then change the entire scheme for Kansas State.

Saturday was Exhibit A. The Longhorns actually moved up a notch in the Big 12 rankings, too. Texas’ pass defense is ninth instead of 10th; Texas Tech now occupies the basement. UT also sits eighth in total defense, allowing an average of 447.6 yards per game.

For now, the fever appears to be subsiding.

“We played better technique,” Herman said. “We mixed the coverages up really well, and we did our job. We played our assignments much, much better than we have in the last few weeks.”

Texas has no time for respite. The Longhorns must win their final three regular-season games to have a chance at a spot in the Big 12 championship.

Iowa State nearly pulled off a wild comeback at Oklahoma on Saturday but lost 42-41 on a failed two-point conversion.

“We’re just not that team that’s going to be able to play three quarters or 2½ quarters and win football games,” Iowa State coach Matt Campbell told reporters. “Our key to success is playing four quarters, and obviously we didn’t do that tonight, and it caught up to us again.”

Texas has a 14-2 lead in the all-time series against Iowa State. The Horns lost in Ames in 2015 on a dreary Halloween night. UT has won the last three, all by double digits.

“We know we’ve got to go on the road this week and continue to try to get off the ropes,” Herman said. “But doing it with this level of confidence helps.”