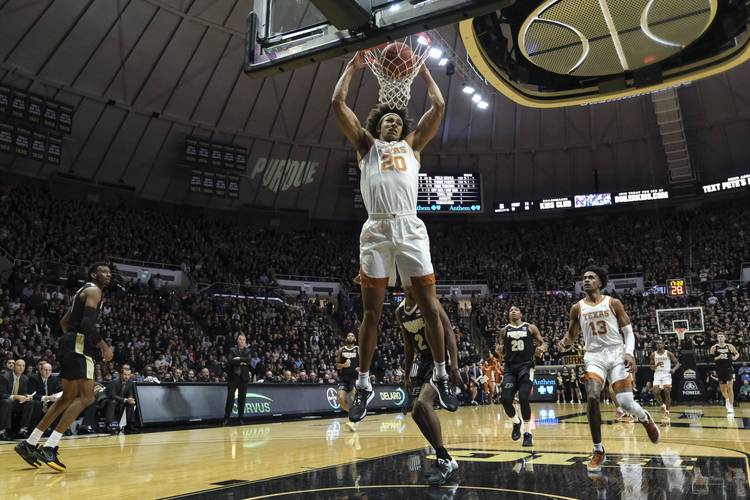 Texas forward Jericho Sims (20) completes a break away dunk against Purdue in the first half of an NCAA college basketball game in West Lafayette, Ind., Saturday, Nov. 9, 2019. (AP Photo/AJ Mast)

If anything, he was subdued Monday, two days after the coach’s first non-conference win over a ranked opponent in a true road environment at UT.

“It’s a great win, and the way college basketball works, it’s a win that will help us in March,” Smart said. “But at the same time, it was just one win.”

Texas is a perky 2-0 after wins over Northern Colorado and Purdue. On paper, the Horns are favored to win their next two against California Baptist (Tuesday) and Prairie View A&M (Friday).

It’s just the kind of start Smart and the Longhorns needed this season after winning the NIT. Texas is riding a seven-game winning streak dating back to last season. The Horns rightfully feel good about where they’re headed.

Virginia, the NCAA national champion, has an eight-game streak, but who’s counting?

“For us it’s our second week of the season, and we simply want to get better from week one to week two,” Smart said.

Courtney Ramey did all the heavy lifting against Northern Colorado, getting 16 points and 10 rebounds. Matt Coleman III took over against Purdue, pouring in a game-high 22 points at Mackey Arena.

“If you said we would go to Purdue and win with Courtney scoring one point,” Smart said, “I would be surprised.”

Smart doesn’t necessarily have a problem with this yin-yang approach. It’s just that he envisioned both playing well together as the Longhorns start plowing through non-conference play. Perhaps this is how it goes after Ramey and Coleman both missed time with injures in the preseason. Ramey missed a few weeks with a wrist injury, and Coleman was out with a hamstring issue.

Also, Andrew Jones proved pivotal again, hitting four key free throws and getting a defensive rebound in the last 23 seconds. This came after his career-high 20-point performance in the opener. Jase Febres also buried a 3-pointer that gave Texas a two-point lead with 1:25 remaining.

Off the court, Smart was blown away by the reception Purdue fans gave Jones, who has overcome leukemia. Purdue fans hung a long black sign that had UT and Purdue logos tied together with a ribbon and the message “Andrew Jones Is Unstoppable.”

“Amazing,” Jones told the Indianapolis Star after the game. “That’s the first sign anyone’s ever done for me since I came back.”

On Monday, Smart said, “I thought it was an unbelievable class act on the part of Purdue students and their fans to support Andrew the way they did.”

Smart’s teams are well known for their fast starts. Last year’s team started 5-0 and even beat No. 7 North Carolina. But the Horns sputtered when Big 12 play began, stalled out in February and missed the NCAA Tournament.

Perhaps that’s why Smart is going low key at the moment.

“I think we’re making progress with our poise. We still we still have a long way to go,” the coach said. “Our biggest Achilles heel through two games offensively is turnovers.”

Texas has 31 turnovers combined in the first two games. And the Horns are minus-9 on the glass. So there is plenty of room for improvement, something Smart readily acknowledges.

“When you win a game like that you want to take all the positives and build on them,” Smart said. “And you want your guys to feel like, ‘Yes, we went and did that in a tough atmosphere on the road.’ But it doesn’t guarantee anything your next time out or against anyone moving forward.”